An appealing biopic with a perfectly cast Goodman in the title role, the film works simply because Goodman is so good at being the Great Bambino

A dramatized bio on the life of George Herman “Babe” Ruth, the first great baseball player who set world records.

At the age of seven, George Ruth is abandoned at a Catholic orphanage by his father, and it is there where the priests and administrators realize what a pain in the neck he is. But he’s good at one thing: Hitting a baseball with a bat. After fourteen years, the school decides to adopt him and sell him to a major league baseball team, the Boston Red Sox. Despite being chubby and ungainly, Babe (as he comes to be known, played by John Goodman) immediately shucks his naysayers by being a virtuoso hitter and quickly establishes himself as a one-of-a-kind baseball player. He becomes the first superstar player, and being a virtual kid due to all the years spent at the orphanage, he’s like a kid in a candy store everywhere he goes, heaping gifts upon his friends and being a Santa Claus to every kid he meets. When he woos a young woman (who’s 16) named Helen (Trini Alvarado), he wins her over by giving her everything she could possibly wish for, including a huge farm and all the animals she can take care of. The Babe’s fame rises as he continues smashing every record in the book with his home run hits. Over time, his partying lifestyle and carousing ruins his marriage and his winning streak, but when he marries a worldly dancer (nicely played by Kelly McGillis), he yearns to step aside and manage his own team, but first he has one final record to break, and that is to become the first player in history to score three home runs in one game.

An appealing biopic with a perfectly cast Goodman in the title role, the film works simply because Goodman is so good at being the Great Bambino. They could not have cast him better. The movie hits all the highlights and goes pretty quickly through the years, and even as we see the decline of The Babe’s health, we sense that the movie really made every effort to share this great ball player’s life story, despite also making every effort to make him out to be a big goofy kid who never really grew up. The performances are excellent, and Arthur Hiller’s direction gives the film some gravitas. Watch for Richard Tyson (Kindergarten Cop) as Ty Cobb. Elmer Bernstein did the score.

Mill Creek’s new Blu-ray release of The Babe contains a surprisingly crisp HD transfer, but sadly the disc does not contain any of the special features from the previous Blu-ray edition from Universal. The package is done in Mill Creek’s signature retro VHS-style. 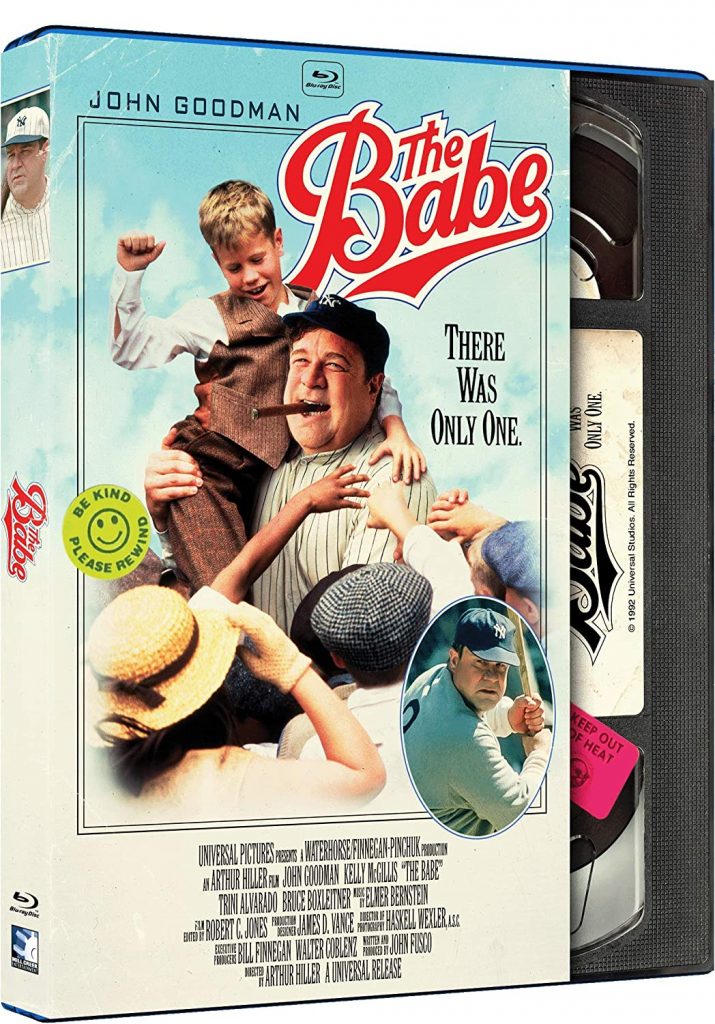