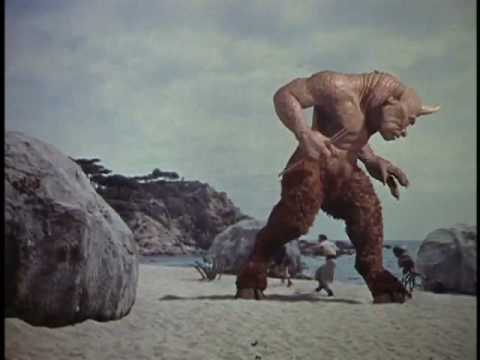 The 7th Voyage of Sinbad is a visual treat that delivers the thrills that you would expect from a movie of this kind.

Plot: Sinbad teams up with a shady sorcerer to travel to the island of Colossa and save his bride-to-be.

Review:  When we’re talking about adventure heroes, does Sinbad come to mind? I mean, there’s Allan Quartermain, there’s Indiana Jones, you could even say there’s Jack Sparrow (though I would content the latter is nowhere near in the class of the former).  However, Sinbad, the Sailor, has been around since the 15th century and first appeared in One Thousand and One Nights. He’s a classic character in every sense of the word and is worthy of getting the Harryhausen treatment.

The story told is adequate, and while it doesn’t make you go ooh and ahh while it unfolds, you also don’t have the urge to vomit into your own lap. I would say that it started out very strong, then seemed to lag a bit (I didn’t care about Sinbad returning to Bagdad or his fiancée getting shrunk to microscopic size), and then picked up mightily and sprinted to the finish. It was kind of jarring to see such an Anglo guy in the lead role which is meant for a person of Middle Eastern descent, but I guess you could say that about every Hollywood movie from the 50s (and 60s and 70s – hell, there’s probably a couple from last year).  The characters all play their parts well, with the real standout being Torin Thatcher as the sorcerer Sokurah. I don’t know what it is, but that guy is just gold. He just looks devious, and even when he seems to be following the right path, you get a sense that he’s going to turn around and stab you in the back at a moment’s notice. Thatcher, to me, is definitely the highlight of the movie, as far as the players go.

Though the real star of the show, as in every Harryhausen movie (at least the ones I’ve seen) is the creations. He goes all out in this one, and you can see his genius on display. The Cyclops has a great design, is just a menacing and terrifying creation and has so much character – I love the scene where he’s roasting some poor guy to death on a spit and pulls up a stool to sit down while doing it. The fight at the end of the movie between the Cyclops and the dragon is just awesome and goes on for a surprising length. The snake lady is neat, as is the two-headed rocs, even if they don’t really do much. Even the non-Harryhausen effects are great – I really liked the tricks they used to make actress Kathryn Grant appear much smaller than her actual height.

The sets are terrific, with the inside of the genie’s lamp and the inside of Sokurah’s cave being the standouts. The score is memorable and another excellent composition from Bernard Hermann – it’s all very heroic and fits well with the film. The action is top-notch – I mean, when a giant crossbow is fired into a dragon, when Sinbad fights an animated skeleton, when a group of sailors are trying to stave off an attack from a giant frickin’ Cyclops, what more could you want?

So, do yourself a favour and check this one out if you can. At 88 minutes, it’s not a drawn-out affair, and despite the short draggy part near the start, it’s pretty memorable from start to finish.