Skin Max has just released this pair of films on a double feature DVD in standard definition, both in the full frame format. This might be the weakest of the releases so far, but serious collectors of forgotten sex thrillers and / or sexploitation comedies might want to add it to their collections just to have it on hand. It’s a cheap purchase, but it’s the time spent watching them that’s expensive.

The future is bleak, gents: Sex has been outlawed, and procreation is done through test tube technology, and the planet is undergoing some kind of one-world government takeover. Two perpetually horny teenagers – Naldo (Brian Bremer) and Vin (Christopher Wolf) – find a way to travel back to 1994 to an all-girls’ prep school where they aim to stop the headmistress Camelia (Morgan Fairchild) from outlawing sex in the future, which, in turn, will turn the tide for humanity for the better. To hide the fact that they’re boys, Naldo and Vin stuff their shirts and don some crazy wigs and manage to fool the girls for a while, despite the fact that they refuse to take off their clothes in the communal shower and act like horn dogs while they traipse around the halls, exploring nubile female flesh for the first time. Meanwhile, a cyborg terminator (played by Don Dowe riffing on Ah-nuld, circa 1991) has traveled back as well, with his sights set to either kill or apprehend the two bumbling dummies from the future. The two ding dongs manage to get laid for the first time, get steady girlfriends, and all while dodging the militant headmistress, whose hard case approach can only be undone by a reprogrammed cyborg, who will turn out to be the man of her dreams.

As stupid as a quarter machine toy, but surprisingly sweet and sexy as well, Test Tube Teens From the Year 2000 is pure video store product from the early ’90s meant to fill a demand for lightweight sex and nudity fans, and on that front it delivers in spades. It’s a completely fluffy and pretty innocuous movie – and a spoof to boot – so if you get offended at nipples and long, soapy naked shower scenes, then look elsewhere for your kicks. Prolific exploitation filmmaker David DeCoteau shot this, and Morgan Fairchild (who shot her scenes in one take over five days) apparently hated the movie so much that she wrote DeCoteau a profane letter, which he framed on his wall. This is just that kind of movie.

A fashion photographer plots to kill her cheating husband … with the woman who’s her accomplice!

Rebecca (Amy Rochelle) has nightmares of drowning or of being sexually assaulted almost on a nightly basis, and it might have something to do with the fact that her husband Jonathan (Michael Baci) is a cruel, manipulative man who cheats on her with lots of other women and she feels suffocated by him. She keeps her and her husband’s photography and fashion business floating by being a professional and turning the other eye when she knows he’s sleeping with the talent, but she reaches a breaking point and plots to kill him with her friend and associate Gwen (Lauren Hays). When they get their chance, they poison him together and make it look like he drove off a cliff in his car. The next day, a pair of detectives come knocking and inform Rebecca that her husband’s car was found crashed, but there was no body, which raises some questions. Rebecca begins having daymares after that, seeing her husband Jonathan out of the corner of eye, imagining him having sex with Gwen in broad daylight, but is all this just paranoia or is she actually seeing these things? A few nights later a man breaks into her house with the intention of murdering her, but when she gets the drop on him (she drops her towel and stands naked before him), she manages to dupe him and grab his gun, forcing him to reveal that her husband hired him to kill her, but instead of being afraid of this information, she gets turned on by it and has sex with the guy! With the insistent detectives asking more questions with weird clues that shouldn’t have been found with the wreckage, Rebecca comes to realize that her husband is likely very much alive and playing mind games with her, which would also indicate that Gwen is working with him! If Rebecca is going to survive this twisted game that they’re playing on her, she’ll need to buck up and get smart before they do her in or frame her for something that could be the end of her.

Rebecca’s Secret almost has no business getting a full-length review written about it. Existing purely as an excuse to show as much graphic nudity and simulated sex as possible in its 82-minute time, the movie isn’t really concerned at all with its paper- thin plot, which anyone with a working mind should be able to figure out within a few minutes. Star Rochelle (who looks cross-eyed to me) is pretty horrendous in the leading role, and she’s perhaps best known for being Demi Moore’s body double in Indecent Proposal. She spends most of this movie completely naked and writhing around her bed in a state of confused euphoria, caught between dreams, nightmares, and what’s actually happening to her character. The movie is billed as being “R” rated, but I guarantee that is a mistake. This is as unrated as it gets, complete with accidental glimpses of male genitalia stuffed in black socks during the heated lovemaking sessions, and there is another glimpse of a woman with a small bit of protective tape over her genitals in another sex scene. You’re not supposed to see that stuff in these kinds of movies, which tells me that we’re getting some rather unedited takes. Long unreleased on any format, this film might’ve best stayed unreleased. From writer / director Ellyn Michaels, which sounds a lot like a pseudonym to me.

Skin Max has just released this pair of films on a double feature DVD in standard definition, both in the full frame format. This might be the weakest of the releases so far, but serious collectors of forgotten sex thrillers and / or sexploitation comedies might want to add it to their collections just to have it on hand. It’s a cheap purchase, but it’s the time spent watching them that’s expensive. 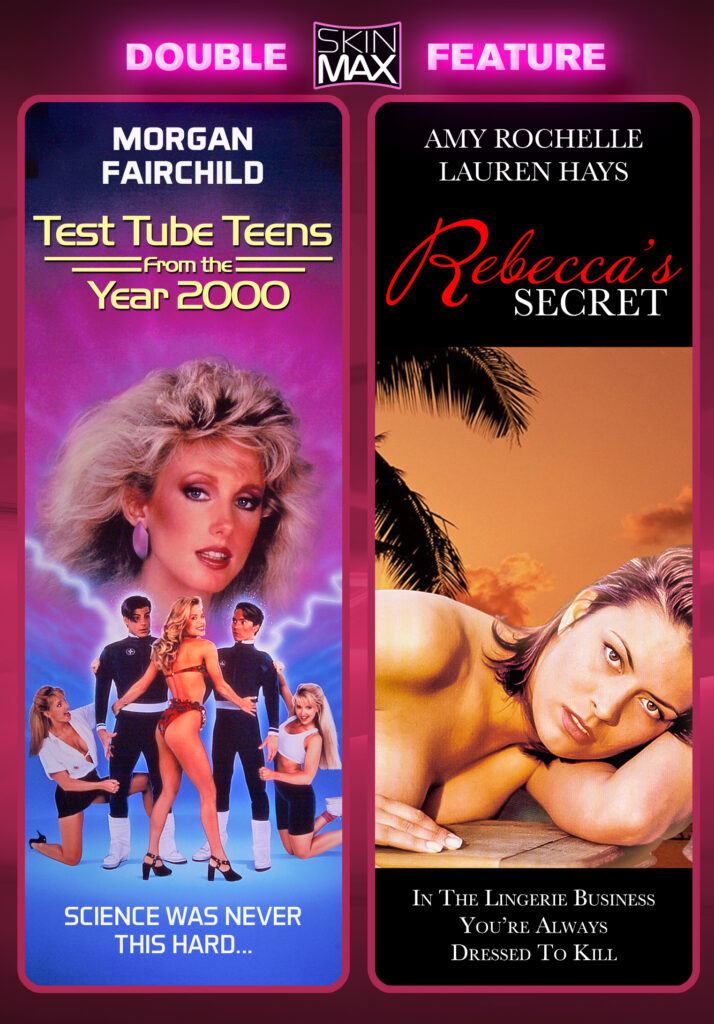