Terror Out of the Sky (1978) Kino Lorber Blu-ray Review

A made-for-TV sequel to another killer bee movie called The Savage Bees, Terror Out of the Sky works really well as a “creatures amok” kind of feature.

Two scientists and a pilot race to find a hive of deadly bees that could potentially wipe out one town at a time if they’re not exterminated quickly.

A scientific lab working on bees realizes too late that one of the hives they’ve harvested is infected with some kind of deadly strain rendering the queen and the rest of the hive ready to go on some kind of murderous rampage. With the hive already sold off to a farmer some distance away and the clock ticking before the bees go on their rampage, two scientists – David Martin (Efrem Zimbalist Jr.) and Jeannie Devereux (Tovah Feldshuh) – rush to right their wrong before things get dicey. David is sweet on Jeannie, but she’s sweet on someone else, a burly pilot named Nick (Dan Haggerty and his sidekick, a massive beard on his face), and Nick does them a favor by flying them to the farmer who bought the bee hive. But there’s a problem: The farmer doesn’t believe their outlandish story, and holds them at gunpoint even as they steal the hive away from him right in front of him under threat of being shot. They take the hive as far as they can, but they get waylaid in a small town celebrating the 4th of July, and when a group of Boy Scouts ends up in a school bus with Jeannie at the wheel and about a half a million bees swarmed all over the bus outside, a plan must be concocted very quickly to save the kids and the scientist before they either suffocate to death or get stung to death.

A made-for-TV sequel to another killer bee movie called The Savage Bees, Terror Out of the Sky works really well as a “creatures amok” kind of feature. The practical bee effects are incredibly convincing and scary, and because you know the actors are dealing with real bees and not CGI nothingness, the movie has an added level of intensity and gravity to it. With a significant body count and some gruesome looking bee attacks (even a cute little dog is killed in one scene), the movie should appeal to horror and creature movie fans. From director Lee H. Katzin.

Kino Lorber’s new Blu-ray release of Terror Out of the Sky comes in a new 2K master and looks great in its original aspect ratio (1:33:1), and comes with a new audio commentary by film historians and new cover artwork and a slipcase. 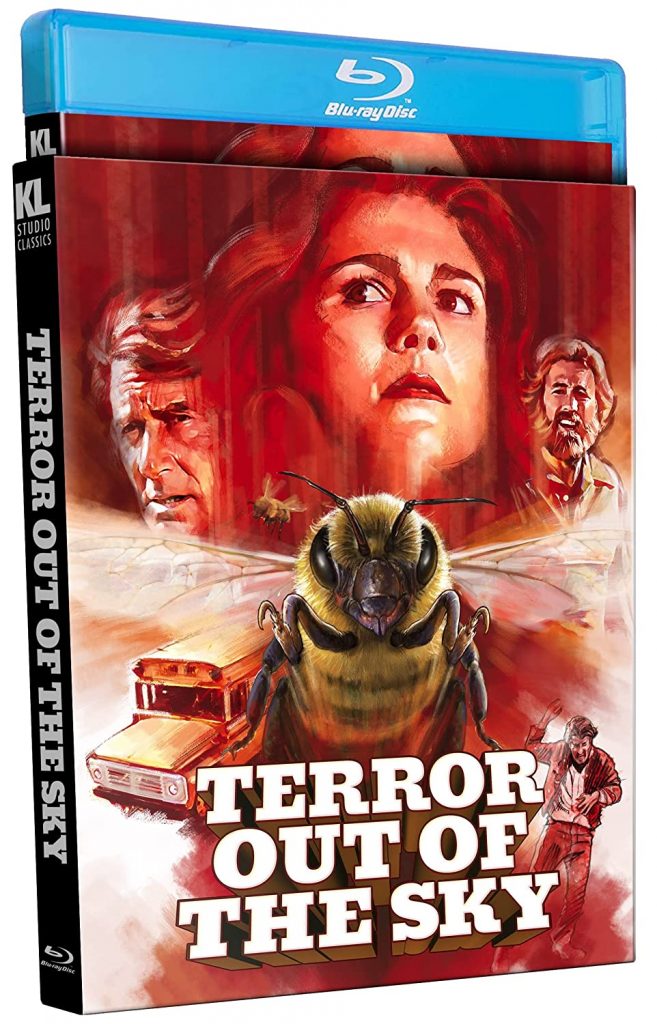