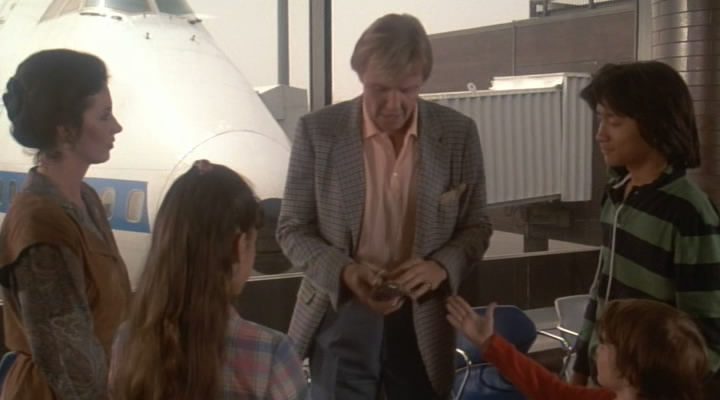 A sensitively told drama with excellent performances. The Blu-ray is superbly remastered.

Plot: J. P. Tannen takes his three children for a vacation cruise. They usually live with their mother and step-father, but now J. P. feels capable of taking them. Emotional tragedy strikes, causing battles parent against parent, and parent against child. J. P. tries to show his children that he loves them.

Review: Long estranged from his three pre-teen kids Tilde (Roxana Zal), Truman-Paul (Robby Kiger), and the adopted Trung (Son Hoang Bui), J.P. Tannen (Jon Voigt) makes a sincere attempt to reconnect with them by taking them all on an extended trip around the world, via a cruise. After getting permission from his ex-wife Kathleen (Millie Perkins) and her husband Mitchell (Richard Crenna, playing a power lawyer), Tannen soon learns that hanging out with his three kids, whom he hardly knows, is going to be a major challenge as he discovers that Truman-Paul has a severe learning disability (he can’t read) and that Trung has a lot of pent up rebellion and resentment brewing under the surface. Managing all three of his kids while trying to develop a relationship with an attractive single woman aboard the cruise is going to keep his hands full, while also testing his true intentions of why he decided to spend time with his kids in the first place. When a severe tragedy hits him out of left field (spoiler: his ex-wife is killed in a traffic accident), Tannen will have to contend with the reality of what that event will mean for him and his three children who have come to bond with him and love him.

An earnest and sensitive drama and coming of age film from the point of view of the three characters under Tannen’s supervision, Table for Five is a real heartbreaker of a movie, but its bittersweet story has some healing elements that don’t quite feel like bitter pills, which is a good thing. The drama never feels forced, and the events play out believably thanks to David Seltzer’s script (he wrote and directed the Corey Haim movie Lucas), and the performances are pretty great, especially Voigt’s, who really ingrains himself in the role. Also, special mention for co-star Crenna who skillfully navigates a complex role to a really triumphant conclusion. Directed by Robert Lieberman.

Kino Lorber’s brand new Blu-ray of Table for Five looks and sounds really nice, and if you ever got your hands on the Paramount DVD that was released about a decade ago, then you’ll notice the improvements in picture and sound. No special features are included on the disc, though.