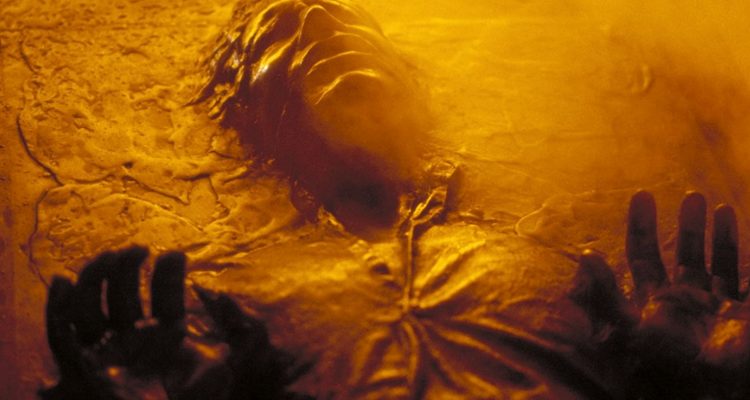 Empire is the most complete entry in the series with the Imperial Walker sequence remaining the sagas finest action scene, great character development and amazing visuals. John Williams is at his absolute best too.

Plot: After the rebels are overpowered by the Empire on the ice planet Hoth, Luke Skywalker begins Jedi training with Yoda. His friends accept shelter from a questionable ally as Darth Vader hunts them in a plan to capture Luke.

Review: Now we come to the greatest Star Wars movie of them all; Empire has always been my favourite, because it really goes into the mysticism of The Force.

We are introduced to the original (and best) Yoda where he imparts such classic lines as “Do or do not, there is no try.” His introduction is legendary, where you think he’s going to be comic relief but it all ends up being a ruse to test Luke. Speaking of Luke, he goes through a lot of mental and physical anguish in this one; finding out that a certain someone is his Dad, losing his hand and making out with his sister (yup). Han is tortured and isn’t even asked any questions and generally the good guys really are screwed.

The story to Empire seems straightforward on the surface, but there are so many deeper aspects and it’s definitely the most adult oriented of the films. It has similar themes to A New Hope, with the battle between Good and Evil being at the forefront, but we are introduced to a new dynamic; the relationship between Father & Son.

If you look past the aliens and the action, Empire deals with matters that we all deal with in our daily lives: Family and the choices we make.

Luke’s failure in the cave went way over my head a kid as I didn’t understand the complexity of it. Looking as an adult, Yoda says to Luke “A Jedi uses the Force for knowledge and defense, never for attack.” So Luke goes into the cave with his weapons (despite not needing them) and  sees the phantom of Darth Vader. When the mask explodes and Luke’s face is revealed, he is seeing that he could become like his father; he needs to leave his anger and aggression behind or suffer his father’s fate, he will.

One of the other main themes is on the use of technology against nature, which I’ll go into when reviewing Jedi.

But enough of the psychobabble; Empire has the greatest battle scene of all time, starring the Imperial Walkers and Snow-Speeders. After all this time my jaw still drops at the sheer spectacle of it, as a child I was wide eyed, as an adult even more so.

John Williams is at his all-time best with Empire as he introduces us to the Imperial March, the best bad guy music ever. Yoda’s theme is also beautifully intermingled with the Force theme. It is playful and yet filled with a hint of sadness and regret.

We also get to see Boba Fett for the first time and he’s at his coolest/coldest. I still prefer the original voice rather than Temuera Morrison; although he is still awesome.

One of the few things I really like about the Special Edition version is the addition of Ian McDiarmid as the Emperor in that one scene with Vader. It really helps the continuity with the other movies. However, if I was the guy who played him in Empire originally, I’d be pretty miffed.

Overall, The Empire Strikes Back is not only the deepest of the Star Wars Saga it is easily the best. If you think Phantom is better than this, you need your head examined.