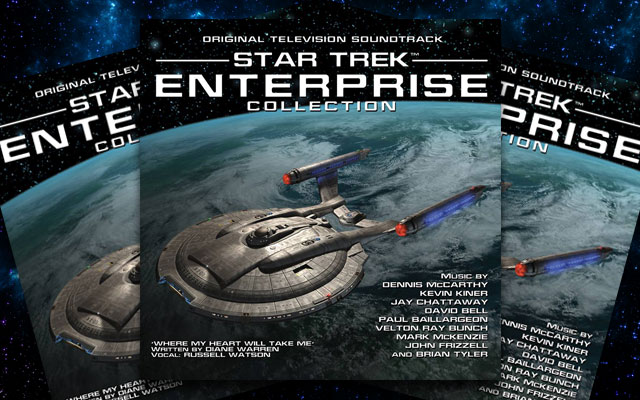 Most of the music is rousing, conflict-driven cues with heightened emotional action interludes, and if you’re an avid fan of all things Star Trek, then the music will be welcome to your ears

Review: Our friends at La La Land Records have been releasing tons of great material over the past ten or fifteen years, and they’ve been the champions of releasing music from the Star Trek universe that had until then never been released in any format before. They’ve been producing some beautifully packaged four-disc sets from the Star Trek universe, including two sets from Star Trek: The Next Generation, one set (so far) from Deep Space Nine, one set (so far) of Voyager, and two sets from Enterprise, as well as a massive box set from the original series, as well as the complete scores from Star Trek The Motion Picture and Star Trek V: The Final Frontier.

Their first collection from Enterprise includes music by composers Dennis McCarthy, Kevin Kiner, Jay Chattaway, David Bell, Paul Bailargeon, Velton Ray Bunch, Mark McKenzie, John Frizzell, and Brian Tyler, and includes almost five hours of music. It’s a hearty listen, with more music than you can listen to in one sitting. There are variations of the theme song “Where My Heart Will Take You” by Russell Watson, and “Archer’s Theme,” as well as a revisiting of Jerry Goldsmith’s theme from First Contact. Most of the music is rousing, conflict-driven cues with heightened emotional action interludes, and if you’re an avid fan of all things Star Trek, then the music will be welcome to your ears. There’s so much content here, but it hardly scratches the surface as far as how much more music there was for the series.

La La Land’s pristine treatment of this body of music comes complete with a thick insert booklet as well. It’s limited to 3000 units, so if you’re in the market for some Star Trek music, look no further.