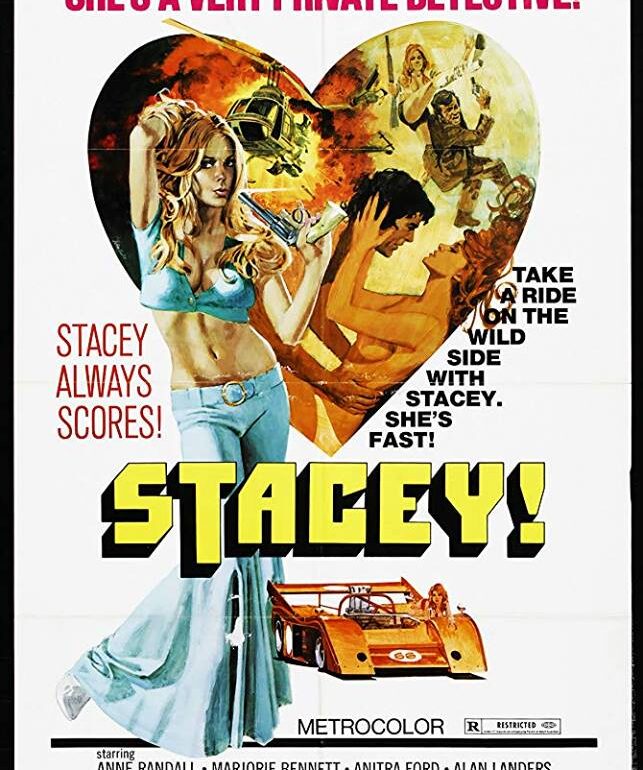 Review: Murder, mayhem, and mystery come together with beauty, bullets and boobs in 1973’s Stacey, the first feature film directed by cult legend Andy Sidaris, the former director of TV staples such as Monday Night Football and Wide World of Sports.  Stacey, the title’s namesake (former Playmate Anne Randall), is a car and gun savvy “centerfold private eye” hired out by a rich elderly California woman to investigate her family household and determine to whom her inheritance might be best suited.  Sure enough, the lot of them have skeletons in their closet comparable to the real life events which occurred in Brentwood a few decades later.  After meeting numerous sleazy family friends, associates and cult-like figures of interest, it isn’t long before Stacey uncovers a sinister plot and finds herself a target of spying and attempted murder.  The whole thing leads to car chases, helicopter chases, shootouts and of course numerous bare breasts, each element soon becoming a Sidaris staple, much to the audience’s enjoyment.

This first effort by Sidaris is rather unrefined, but Stacey is still a fun movie indicative of the creativity that comes from ’70s “exploitation” flicks.  Despite what some might call a gimmick in casting gorgeous women straight from the pages of Playboy, Anne Randall’s portrayal of the title protagonist is actually rock solid and very well written, establishing her early on as not only gorgeous and sexy, but also a credible and strong person, easily holding her own when confronted physically, getting creative when necessary, not putting up with any nonsense and displaying resourcefulness as well as an ability to sense developing plot twists (mostly to inform the viewer) as they come along.  Supporting actors are usually either other attractive women or sleazy (or just bland) men, but most do a decent job of making the viewer either sympathize with or despise them.  The narration is a fine idea but seems to fall off a bit more towards the end, especially since there is very little dialogue at all in the latter half of the film due to the prolonged racing-chase-gunfight scene.  The last lengthy stretch is great in theory, but drags on in practice, with little actually happening until the final gunfight despite all the quick cuts, leaving the viewer staring rather than reacting.  The story ends up being rather quickly tied up near the end as a result.  Other than the action scenes and actresses themselves, there is little memorable about the scenery or locations, with most of the race car elements serving as product placement.  On the other hand, the upbeat Don Randi soundtrack is about as ’70s as it gets.  The final few minutes of the action are rather enjoyable, however, and what little interesting dialogue ultimately presented is carried almost entirely by Randall, a testament to her screen presence in this film.

While Sidaris by no means hits a home run with Stacey, it at least shows he was a heavy hitter for his first time at the directorial plate.  Sidaris would address and improve upon virtually every one of the movie’s shortcomings by essentially remaking it twelve years later in his 1985 film, Malibu Express.  The next quarter century of Sidaris films after Stacey would show just what he was capable of in revealing a magnificent, nearly perfect set of… feature films.