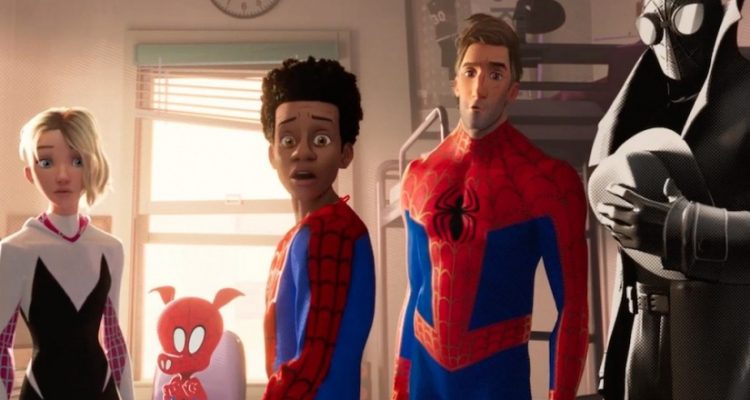 Spider-Man: Into the Spider-Verse (2018) Review

Into the Spider-Verse is a promising film that is torpedoed by the jittery animation and inability to make out what was happening at times.

Plot: When the Kingpin in Miles Morales’ reality uses a particle accelerator to bring back his dead wife and son, he brings back Spider-Men from other universes. Together, they must stop Kingpin from destroying all of reality.

Review: I have to admit, I am not a fan of Ultimate Spider-Man. Just the idea that iconic Marvel comics have to re-invent themselves in order to appeal to a younger generation just does not sit well with me. That being said, I was stoked for this movie, as Spider-Man is one of my favourite comic book characters of all time. However, what I got was a bit of a mess that wasn’t helped out any by the horrible animation that danced across my eyeballs.

But first, let’s just start with the characters.  The main character, Miles Morales, who is the Spider-Man in the Ultimate universe, is okay.  I don’t hate him, I don’t love him.  However, the filmmakers seem to hate him – why else would they need to bring 5 other Spider-Man heroes over to his world to stop a threat? As the resident Spider-Man, can’t he do it alone? Oh, that’s right, he’s just learning his powers! Silly me.  So maybe in the next film, he could stop someone by himself.  Maybe.  I ask though, what kind of a movie has so little faith in its main character that it has to bring him that much help?  Wouldn’t it have been better to establish Miles as a hero before bringing all the other characters over to dwarf him? Also, why is Peter Parker an absolute loser in this version of the film? Couldn’t we just have had, y’know, Spider-Man?

The animation was atrocious.  It was jittery and just…weird.  I didn’t know if there was a problem with the projector when the film was playing.  It was like stop-motion, but the kind of stop-motion where you think the guy who is animating the film is an amateur or something.  Not Ray Harryhausen stop-motion, more like 6-year old mentally deficient stop-motion.  It kept knocking me out of what was going on, making me wonder what in the hell the filmmakers were thinking.  It throws everything off-kilter and makes things blurry and sometimes hard to see. It’s just such a bizarre choice for this movie, I’m not quite sure what they were trying to do.  The sound was also intrusive, sometimes swelling so loud that I couldn’t hear the dialogue (though that might have been just the sound in the theatre, and not the movie’s fault).  Also, some of the designs were flawed with the Kingpin standing out as a blocky mess.

The movie wasn’t all bad.  I quite liked the Doctor Octopus character they had in it, and I generally liked all of the Spider-Man characters other than Miles and Peter Parker, with Spider-Man Noir and Spider-Gwen standing out to me. The Prowler character was great, and I’m glad that both he and Tombstone finally got the big-screen treatment. The movie was well-paced, and I feel that the story had the best of intentions at heart, it just all got screwed up by a pretty bad stylistic choice of how to animate the movie.  Seeing as how this is an animated film, there’s just no way around it.

I’ve heard this movie is getting a lot of praise, which I can’t say surprises me in the least.  People always applaud something for being different, no matter how nonsensical or unnecessary it is. I guess that the animators were trying to emulate a comic flipbook, but quite simply, it doesn’t work, and it undermines all of the positives with the movie.  It’s borderline unwatchable at times, and really in this day and age, there’s no excuse for this type of shoddiness. We’ve advanced to the point of the creation of entire worlds in the circuits of a computer, you would hope by now we’re past making animation that is too choppy to watch.