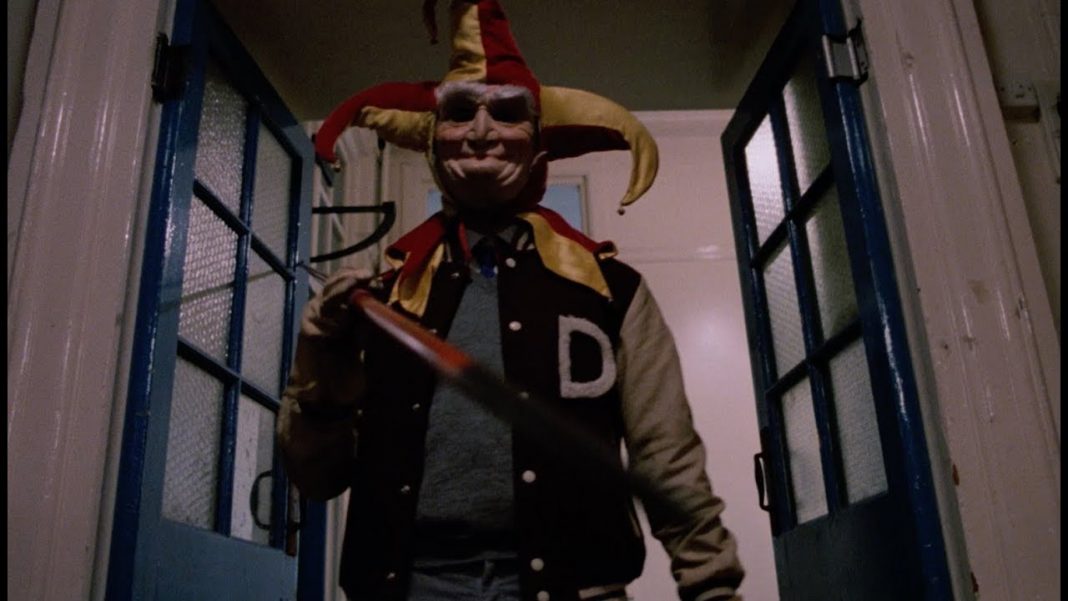 Slaughter High has never looked better than it does here. The themes have held up very well for today’s audiences but the actors are WAY too old to be playing teenagers. The movie has a weird vibe to it that isn’t necessarily intentional.

Plot: Eight people are invited to their old high school for their ten-year reunion where a fellow former student, disfigured from a prank gone wrong, is out to seek revenge.

Review: A whole squad of popular teenagers pulls two horrendous pranks in a row on nerdy outsider Marty (Simon Scuddamore), leaving him terribly scarred for life. A decade later, they’ve all grown up and chosen career paths (one of them – the class beauty, played by Caroline Munro – has become an adult film actress), but they’re all still the same selfish, horrible people they were in high school. Around the time of their 10-year high school reunion, they all receive an invitation to their abandoned high school for a class reunion, but no one seems to notice or realize that it’s April 1st … the same day they pranked poor Marty. When the doors shut, they’re all locked in the school with a masked assailant who has prepared for them a grisly game of cat and mouse. One by one, the bullies are dispatched in creative, bloody ways, leaving the final girl (Munro) to have a showdown with (surprise! but not really) Marty, who gleefully declares that he’s shown them all who’s boss.

Much stronger and more gruesome than I recall from when I watched this on VHS years ago, the UK slasher Slaughter High is surprisingly relevant in today’s cyber bullying era, where kids commit suicide after being relentlessly harassed online by kids their own age. In the uncomfortable scene where Marty is mistreated at the beginning, he’s naked and being filmed on a camcorder by his attackers, which feels remarkably prevalent in today’s “revenge porn” or invasion of privacy mentality. Personally, I was kind of rooting for Marty to win, but an odd twist at the end puts the whole movie in a “did it happen?” perspective. The actors – particularly Munro who was in her mid-30’s when she shot this – are way too old to be playing high school teens, and Scuddamore, who played Marty, committed suicide before the film was ever released. It gives the movie an unsettling pall that is hard to shake off. The gore effects are pretty good, with some shocking on-screen kills, and directors George Dugdale, Mark Ezra, and Peter Litten all shared directing duties.

Numbered at #12 in the Vestron Video Collector’s Series, Slaughter High has never looked or sounded better than here on Blu-ray. With a digitally restored image, and tons of choice special features including audio commentaries, on-camera interviews, and an alternate ended (as well as trailers and all that jazz), this is a solid release.