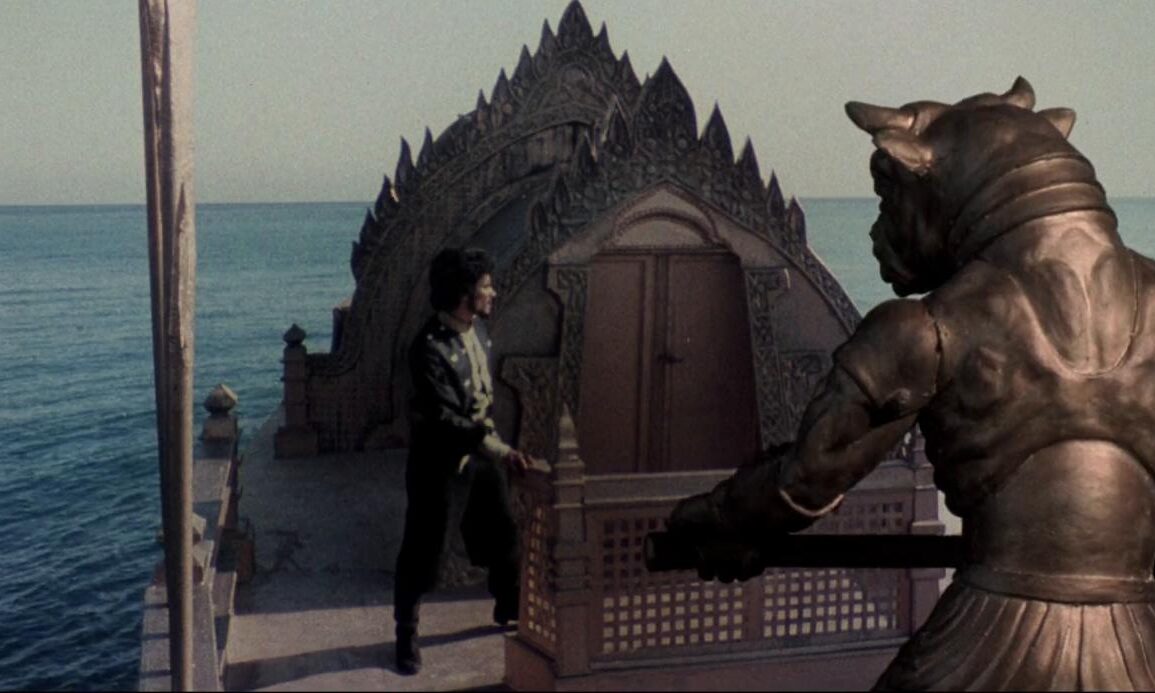 A fun movie that is almost torpedoed by a miscast hero, but saved by a spirited performance by Patrick Troughton and Harryhausen’s fantastic creatures.

Plot: Sinbad travels to an ancient shrine to restore a transformed prince, while chased by an evil witch and her son.

Review: Sinbad and the Eye of the Tiger is really a tale of two movies. On the one hand, you have, without a doubt, the worst Sinbad ever committed to film. On the other hand, you have Patrick Troughton, who effectively becomes the hero of the movie, as well as the typical adventuring and Harryhausen creations that are hallmarks for these films.

Patrick Wayne, John Wayne’s son, is cast as Sinbad, and there possibly couldn’t have been a worse choice for the role. He isn’t quite as miscast as his father infamously was as Gengis Khan, but it’s close. It’s not really Patrick’s fault per se, as I know he can turn in a decent performance (as he did in Big Jake), but he just doesn’t work as Sinbad. The dialogue was written for an actor whose native language is not English, but it doesn’t fit with the all-American Wayne.  The lines end up coming out stilted and wooden from his mouth.  Then there’s Margaret Whiting as the villain Zenobia. I don’t know what direction she was given, but her accent makes her sound like Natasha from Rocky and Bullwinkle – it’s pretty bad. Throw in the fact that Zenobia does next to nothing other than sail around after Sinbad, and you have someone who posed next to zero threat to the heroes.

Thank God for Patrick Troughton.  I think even the filmmakers halfway through the movie realized that he was more of a hero than Wayne was, as it seemed his role expanded as the movie went on. There’s a part where Zenobia instructs her son to kill Troughton’s character as “he is too valuable to them [the heroes],” and I felt like remarking that he’s too valuable to the audience as well – he basically saved the movie. Taryn Power and Jane Seymour are in it as well, as eye candy (which they certainly fulfilled, especially with the sunbathing scene), but don’t offer a lot else. The movie is Troughton’s to run away with, and to their fortune, he did just that.

As for Harryhausen’s creatures, they were as awesome as usual. He didn’t really go the fantastical route with this one, concentrating instead on animals (which were realized remarkably well), but we did still get the ghouls at the beginning of the movie (which had an awesome design) and a Minotaur automaton (which was not utilized as well as it could have been —it just basically rowed Zenobia’s ship).

The action is decent, with the highlights being another creature battle (this time between a Troglodyte and a Smilodon), as well as the crew battling a giant walrus in a raging snowstorm (both of these battles being central highlights to the film). The score again is boisterous and rich, but it falls flat only because the characters on the screen can’t match its grandeur. Don’t get me wrong, they do give it the old college try (and Wayne made me laugh out loud at one point in remarking on his chess-playing skills), but it just didn’t work. The sets were as well made as always, and I greatly enjoyed the design of both the Shrine and the island of Hyperborea, which gave some different looks than the previous Sinbad films.

While this entry was definitely not on the same level as the other two Harryhausen Sinbad films, it has its moments and still offers a modicum of entertainment.  If for no other reason, check it out to see the Duke’s son try and earnestly play the title role.