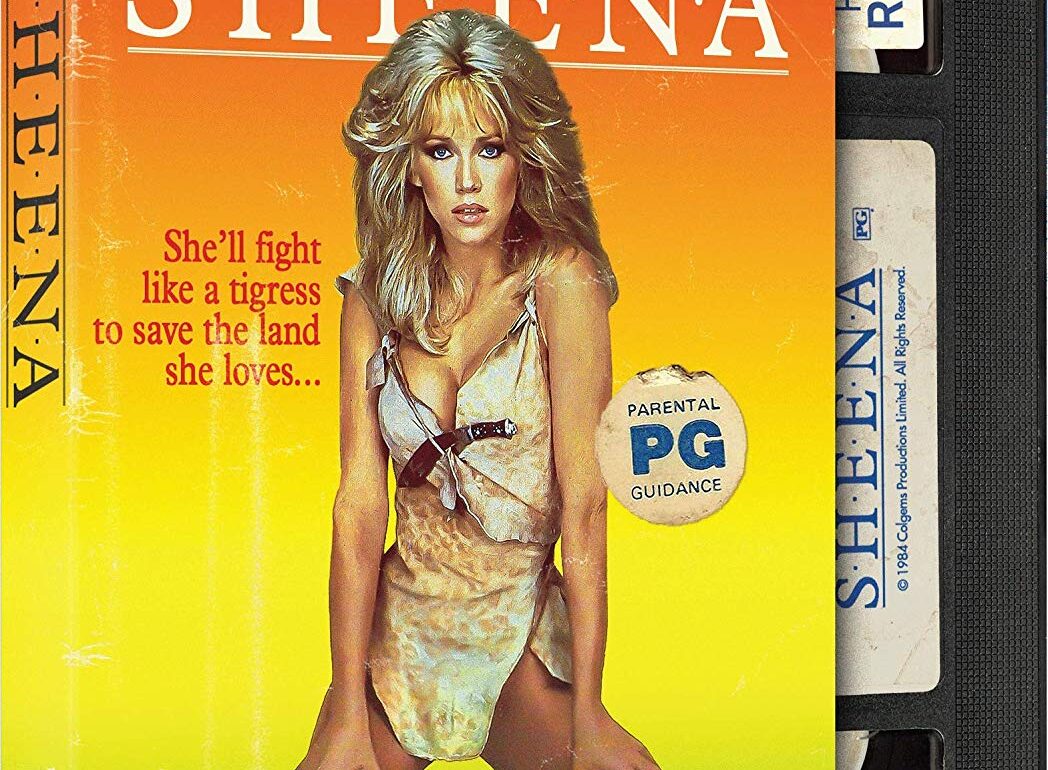 I have nothing but big love for this movie, and I’ve owned it on VHS, DVD, and now on Blu-ray, thanks to Mill Creek.

Plot: Sheena grew up in the African wild, raised by a mystical witch woman. When her foster mother is framed for a murder Sheena is forced to flee, helped by her ability to talk to animals and her knowledge of the jungle.

Review: A prophesy is fulfilled when a little blonde girl is orphaned in Africa and adopted by a Zambouli tribe: They believe that this girl will grow up to liberate the tribe and save their people. They name her Sheena, and she grows up to be a knockout, played by Tanya Roberts from The Beastmaster. To suggest that this Amazonian Barbie should become a Playboy Playmate ASAP would probably be sexist, but damn it all if it didn’t come true. Sheena is able to communicate with animals on some kind of psychic frequency, just like Dar from Beastmaster. She swings from vines like Tarzan, and she bathes naked in lakes and waterfalls in an unabashed bravado. Does she care that white guys ogle her nudity? Why should she? When a dopey journalist (played by Ted Wass from Curse of the Pink Panther) from America flies into the country to do a story on the prince of a neighboring tribe, he inadvertently becomes the catalyst for the prince’s downfall when the prince has his own brother murdered, framing a shaman from the Zambouli tribe. That’s where Sheena steps in: She stages a brash escape for the shaman (using rampaging elephants, chimpanzees, and rhinos), setting the stage for a grand chase through the jungle, as the evil prince sends mercenaries after her. The journalist follows the beautiful jungle girl (so would I, frankly), and what transpires is a love story and adventure of the highest order. Sheena falls in love for the first time (and there’s a great scene where she’s mystified by his hairy chest), saves the guy’s life, and also fulfills the prophecy surrounding her destiny.

Sheena and I have a history together. When I was just a boy, this was the very first videotape I rented when we got our first VCR. I believe Rad was my second rental. I fell head over heels in love with Tanya Roberts, thanks to her innocent performance, and her several incredible nude scenes. Critically panned by critics and considered a “worst movie ever made” by many, the film is quite endearing to me, and it holds up as a cinematic adventure. The score by Richard Hartley is gorgeous and sensuous, and John Guillermin’s direction is just what this movie needed. He also did the ’70s King Kong and its sequel King Kong Lives. I have nothing but big love for this movie, and I’ve owned it on VHS, DVD, and now on Blu-ray, thanks to Mill Creek, which has just released it in a VHS-styled retro looking edition. It’s an appropriate way to release the film. I also compared the transfer to my DVD edition, and this high definition transfer is by far a cleaner and crisper looking way to watch it. Sadly, there aren’t any special features, but it’s affordably priced to own.