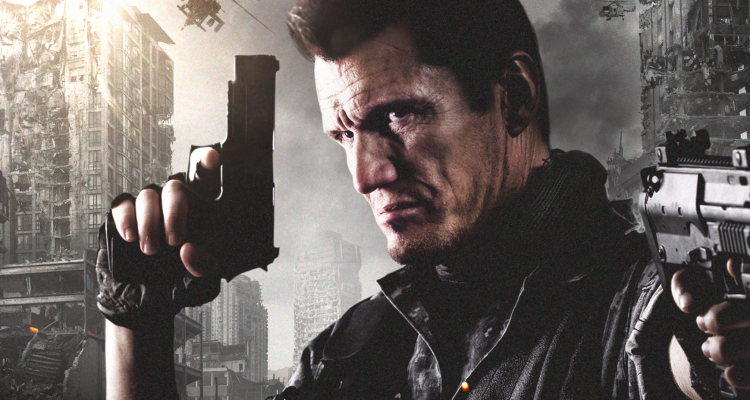 Lundgren completists need it. Zombie movie fans may need it as well. Anyone else? You decide.

Plot: A mysterious virus has killed billions and turned many others into bloodthirsty zombies. Unable to stop the virus, the government develops a video game, “Dead Trigger,” that mirrors the terrifying events that curse the world.

Review: By 2025, a virus has killed billions and has rendered millions more into the walking dead. The government needs a plan pronto. They create a propagandized video game for the youth of America: A virtual reality console game called Dead Trigger that puts teenagers and young adults in a first person scenario where they are dropped into missions with the intention of killing as many zombies as possible without getting bitten or scratched. The government looks at the players’ scores and selects the best players to join the movement for real. In one such case, about a half a dozen young men and women are culled with the reward of a vacation in Hawaii after accomplishing a mission. They are delivered to a group of seasoned “Dead Triggers” who will train them in a boot camp-like system, with an emphasis on gun and hand-to-hand combat training. Their taskmasters are Walker (Dolph Lundgren), Rockstock (Isaiah Washington), and Martinov (Oleg Taktarov), who have seen more young Dead Triggers die in action than they care to count, but with a new mission to travel to zombie infested Terminal City to retrieve an experimental serum that could lead to a cure for the virus. As expected, the mission turns into a total disaster with the new recruits dropping like flies, but more importantly with one of their own team turning coat for profit. It’ll be up to Walker to save the day, and the rest of the world.

Trashy and cheap, the ugly looking Dead Trigger was a troubled production with constant rewrites and the original director getting fired, but despite its many shortcomings it remains somewhat enjoyable simply because it’s another chance to see the lanky and lean Lundgren destroy zombies again. He did it once before in Battle of the Damned, and while that one was marginally better, this one is structured like a video game (and is based on one as well). If you’re thinking of seeing it, then you’re this film’s audience. It’s junk, but who cares? The credited directors are Mike Cuff and Scott Windhauser. Shot in Mexico and Utah.

Lionsgate’s Blu-ray / digital combo release presents the film pretty much “as is,” without any special features. Lundgren completists need it. Zombie movie fans may need it as well. Anyone else? You decide.