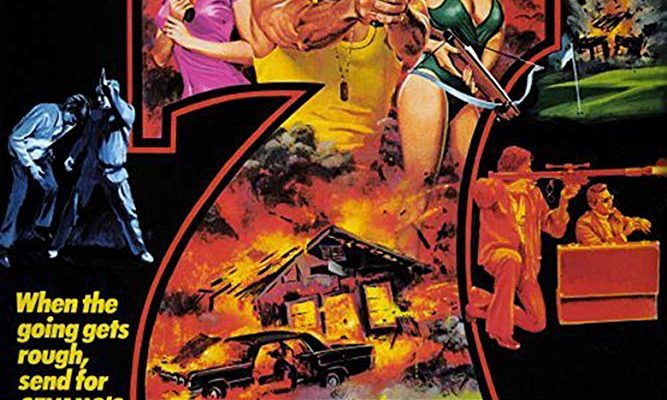 Crime meets its match in a cunning cabal of biceps, babes and bikinis in Seven, from Sidan Productions and Andy Sidaris, with tons of action, memorable scenes, numerous majestic Hawaiian locales and all kinds of recognizable cast members – a must-see for any self-respecting Sidaris fan.

Review: Crime meets its match in a cunning cabal of biceps, babes and bikinis in Seven, from Sidan Productions and Andy Sidaris, his second effort since 1973’s action mystery, Stacey.  After several bold moves in the criminal world result in the assassination of diplomats, a government agency reaches out to mercenary Drew Sevano (William Smith, Conan the Barbarian) to assemble a team of specialists to counter the crime bosses before they can assume and consolidate power in Hawaii’s criminal underworld.  Sevano agrees… as long as the price is right.  He hires talents ranging from a sharpshooter cowboy (Guick Koock, Laverne & Shirley) to femme fatales (Playboy Playmates Barbara Leigh and Susan Kiger) and a wisecracking intellectual (Richard LePore, Stacey) among others (including Police Academy‘s Art Metrano and Elvis bodyguard Ed Parker), to form a team of seven in order to combat an equal number of crime lords with their own hired guns, led by The Kahuna (Lenny Montana, The Godfather).  As can be expected of a Sidaris film, expect plenty of explosions, crazy actions scenes, and of course lots of boobs.

With tons of action, memorable scenes, numerous majestic Hawaiian locales and all kinds of recognizable cast members, Seven is a must-see for any self-respecting Sidaris fan.  Connoisseurs of ’80s classics, cult or otherwise, should recognize a significant number of the cast from some of their other work right away, and many of them are just as colorful here as anywhere else.  It is virtually impossible to miss a young Martin Kove, Terry Kiser or Art Metrano (who even performs a brief stand-up routine later on) when they appear onscreen.  Sidaris hits a stylistic stride in this film, with plenty of elements being repackaged in his later work.  Many of the characters are funny and appealing, and Christopher Joy’s character even has his own “blaxploitation” style soundtrack theme start up whenever he appears onscreen.  Some of the gags and sequences seen here would end up being reused just as memorably in later Sidaris efforts, including dummies falling from buildings, blow up dolls, guys getting knocked into the air by vehicles, and so on.  But while the idea of numerous specialists with unique personalities makes for very organized and sequential writing, many of the protagonists and their inverse targets are a tad light on depth and time devoted to their personalities.  Despite some limited screen time, Richard LePore owns many of the more humorous scenes, while many of the former Playmates in the cast supply both sex appeal and plot twists.  A vast improvement in nearly every way upon an already decent first effort in Stacey six years prior, Seven builds upon the Sidaris foundation laid in paradise and starts raising the flag of what would soon become Malibu Bay Films and an ongoing film series the likes of which none have ever managed to quite duplicate effectively.