A quirky caper comedy with a stellar cast before a lot of these guys made it big, Safe Men thinks its funnier and more clever than it actually is, but it’s amusing to a point if you can get on its somewhat lazy wavelength.

Two dim-witted singers are mistaken for the best safecrackers in town.

Playing to dazed old folks at echoing bingo halls, Sam (Sam Rockwell) and Eddie (Steve Zahn) are just about the worst there is as far as lounge singers go: Their songs suck (even their covers are bad), and their instrumental skills are questionable at best. But they have one thing going for them – they’re perpetually upbeat and chipper, despite the lulls and lags between lackluster gigs. While out playing pool at a dive bar, they’re mistaken for the two best safecrackers in town, another pair of goofballs named Frank (Mark Ruffalo) and Mitchell (Josh Pais). The guy who makes the mistake is a go-to schlub named Veal Chop (Paul Giamatti) who works for the local Jewish gangster Big Fat Bernie (Michael Lerner), and when Veal presents a can’t-lose offer to crack a safe with hundreds of thousands of bucks in it, Sam and Eddie stupidly accept the offer, but get duped in the process. Veal Chop clobbers them (it was a trap!) and offers their sorry souls to Big Fat Bernie, who has summoned them to do three safe cracking jobs for him in a one-week period. Not having the option to refuse now that they’ve assumed the identities of the real thieves, Sam and Eddie are faced with certain doom because when they try cracking their first safe, they not only don’t know how to do such a thing, but they’re too stupid to weasel their way out of it by skipping town or some other easy way of escape. But then a stroke of luck happens: The second safe is cracked by Frank and Mitchell, and Big Fat Bernie thinks Sam and Eddie actually did the job, which cements their street cred, putting these two knuckleheads on a collision course with destiny. With Big Fat Bernie’s kid’s bar mitzvah coming up and a huge score for Sam and Eddie to somehow steal from a rival gangster in town, there’s only one way these two guys are going to stay alive … by sheer, dumb luck.

A quirky caper comedy with a stellar cast before a lot of these guys made it big, Safe Men thinks its funnier and more clever than it actually is, but it’s amusing to a point if you can get on its somewhat lazy wavelength. I chuckled once or twice, and writer / director John Hamburg (who wrote Zoolander and Meet the Parents) hadn’t quite achieved what I’d consider a zenith of his skills as a screenwriter, but this was an admirable and auspicious debut for him, setting the stage for a successful career in comedic hits.

Mill Creek’s new Blu-ray edition of Safe Men comes to high definition for the first time on disc, and the transfer is nice and sharp. No special features are included. The disc is affordably priced to own. 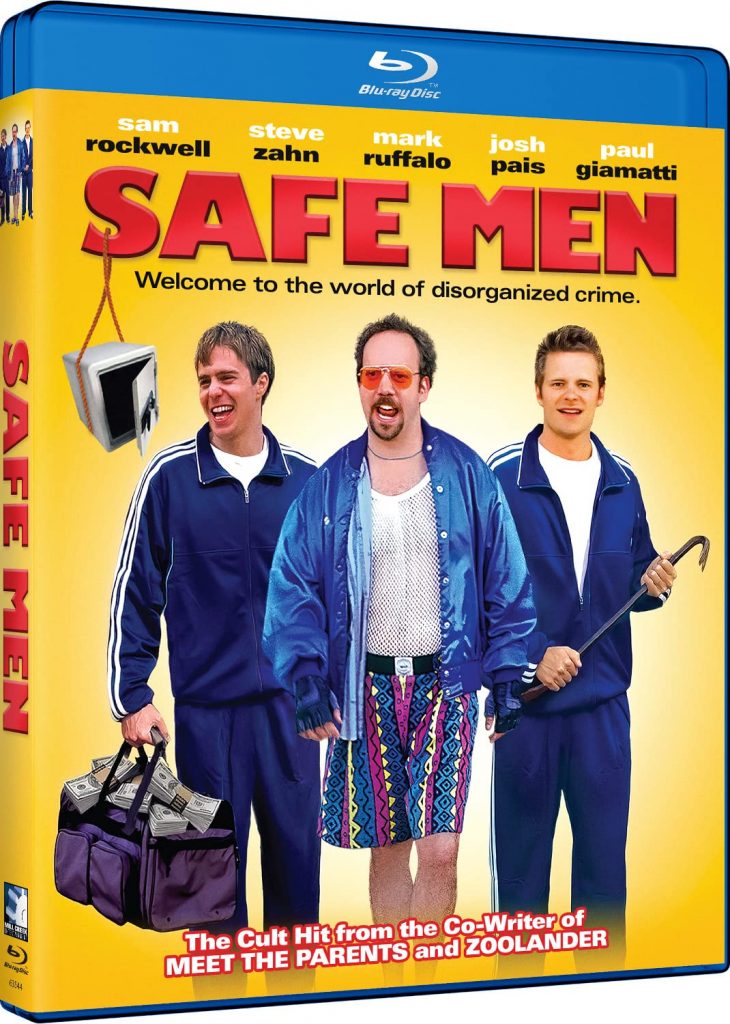