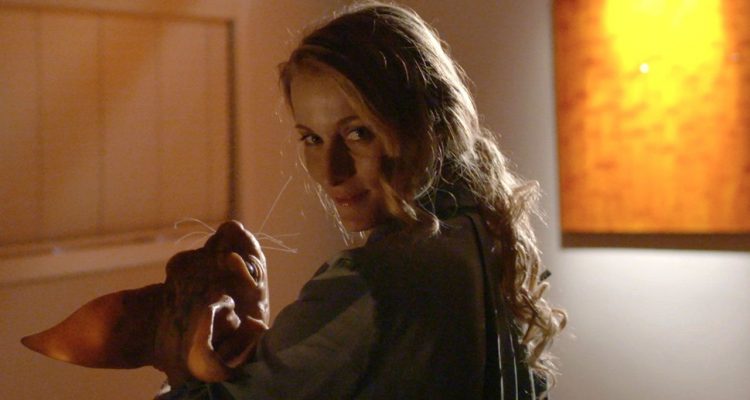 Ahead of the film’s Kickstarter campaign in January, we spoke to Moggy Creatures actress Sadie Katz about the film, the trailer that led to the film, and her career in horror.

Congratulations on yet another horror film! Is it Ok to call you a scream queen now, Sadie?

Thank you! You can call me whatever you’d like, as long as you keep calling me!

You’ve worked with the Moggy Creatures gang before, I believe?

I have! They’re gluttons for punishment. I’m kidding. Actually, in “House of Bad” I almost crashed Scott Frazelle’s prized truck we used in filming. I didn’t set the parking brake and it went rolling down the hill. He had to jump into the truck while moving and save it. Anyway, he forgave me so…that’s good. Seriously, there’s nothing better than working with a crew you’ve worked with before because, it’s like family and you kind of already know your working style. The big boys do it all the time…Depp & Burton, Apatow- sometimes indie filmmakers are resistant to recast actors they’ve used and that puzzles me because, on lower budget films you’re worker at a quicker pace and it’s so much better to actually be familiar with the way we all work together. There’s no first day jitters! You’re like okay…let’s do this! It’s such a gift.

What was it about this project that initially appealed to you, besides working with the House of Bad crew again?

Frazelle wrote a really great screenplay. I think what makes it something other than just a creature feature which is cool too…is it’s a story of a couple going thru a loss. So there’s a gravity to the story that really makes you care about the characters which keeps it from being just straight camp which ups the scare. It’s also a very sexy story which if you’re doing a killer cat movie I think it has to be sexy because, cats are sexy. Hairless cats are so slinky and kinda creepy but, they move so predatory. They’re almost out of this world. I don’t want to give away any plot points here…but, there’s outside influences from the husband’s work life that kind of mirror what the cats do to the marriage- the script is just clever that way. When you read a lot of horror scripts and you read something like what Frazelle wrote you get all stoked because, you’re like “finally.” Scary AF and smart. Ding, ding, ding.

Were the cats actually there? Were they practical props?

I’ve never seen a hairless cat before the shoot. Which is kind of funny because, everyone is just shooting and we are waiting for the cat to show and then the cat gets there and like everyone gets like a kid. The owner was there who is the nicest, coolest chick ever and this is her baby, you know? So, we are all trying to play it cool but, this is a strange looking animal. It’s her baby but, you just want to watch this cat move because it doesn’t move like a regular cat. It kinda slithers. We had the cat’s favorite toys and anchovies and the lights are on and the set is starting to smell like anchovies and the cat is well, being a cat doing it’s own thing and we need it to nuzzle up to me and I’m like this cat and I gotta make friends but, it’s a cat and well cats make friends with who that want. We all had to sorta wait it out and the footage we got was very cool.

On the flip side- Frazelle had these incredible prop cats with  puppeteers operating these lifesize cats that were absolutely terrifying. The pointy ears, crazy long tail, the lights were throwing these nasty, gnarly shadows on the walls. The whole thing was really sinister. Everyone on set was getting goosebumps… hungry for more.

Is it hard to act scared when, you know, something isn’t real? Is that where imagination comes into play?

I’m a scaredy cat (pun intended) like, I can not go into a Halloween maze without crying. I won’t even bother. I don’t like to be chased. Fear is an easy emotion for me to get into. I just give myself permission to believe- maybe I trick myself into believing that everything is really happening. So, yeah I just have fun jumping into letting my imagination go nuts. I was the little girl in grade school who played Bloody Mary and maybe believed I saw her in the mirror so much that I wasn’t absolutely sure if I saw her or not. Sometimes I freak myself out. Anyone who has worked with me will tell you I’m shaking for a while when I’m done but, I’m laughing too because, I know I’m ridiculous. I’m kind of a dork like that.

Is it hard to ground your performance in such a fun film?

No way. I think that’s the challenge of it. Although in this one, Frazelle wrote totally grounded characters in crazy circumstances but, these are real people dealing with killer cats. That’s why the film will give you nightmares.

Is it important to you to make a film that’s as much about character as it is scares – be it this one or another?

Let me try not to sound like a pretentious actor in this answer but, you asked a really smart question. I think you of course, should always care about your character first. However, if you’re doing a scary movie- I think it’s cool if you talk with your director about where they see the jump and you work with them on the pacing. Meaning…if you’re doing a scene where you’re entering a room and doing the “hello?” maybe you want to change your breath, walk slow and widen your eyes…you and the director become a team.  I really love working with a director when you both are in on the joke. You both say okay let’s scare the shit out of them here…Other times your character can be like Duvall in The Shining she’s just scared out of her mind and you are just playing your character being super terrified and well that’s all that you need to do the director takes care of the rest.

Were you encouraged to improvise?

We did some fun stuff with screaming and chasing and overall cat mayhem. Scott is pretty open like that which is fun to do. In horror there’s always moments where you’re being asked to beg, threaten or lick a butcher knife. Wait… I think I said too much.

What’s the next step for the film?

I’ve heard rumors of some really big names in horror coming on board that I think fans will lose their minds over. I know I did. There’s talk of getting more funding in order to make sure the film can be made with limited CGI and keep with the idea of practical effects.