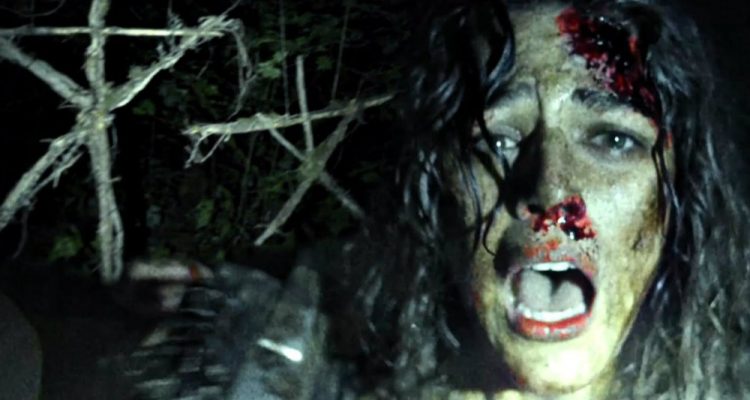 The characters are boring, no good scares and the ending is disappointingly predictable.

Plot: After discovering a video showing what he believes to be his vanished sister Heather, James and a group of friends head to the forest believed to be inhabited by the Blair Witch.

Review: I’m sure you know how this goes: Some young people venture into the woods, get lost, get terrorized by an unseen witch creature, and disappear, never to be seen again. Yeah. You’ve seen it at least once, guys. The Blair Witch Project started an inevitable trend of no-budget POV filmmaking. It was destined to happen. The found footage thing became a subgenre all on its own. Lots of scary found footage movies, not so many others outside of the horror genre. For every Hardcore Henry, there are 20 or so horror found footage pictures. In the past few years, we’ve gotten so many bad ones (like Ghoul and Nightlight, for example), that when a good one comes around (like As Above, So Below) you finally remember why you cared about the gimmick in the first place.

When the filmmakers of the stellar genre films You’re Next and The Guest announced that their next film would be a found footage horror film called The Woods, I was a little disappointed at their choice to go that route, but I was willing to go wherever they took us. When the marketing for the film surprised us with the bombshell that The Woods was actually a sequel to The Blair Witch Project, my heart sank. I’ve never cared for the Blair Witch movies, and I decided that I wouldn’t pay to see Blair Witch in theaters as a statement against the current trend in horror. No matter how much I loved The Guest, I just wasn’t interested in Blair Witch. I already knew what to expect: 45 minutes of getting lost, 20 minutes of terror and blatant ambiguity of the source of the terror, and an unsatisfying ending. It was a foregone conclusion. And when I received the Blu-ray / DVD / Digital HD screener for Blair Witch, my assumptions were correct.

The movie is a letdown on literally every aspect, from the casting, to the boring characters and their slow journey into the woods, and when they finally enter the vortex of the Blair Witch creature, there’s no way out. The final moment of the movie ends exactly the way you expect it will, with no surprise and no answers. Admittedly, seeing this opening night in a full theater with a bunch of scaredy cats might be the only way such a movie can be experienced properly, but I’ll tell you right now that watching it at home isn’t going to do the film any favors. The Blu-ray’s high definition is wrong for the film itself. The movie is supposed to look amateurish, and if it’s blown up on your giant TV, the movie loses impact. The movie had no impact to begin with (save for one short scene where a young woman is crawling in a tight crawlspace under the earth), and so there’s really nothing to recommend here, even on home video. There’s no suspense, there aren’t any good scares, and the hopelessness you’re supposed to feel never kicks in the way it should. Let’s hope the found footage thing soon dies a quiet death and never resurges because from what filmmakers Adam Wingard and Simon Barrett have done is lower the bar and knock themselves back a notch. They should have followed The Guest up with something completely original, and equally as great. Listening to their audio commentary is more interesting than the film itself. There’s also a 6-part documentary on the making of the film on the special features.