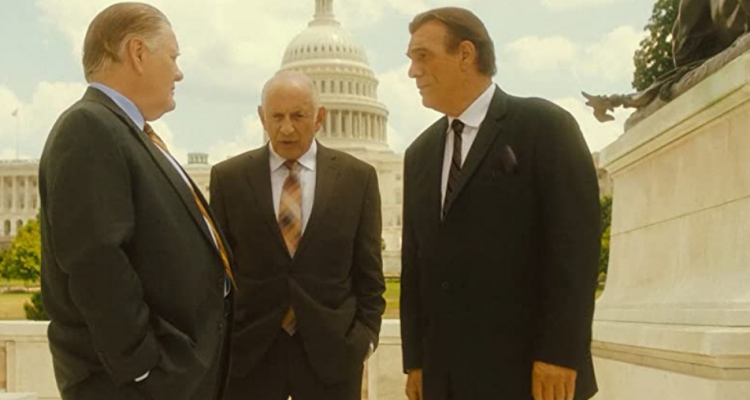 Roe v. Wade is a fascinating look at one of America’s most iconic court cases with a cast at the top of their respective games and a subject matter that will likely be debated for many years to come.

Plot: Dr. Bernard Nathanson and Dr. Mildred Jefferson square off in a national battle in this untold conspiracy that led to the most famous and controversial court case in history.

Review: Roe v. Wade is a movie based on the landmark decision of the U.S. Supreme Court in which the Court ruled that the Constitution of the United States protects a pregnant woman’s liberty to choose to have an abortion without excessive government restriction.

It’s a subject that’s debated to this day and as someone who isn’t American, I won’t pretend to understand the ins and outs of their Judicial system so I’ll just discuss this movie itself directed by Cathy Allyn & Nick Loeb.

It has a fantastic cast featuring the likes of Jon Voight, Corbin Bernsen, Stacey Dash, Jamie Kennedy, Steve Guttenberg, Robert Davi, William Forsythe and many more. Writer/director Nick Loeb plays one of the main protagonists Dr. Bernard Nathanson who helped start the abortion movement and he’s a fascinating character who at first comes across as rather arrogant and unsympathetic but as the film progresses he begins to question himself and when he breaks down at the end it’s the most moving scene of the movie.

Roe v. Wade explores how the movement was essentially started with lies and manipulation of the media by Nathanson and Larry Lader (a possibly career best Jamie Kennedy) and how they are battled by Dr. Mildred Jefferson (Stacey Dash) and the Catholic church. There are discussions from both sides throughout with several key politicians out to help themselves but they have their own issues as members of their families work in Planned Parenthood which complicates their decision making process.

The performances are strong and despite the tough subject matter Roe v. Wade is immediately engaging giving us plenty to think about. It’s not something I know much about so I generally found the film to be enlightening in many ways.

I wouldn’t say it’s a “fun time at the movies” due to the serious subject matter but I feel it’s a film that should be watched at least once as the case itself is endlessly fascinating.

Overall, Roe v. Wade is a challenging picture with a well told story and first rate performances from the entire cast; both Nick Loeb and Jamie Kennedy particularly stand out in their roles but the supporting cast including Stacey Dash are clearly giving their all.