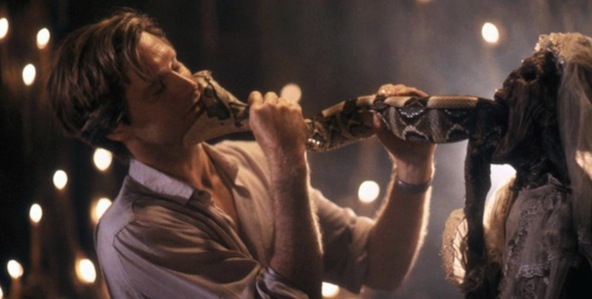 Revisiting The Serpent and the Rainbow (1988)

Plot: In a time of social and political unrest in Haiti, anthropologist Dennis Alan (Bill Pullman) travels to the torn country to study a Voodoo drug used in religious practices to turn victims into living zombies. With the help of a witch doctor (Brent Jennings) and a fellow researcher (Cathy Tyson), Dennis pieces together the deadly mystery. But as Dennis uncovers the secrets behind the mysterious powder, he must evade the Haitian authorities who view his research as a potential threat.

I’ve been wanting to revisit The Serpent and the Rainbow for a long time; I remember liking it when I first watched it, and was intrigued to see if it would hold up or not.

Now that I’ve rewatched it, not only does it hold up but it’s easily one of my favorite films from Wes Craven.

The acting is first rate all around particularly Bill Pullman and our villain Zakes Mokae who is very creepy and sinister.

The story is creative and was very unique for the time; there are some interesting ideas that are on display here that work very well.

The score by Brad Fiedel is impressive and fits the tone and atmosphere of the film very well.

Speaking of atmosphere, Wes Craven is a master at creating that, especially during the dream sequences (though there are not a lot if that’s what you’re worried about there.) This is easily one of his best directed films, especially during those specific sequences which he obviously took from his own film A Nightmare on Elm Street.

I also loved the use of the location that they used, that helps further the suspense of the film throughout.

My only big problem is I wish the villain had a better comeuppance than what we got, what eventually happens could’ve been a lot better, but that’s just me.

Overall, The Serpent & The Rainbow is easily one of my favorite Wes Craven films that has a sympathetic lead, a great villain, plenty of atmosphere throughout, is well directed, and has an interesting story. I’d definitely recommend it if you haven’t seen it!