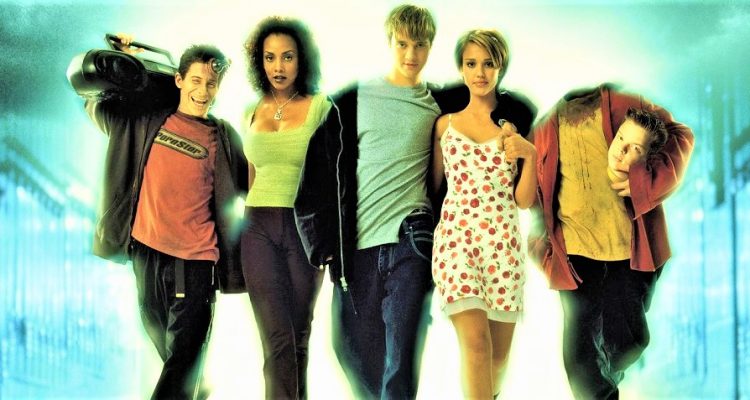 Plot: When slacker teen Anton Tobias (Devon Sawa) has his right hand possessed by a demonic force, he finds that his life gets a lot more interesting. While Anton himself is an amiable guy, his hand proves to be an appendage of death, killing his two best buddies, Pnub (Elden Henson) and Mick (Seth Green), who return to life as wisecracking zombies. In addition to murdering those closest to him, Anton’s evil hand significantly hinders his chances with lovely neighbor Molly (Jessica Alba).

This is one that I’ve been curious about ever since I heard about it years ago; the premise sounded intriguing enough, so figured I’d watch it.

Well, to be honest, I didn’t care for Idle Hands; there are some funny moments, but not enough for me to say I liked it overall.

To me, Both Seth Green and Elden Henson are the standouts. They made the comedy work and were very entertaining. Another one who does a decent job is Vivica A. Fox who tries with the material she’s given.

The makeup effects are quite good especially for the hand, which is very impressive.

I’ll also give credit to the opening scene, which is well done, and has some good tension there.

I enjoyed the soundtrack, especially hearing Rob Zombies Dragula which is one of my favorite songs to listen to every Halloween.

Unfortunately, the rest doesn’t quite work, Devon Sawa is not that great; he tries but he’s not given much to work with and Jessica Alba’s character could’ve been played by any other actress.

Some of the comedy didn’t land for me personally, but that’s just me and it also moves at a slow pace at times, especially in the middle.

Overall, I didn’t really care for Idle Hands, besides Green, Hensen. Fox, the makeup effects, the soundtrack, and the opening scene, this film wasn’t that great, I wish I would’ve loved this one, but I have to be honest, I was disappointed.