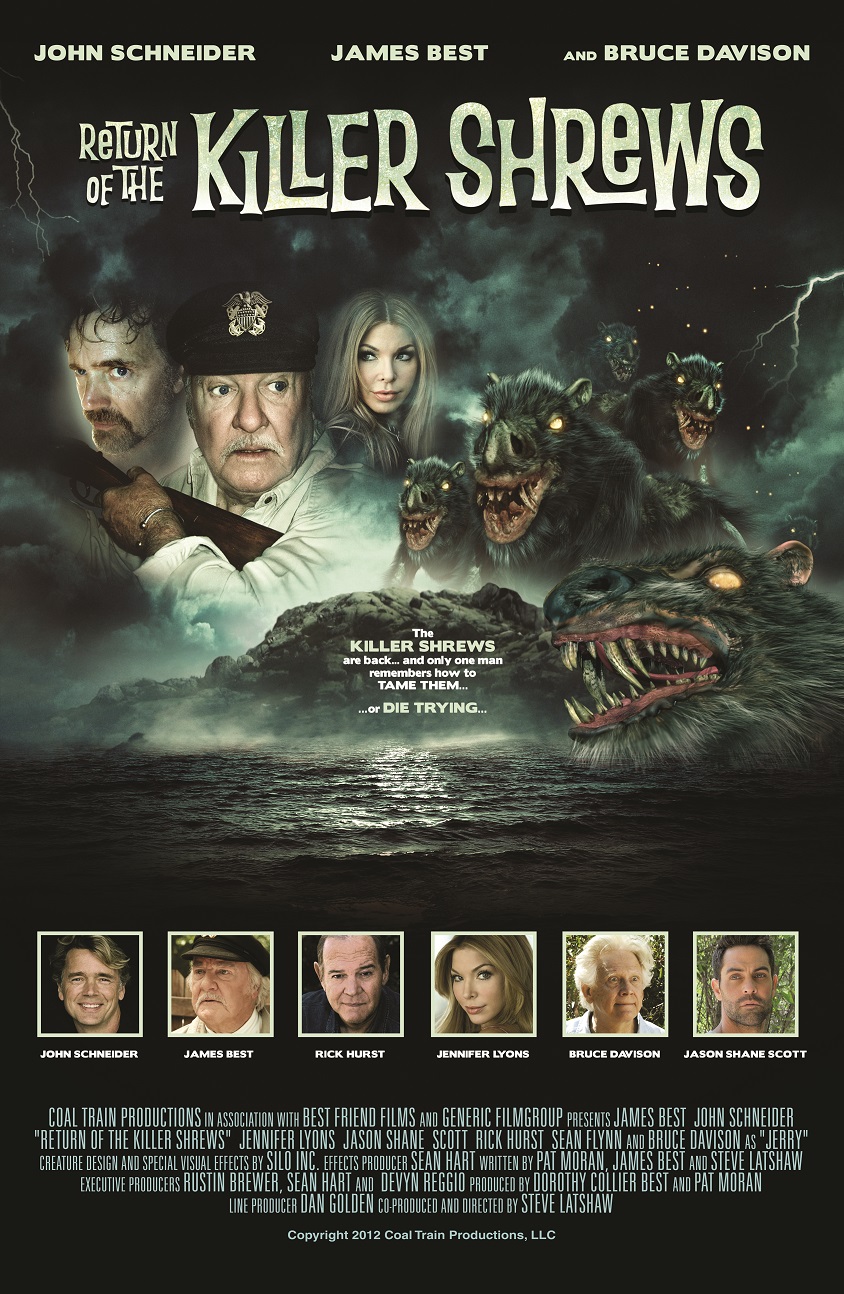 Vintage character actor James Best (The Dukes of Hazzard) revisits a horror/sci-fi title in which he starred over 50 years prior in Return of the Killer Shrews, a 2012 film from B-movie visionary Steve Latshaw (Vampire Trailer Park, Bikini Drive-In) and Coal Train Productions.  The original The Killer Shrews must be seen to be believed: masks are strapped to dogs in order to pass for giant mutant shrews.  Here in the modern sequel, Best reprises his role as Thorne Sherman from the original film, this time taking a group of arrogant showbiz folks and their supplies to a mysterious island, which happens to be populated with large, flesh-eating shrews controlled by an old man with a flute, who also turns out to be a character from the previous film, played by Bruce Davison (X-Men).  Between docking and the inevitable death-by-shrew is the filming of a reality series featuring prima donna actor Johnny Reno (John Schneider, aka Bo Duke from The Dukes of Hazzard), with a clever glimpse into backstage showbiz antics and tension from actors, the pompous director, and all the production crew.  What happens next is your usual post-2010 B-horror fare, with plenty of CGI blood and “another one bites the dust” format from victim to victim, mostly occurring in broad daylight.

The idea of bringing back James Best (who passed away in 2015) after five decades have passed since the original is pretty cool, and Best is indeed the best thing about Return of the Killer Shrews, bringing a rather old school, masculine touch to the predominantly fresh young cast.  While younger audiences will likely not recognize him, he is a prominent name in movie and TV history, with nearly 200 credits to his name.  On the other hand, the mostly young and attractive character roster is rather full in sheer number, the majority given a few lines and mannerisms as to what they’re all about within seconds of introduction, with only a handful not serving as what essentially amounts to a feature creature kill count.  The slight nod and wink to the audience in the display of internal strife amongst the numerous young egos in showbiz is entertaining, albeit brief.  While it’s a fun novelty in creating a sequel to a B-movie from half a century ago, there isn’t much – other than the creatures themselves – that hasn’t been done before, or done better in other, similar films.  If you’ve watched any B-movies at all after 2010, whether on DVD or on channels like Syfy or Chiller, then you’ve seen Return of the Killer Shrews, even if you haven’t specifically seen Return of the Killer Shrews.  This comes from 2012, just a year before 2013’s cult phenomenon Sharknado, and in a post-Sharknado world, it takes a lot for a movie of this type to really resonate with the niche audience.  As it is, this is a pretty “paint-by-numbers” film other than the sequel concept, but it has its place in midnight showings and appealing to the MST3K crowd.  It should be noted that this movie clearly knows its audience and doesn’t stray too far one way or the other in appealing to that audience, so if you’re looking for something on a weekend afternoon or late night specialty theatrical showing, Return of the Killer Shrews does well enough.

Written and directed by Steve Latshaw, with other writing credits by James Best and Pat Moran.  Filmed in and around Los Angeles, CA.

Available on VOD on these formats and dates: 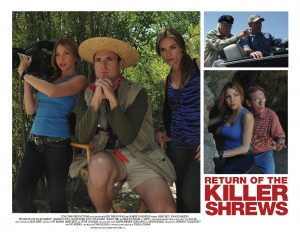 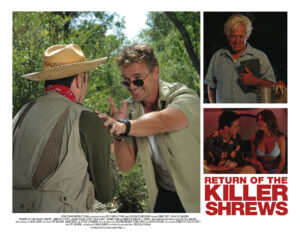