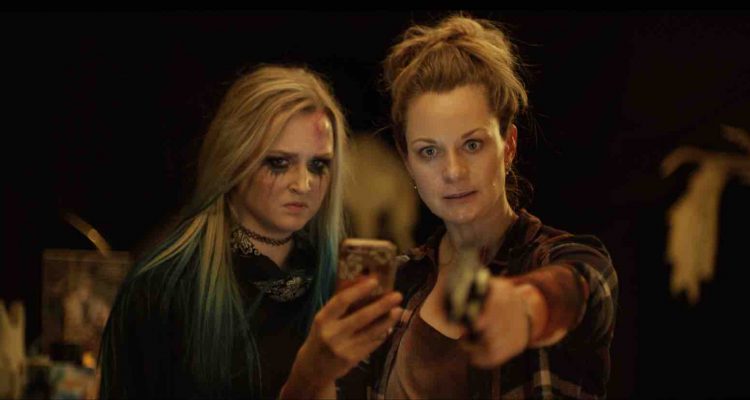 Red Letter Day feels like The Asylum version of The Purge, but it’s too well lit, too clunky, and quite short at 76 minutes to make its mark.

Plot: While adjusting to a new life in a quiet suburban community, a recently divorced mother and her two teens receive mysterious red letters instructing them each to kill or be killed.

Review: A mother and her two teenage kids move into a remarkably nice neighborhood and haven’t even gotten to know the neighbors really well yet. One bright morning everyone in the neighborhood receives a batch of bright red envelopes in the mail, and they’re all in for a big surprise: Inside the envelopes is a letter with explicit instructions to kill someone within a five kilometer radius with details on their addresses and a note saying that the person in the photo in the letter has also received the exact same instructions to kill them. But you see, it’s okay because the other person was chosen based on their social media profile opinions and likes, which are in direct opposition to the other person’s profile and likes. So everyone can rest easy that committing murder on this Red Letter Day is a way of getting rid of someone you don’t like or agree with. The mother and her kids think it’s a joke at first, but when they get a visitor not long after opening their letters, they realize that they’re all in the middle of an anarchist experiment of some kind, which may stretch way beyond their neighborhood. The police are busy with all the chaos, and neighbors are turning against each other just to survive the day. How is anyone going to survive Red Letter Day without getting baptized in blood?

What starts out with a little bit of a spark of pizazz soon spits and sputters as it completely loses its grip on a familiar premise, Red Letter Day feels like The Asylum version of The Purge, but it’s too well lit, too clunky, and quite short at 76 minutes to make its mark. The story and premise could’ve led to some great situations that bordered on satire with all the politics and chilling execution of one of The Purge pictures, but it just doesn’t have the resources – in the script department and in the directing detail by Cameron MacGowan – to completely deliver on its promises. It quickly deteriorates as you watch it, and it’s too bad because this might’ve been a real zinger.

The newly released Blu-ray of Red Letter Day comes with a feature-length audio commentary, a making-of feature, trailers, and more. It’s affordably priced to own.