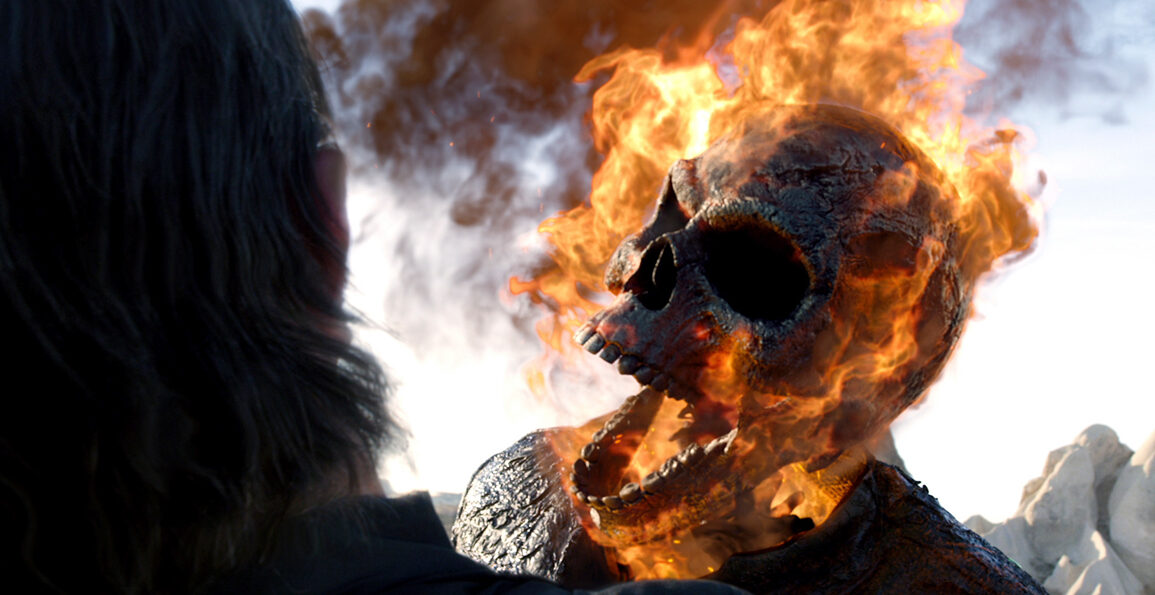 I think we’re all still waiting for a truly great Ghost Rider film; I admittedly enjoyed the Nic Cage movies for the silly fun that they were but I have to say that Todd Farmer and Patrick Lussier’s rejected Treatment sounded like it could have been something special.

Comic Book Movie posted this a while back so it’s old news, but there may be a few of you out there that haven’t seen this yet.

I’ve posted a small snippet of the treatment below which was apparently rejected by the studio because it was too violent, despite the fact that Avi Arad liked it.

GHOST RIDER 2: RIDERS ON THE STORM

Call it a preamble. Likely via Voice Over, we hear Johnny Blaze encapsulate becoming the Ghost Rider… what his purpose is, and the rules of his supernatural alter-ego: Changing in the presence of supernatural evil, or when innocent blood is spilled nearby. Blaze wasn’t the first of his kind but he was the first to spit in the face of the devil. He declined the role of the Devil’s bounty hunter. Rather than terrorize the innocent, Blaze chose instead to use his supernatural evil to slay those already in Satan’s service. Sound easy? Sound like hero’s work? Did to Blaze too… but walking with evil takes its toll… and sooner or later it gets hard to tell the difference from the evil out there and the evil inside your own soul…

MEET JOHNNY BLAZE… drunk and staggering… a shadow of what he once was…tormented by his years of being Ghost Rider. He stares at himself in the bathroom mirror of a shitty bar. He holds up his hand… flames lick out from the fingers as he presses it on the reflective glass.

It heats, distorts, cracks – Blaze’s reflection fragments — pieces of Johnny, pieces of Ghost Rider. Finally he SMASHES his face into the mirror. Staggers back, drops to the filthy floor. Door swings open – Meet DEACON GRAY (think Sean Bean), once entered the priesthood but slugged a Bishop for eying an altar boy.

He’s rugged, righteous and vicious with scars from brow to jawbone. He slaps Blaze across the face. Coffee. Lots of it. Deacon forces Blaze to drink it. Sobering him some. “You good enough to ride?” asks Deacon. Blaze’s Harley (the Easy Rider bike from the first film) kicks to life. It too is a mess. No longer clean or pristine, it’s amazing it runs at all.

It’s as tarnished as Blaze is himself. Deacon glides up next to him on his own bike. The two take off. American highway through the Rockies. Mountainous terrain, tunnels and open road. Blaze finally slows…Deacon next to him. We intercut their conversation.

Deacon: “Blaze, you turned your back on everything you had goin for you. Shit, you had achieved the dream. And now you can barely keep your head on straight.”

Deacon: “This thing inside you… if it ain’t gonna leave on its own then you gotta make peace with it. Cause you’re letting it kill you.”

Blaze: “I’d be okay with it killin’ me. Hell, I’d welcome it. But it doesn’t want me dead. It just wants out. So I gotta keep the road movin’ beneath me…”

Deacon: “Yeah? That never seems to stop you from turnin.’ You look on it like it’s hell itself… but think of the evil that you smite… Blaze, that’s a good thing.”

Blaze: “In the beginning. Thought if I was pure of heart, true to myself, that I could control it. But now… seems like the worst kind of nightmare keeps finding me. Like I’m not a hunter of evil…I’m a goddamn magnet for it. I swear to you brother, if we come to a crossroads and you want a peaceful day, just don’t follow me. Because my path’s gonna be full of pain and suffering. Makes me think there’s a reason. Like my jumping ship has thrown the balance out of whack. Like I’m just supposed to give in.”

Deacon: “To what? The Dark side? Blaze. You do that. And I will personally send you back to hell myself. That is a promise.”

Johnny and Deacon lock eyes. Then Johnny extends his hand. “I’ll take you at your word. And hold you to it.” Deacon shakes, the deal sealed. Blaze and Deacon race through the mountainous road. Head through one tunnel, then emerge from another. Both screech their bikes to a halt.