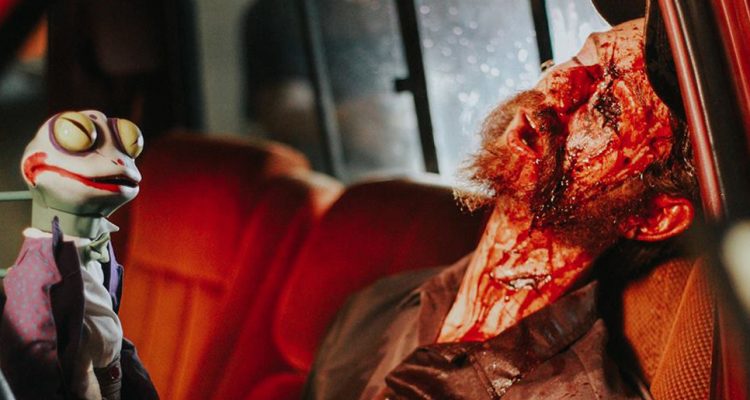 A real kick in the nuts to Full Moon’s long dormant and dry Puppet Master series, The Littlest Reich is a revitalizing, sexy, and ravaging gorefest starring a bunch of practically rendered killer toys.

Plot: All hell breaks loose when a strange force animates the puppets up for auction at a convention, setting them on a bloody killing spree that’s motivated by an evil as old as time.

Review: Sad sack Edgar (Thomas Lennon) is just divorced and moves back to his hometown. He finds one of his dead brother’s old toys – an evil looking puppet – and decides to unload it at a convention a few towns over. The convention is celebrating an infamous toymaker named Toulon, a Nazi who created a line of murderous puppets that may or may not have come to life at various times throughout history to commit atrocious murders in service of their master. Edgar isn’t alone: his has his buddy from the comic shop where he works, and he has his new girlfriend, a very game young woman named Ashley (Jenny Pellicer), who knows nothing of the Toulon murders but is along for the ride. While at the convention (which is being hosted at a fancy hotel), the puppets everyone has brought to sell, trade, or show off, come to life once again to create a bloody havoc, racking up a massive, gory body count the likes of which the convention goers have never seen or imagined. Edgar and his mates – and several other survivors – must make it alive to morning, or succumb to Toulon’s dark bidding.

A real kick in the nuts to Full Moon’s long dormant and dry Puppet Master series, The Littlest Reich is a revitalizing, sexy, and ravaging gorefest starring a bunch of practically rendered killer toys. With one outrageous kill scene after another, this movie throws away all political correctness to the gutter and just goes for it in a no-holds-barred slasher basher. With a fun script by novelist turned filmmaker S. Craig Zahler (Bone Tomahawk, Brawl in Cell Block 99) and vibrant directing by Tommy Wiklund and Sonny Laguna, this horror movie might be too much for a casual horror fan to handle, but any seasoned fan will feel right at home.

RLJE is releasing Puppet Master: The Littlest Reich onto DVD, Blu-ray, and a 4K Ultra HD + blu ray combo pack on September 25th. Special features include “The Cast of Puppet Master,” “Puppets: From Concept to Screen,” and much more.