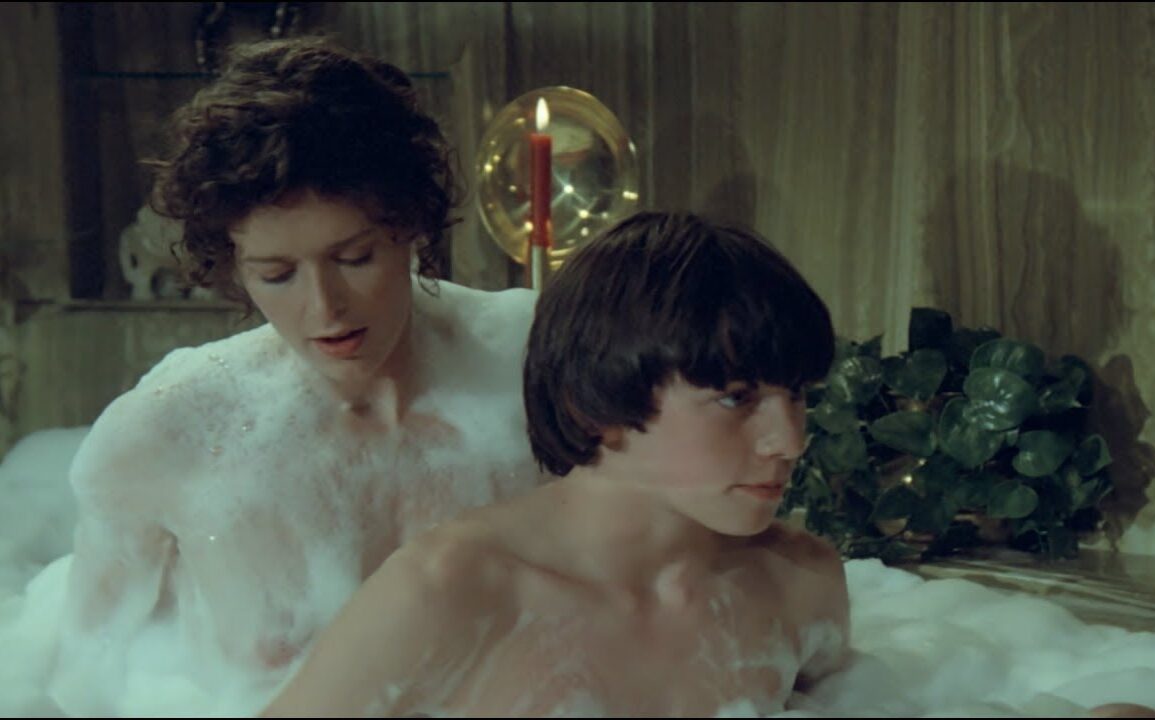 Remastered nicely in widescreen format however,  Kristel’s role is rather cliched.

Plot: An immigrant housemaid seduces a 15-year-old boy and later fakes her own death as part of his chauffeur’s blackmail plot. Troubles arise when the two start to fall in love.

Review: Phillip Fillmore (played by Eric Brown) is the luckiest kid on Earth. He doesn’t know it yet, but his personal driver (played by Howard Hessman) has orchestrated a scheme to have him deflowered by the newly hired housekeeper – Miss Mallow (played by sexpot Sylvia Kristel from the Emmanuelle movies) – and then stage her death to make it look like Philly killed her on accident, and then extort money from him. While Philly’s rich dad is away on business for a week, Miss Mallow ingratiates herself into Philly’s small world and takes advantage of his raging hormones. She strips for him (he freaks out and is embarrassed in a difficult, but believable scene), and in days she takes his virginity and makes him believe that she’s his girlfriend, though she’s at least ten years older than he is. Over the next few days, Philly gets it on with Miss Mallow, and he gets his education in love, sex, and everything else that matters, but when the con is on, Philly’s world crashes and he scrambles to come up with ten grand to pay off the phony extortionists. When Miss Mallow realizes how cruel she’s been to her sweet natured mark, she relents and steps out behind the curtain to help him get out of his current mess.

At turns shocking and genteel, Private Lessons gets major points for casting Eric Brown (later in the similar film They’re Playing With Fire, which co-starred Sybil Danning), who looks like he’s underage and still has that kid innocence to him. His sex scenes with the usually nude Kristel are “cute” and manage to avoid being gross and ultra exploitative, but even as they’re presented they’re pretty awesome. Kristel always seems to be very much aware of her sex star status, so her role is a little clichéd in the way that Caren Kaye’s role wasn’t in the very similar (but better) film My Tutor. Some hit songs by Rod Stewart, Eric Clapton, and John Cougar Mellencamp are predominant on the soundtrack. From director Alan Myerson, who made Steelyard Blues. More than a decade later, an in-name only sequel called Private Lessons: Another Story was made. Private Lessons II was also made in 1993 with Joanna Pacula, but it has nothing to do with this film.

Cinema Epoch recently released a definitive Blu-ray edition of Private Lessons, and it’s a noted upgrade from any previous DVD releases namely because this is the first time the film has been made available in the widescreen format. It has been remastered in 4K from the original camera negative, and it includes some choice special features, including two audio commentaries, and TV spots. This release should make its way into the libraries of tried and true collectors of teen sex comedies on Blu-ray.