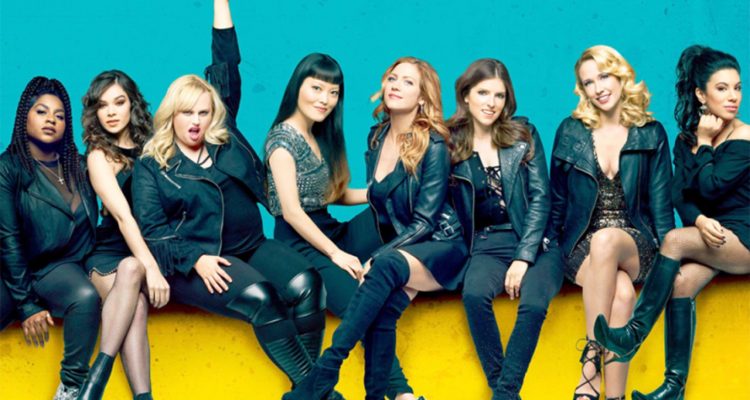 Pitch Perfect is a fitting end to an entertaining trilogy; it’s not without its issues but fans of the series will lap it up.

Plot: After the highs of winning the world championships, the Bellas find themselves split apart and discovering there aren’t job prospects for making music with your mouth. But when they get the chance to reunite for an overseas USO tour, this group of awesome nerds will come together to make some music, and some questionable decisions, one last time.

Review: The Barden Bella’s are back in the final chapter of the Pitch Perfect franchise, and they’re going out with a bang, literally.

Since the original movie in 2011, I became obsessed with this all-female acapella group. It was fresh, and original. The second movie did lose its footing a bit, but Pitch Perfect 3 really does tie everything together, which bookends this aca-awesome franchise.

Pitch Perfect 3 is delightful. I laughed, and even shed a tear at the end knowing this is the final chapter. The movie really jam-packs a lot of songs into 1 hour and 34 minutes, but I thoroughly enjoyed it. The film’s rendition of Britney Spears “Toxic” is worth the price of admission alone, and they sing it twice. BONUS!

Now the movie did feel a bit predictable, there were really no surprises. The plot and writing were very linear, so you could predict things from a mile away.  Also, I felt like the movie was really trying to shove DJ Khalid down our throats. Literally every other minute had a reference to DJ Khalid – whom is in the movie, but it just felt forced.  Also, the movie tries to setup a rivalry between the Bella’s and a new group, Evermoist, whom is led by Ruby Rose. The rivalry seemed to just fizzle out towards the end due to other plotlines within the film overpowering the supposed rivalry.

Rebel Wilson is still the standout of the movie. Her character, Fat Amy, still brings that witty, dry humor which will have the audience laughing. Her character gets explored more, but unfortunately the storyline does fall flat. This plot takes over the last act of the movie, which for me, didn’t work – it felt a bit over the top. John Lithgow makes an appearance in this movie…I wish he didn’t though. His accent was just horrid.

Pitch Perfect 3 continues it’s running gags from the first 2 films, which were fun and humorous – even poking fun of themselves in the process. I won’t go into detail, but we finally get to hear some people talk, which added a lot of laughter.

Overall, Pitch Perfect 3 is a fun time. The movie is predictable and very DJ Khalid heavy, but it’s a pitch perfect ending to a fun, musical franchise.