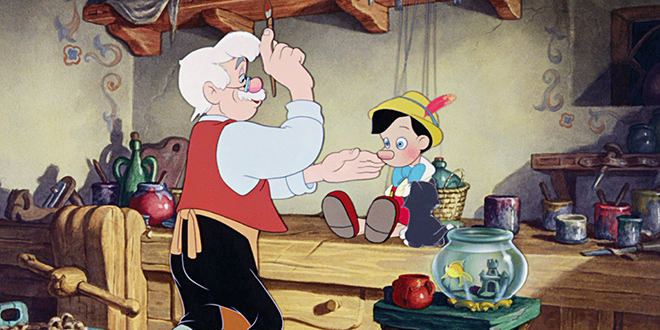 The film is a classic and the Blu-ray is packed with special features.

Plot: A living puppet, with the help of a cricket as his conscience, must prove himself worthy to become a real boy.

Review: The story is a classic fable: A lonely tinker named Geppetto wishes upon a star that his little wood puppet Pinocchio would become a real boy, and a fairy comes down from the heavens and grants his wish. But even as a living creature, Pinocchio isn’t complete. He is still made of wood and his innocence is easily corrupted as he’s taken advantage of by almost everyone he meets. He’s stolen away by a couple of street shysters who sell him into slavery to a cruel mountebank puppeteer named Stromboli, and it is there that Pinocchio learns his first real hard lesson. People who seem nice aren’t necessarily genuine, and if it weren’t for his “conscience” – a tiny cricket named Jiminy – he would have been lost most surely forever to a life of servitude. When he and the cricket escape, they end up in another major predicament: Pinocchio is swindled yet again and taken to Pleasure Island, a purgatory for wayward boys who live it up … until they’re turned into donkeys! Pinocchio and Jiminy barely make it out of that hellhole, and they make their way back home, only to discover that Geppetto is long gone, searching for Pinocchio, and presumably lost at sea. But it’s much worse than that: Geppetto is trapped inside the belly of the beast whale Monstro, and only Pinocchio can save him, putting his true mettle of selflessness to the test.

One of the all-time great Disney animated classics, Pinocchio (the second Disney feature film) is back in circulation with a brand new Blu-ray / DVD / Digital HD combo pack. The highlighted special features on the Blu-ray include “The Pinocchio Project: When You Wish Upon a Star,” which is a music feature of today’s pop stars creating their own take on the song, “Walt’s Story meetings: Pleasure Island,” an artwork montage, and “In Walt’s Words: Pinocchio,” which is a selection of interviews with Disney himself. There are many more features on the disc as well. As these Disney titles tend to go back into the vault at varying stages, it’s always a safe bet to add them to your hardcopy film library for your family as time goes on.