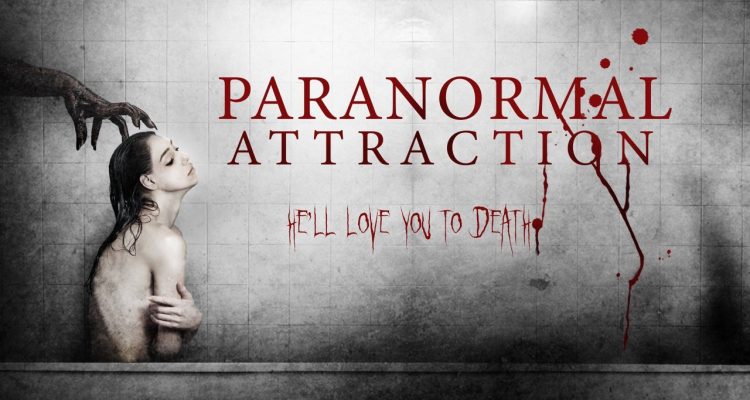 A young woman is beset by the demonically-infused spirit of a homicidal stalker. Low-budget indie horror film treads over familiar territory but adds a fresh LGBTQ angle.

PLOT: Sara Myer (Brooklyn Haley), is a young woman who is hired to do an estate clear-out of a home where the previous tenants have mysteriously gone missing. As she packs up their belongings, she begins to experience strange occurrences and feels a presence in the house. She also has a series of visions. Sara tries to find out the history of the house from the real estate agent, Melanie (Jennifer Nangle), who hired her, but is told that the previous owner, Natalie, died several years before, during accidental sex play with her boyfriend. Sara’s best friend, Kelly (Eden Shea Beck), does some digging and shares with Sara that it was a murder that actually occurred in the house. The victim was Natalie Walker (Ashley Vetere), killed by a murderous stalker by the name of James McAllister (Robert Downs), who was then killed by the police. Sara has her own history with a violent stalker- her ex-boyfriend, Jeff (Darell M. Davis), against whom she has a restraining order. Sara’s travails gain the interest of a local police officer, Evelyn Bennett (Nicole Cinaglia), and the two begin a tentative relationship. As more supernatural events occur, Kelly posits the theory that McCallister’s spirit is infused with an Incubus – a male demon that subsists on sexual energy. Sara, Evelyn, Kelly and her boyfriend, Nick (Hunter Johnson), try to exorcise the Incubus from the residence, but the malevolent demon may already be too powerful to remove.

REVIEW: Paranormal Attraction is a 2020 independently produced horror film directed by Alex T. Hwang, who also supplied the story. The film was written by Richard J. Aguirre (Lilith). The film stars Brooklyn Haley (Bearry, The Crossing),  Nicole Cinaglia (Death House), Eden Shea Brook (My BFF Satan), Hunter Johnson (Verotika), Robert Downs (Prey, In Cold Blood), and Jennifer Nangle (Desert Moon). Despite the low-budget, the director and writer make the most of what they’ve got. Most of the film’s interiors are shot in one location at a Southern California home (Cinematography by Cesar Withingham). Some of the performances are unpolished, but good enough to carry the film across the finish line. I did become invested in the plight of the characters, and I did buy into the relationship between Sara and Evelyn, which helps anchor the film considerably. Darell M.Davis is unapologetically nasty as Sara’s stalker ex-boyfriend, Jeff. The score by Zachary Walker gives the film the right amount of subtle dread and goes full-on bombastic in the film’s climactic scenes.

Paranormal Attraction has cinematic spectral-sex-stalker antecedents in such films as Incubus (1981), The Entity (1982), and 100 Feet (2008), among others. Fallen (1998) is another film that features a body-hopping demon.  There really is very little gore, the violence is sparse, but what is there is spotted for maximum effect. The film is not particularly scary, but as a jaded horror film fan, I give the director a thumbs up for at least getting me with a good jump scare early on. A few minor issues I had: Sara’s ditzy friend, Kelly, seems to know more about performing an exorcism than one would expect (I guess Father Merrin wasn’t available that week), and once weird, unexplained stuff starts to happen, nobody seems to want to leave the premises and get the heck out, despite the threat. That said, the script was on-point, and the execution was not bad for a low-budget indie horror film.

Paranormal Attraction will premiere as an official selection at the AOF (Action On Film) Festival, September 5th, in Las Vegas.