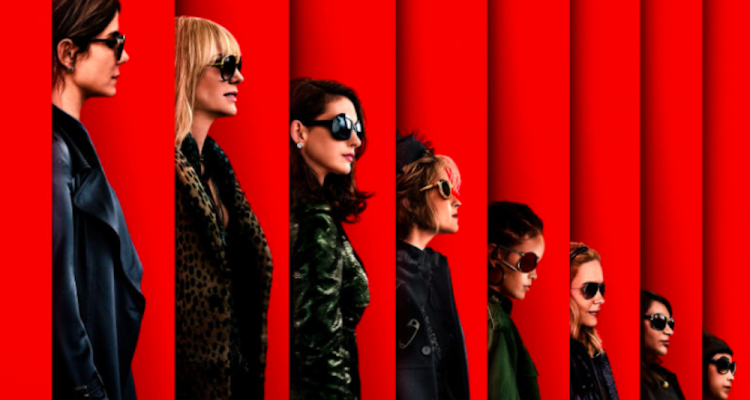 Ocean’s 8 is not without its moments and the cast play their parts well but the way some scenes go on too long and lack of stakes make it a movie I wouldn’t rush to see again. Wait for Netflix.

Plot: Five years, eight months, 12 days and counting — that’s how long Debbie Ocean has been devising the biggest heist of her life. She knows what it’s going to take — a team of the best people in the field, starting with her partner-in-crime Lou Miller. Together, they recruit a crew of specialists, including jeweler Amita, street con Constance, suburban mom Tammy, hacker Nine Ball, and fashion designer Rose. Their target — a necklace that’s worth more than $150 million.

Review: I initially started writing this review on Thursday night after seeing Ocean’s 8, but I had to stop and re-watch the movie to really deconstruct it. Sadly, watching it a second time made me find more things to pick at. Ocean’s 8 isn’t a remake, but spin-off and sequel to the early 2000’s Ocean’s saga. The movie stars Sandra Bullock as Debbie Ocean, sister to Daniel Ocean from the original movies. Debbie and her friend Lou (Cate Blanchett) assemble an all female team to steal a precious diamond necklace during the Met Gala.

The cast does a great job to compel the viewers throughout the heist, but the definite standouts were Helena Bonham Carter, Rihanna, and Anne Hathaway. They had some of the best and funniest scenes, and really elevated the movie. The film is littered with cameos, it’s something that really makes the movie fun. I won’t spoil it, it’s something you’ll want to enjoy for yourself.

Sadly the movie does have a few flaws, which really brings it down. The first being the heist itself. The actual execution of the heist was done really well, but the actual item they’re going after isn’t really that interesting. The other Ocean’s movies had bigger stakes, bigger heists, yet this heist was just for a diamond necklace. It’s been done thousands of times in other films, so it was a bit lackluster. Again, the execution was fun to watch, but I wish the heist was a lot more grand in scale. Another flaw in this film was technology. It just seemed like every time the crew encountered a hiccup, it was easily fixed within seconds by technology. Something goes wrong, no worries Rihanna can click a button and solve the issue. It just felt too simple, and made the heist feel too easy.

Another issue I had was the directing and cinematography. I understand taking cues from the previous movies, but I felt like the director, Gary Ross, was trying to copy what Steven Soderbergh did in his Ocean’s movies. There were moments in the film where I felt they lingered on a shot way too long, and that it didn’t really add anything of value to the movie. I wish Gary Ross made his own version of the movie opposed to trying to copy elements of the previous saga of films. Lastly, something that was said right in the beginning of the film made me pretty upset, and I felt there was no resolution. If you’re going to do something that bold, explain it. Just don’t have that plot thread hanging their non-resolved.

Overall, I’m happy with Ocean’s 8, but the flaws really do weigh down the film. If they do an Ocean’s 9 I really hope they make the heist larger in scale like the previous Ocean’s saga.