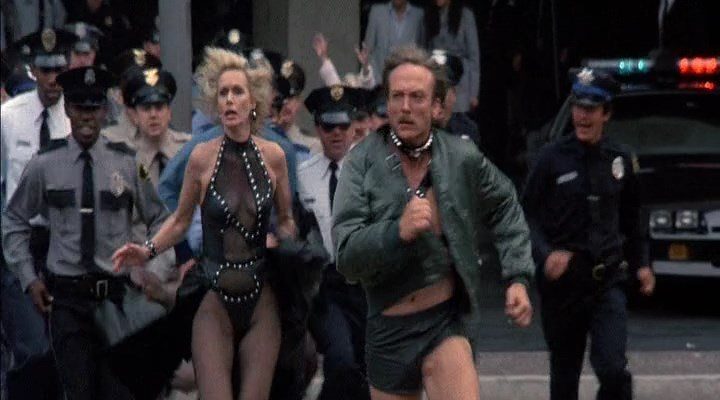 Goofy but funny comedy and fantastic music; the Blu-ray is a must-have too.

Plot: The goofy students of a remedial drivers education class find themselves butting heads with their abusive police instructors.

Review: Bucking for a promotion, hardass Deputy Halik (James Keach, with a twitch) pulls the wrong guy over: happy-go-lucky smart aleck Dana (John Murray, Bill’s brother, who never had another starring role), who takes the ticket with a smile. Little does Halik realize that Dana will be the catalyst for his eventual destruction. Dana is ordered to attend traffic school while his company truck is impounded, and when he shows up to traffic school with a bunch of lovable misfits, it’s Halik who is their instructor. Halik, who was demoted as a result of his harassment of Dana, has it out for Dana and the rest of the students, who he sees as miscreants. When Dana and some other students figure out that the county judge (played by Sally Kellerman) is in cahoots with Halik to ensure that all the students fail their course in order to have their impounded vehicles forfeit to the county (spelling a pretty penny at the end of the quarter), Dana and his classmates (who include the impossibly cute Jennifer Tilly, the hilarious Wendie Jo Sperber, and Fred Willard, amongst others) must come up with a plan to dupe Halik and the judge so that they can get their cars back and a new license to drive!

Moving Violations is the ultimate stay at home sick day movie. I grew up with this film in my library (taped from HBO in 1987), and I’ve always had a real soft spot for it. The comedy is goofy, but it’s still really funny, and it’s a shame John Murray didn’t continue making films. He had something to offer, and it’s on display here in this fun film. It’s a little sexy, but not too gratuitous, and it earns its PG-13 rating. The soundtrack is especially endearing to kids of the ’80s with some radio hits and a memorable theme song that I used to play over and over. From director Neil Israel (the writer of Bachelor Party and Police Academy).

Kino Lorber just released a great looking Blu-ray of Moving Violations that exceeds the previous home video release from Anchor Bay about a decade ago. The transfer looks and sounds great, and there’s an audio commentary by director Israel and the original trailer is also included. If you’ve never seen or heard of this, now is the perfect time to grab a copy of it and watch what I consider to be one of the most underrated comedies of 1985.