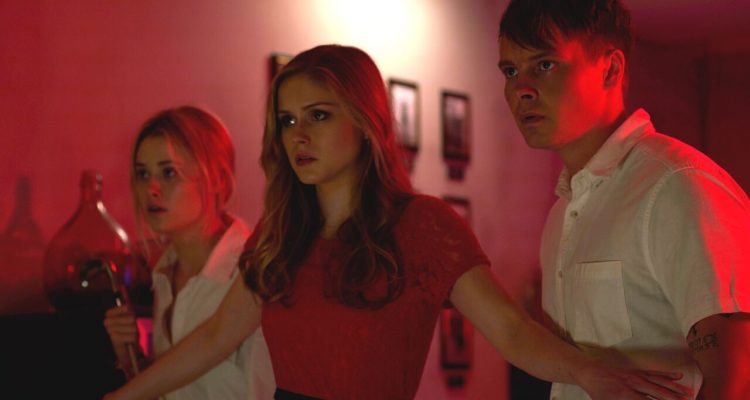 When the movie should have hunkered down and gotten badass, it forgets that it’s set in a more-or-less “real world” and becomes a laughably moronic goof right up till the last shot of the movie that completely undoes the lengths to which the movie worked to get there.

Review: The scenario is prime for farce or full-on mania: Three two-bit suburban thieves (played by Sam Strike, Virginia Gardner, and Brandon Michael Hall) need a good score, and so they pose as waiters for a swanky client in Malibu, hoping to steal some loot during the dinner party they’re supposed to be working at. The clients are ultra rich: The wife (Robin Tunney) seems to be sleepwalking through life, while the chilly husband (Julian McMahon) treats the “waiters” with disdain. The couple’s son acts like a sociopath, and their daughter (Erin Moriarty) is an emotionless beauty. Once the guests start arriving, it is immediately clear that the party is not what is seems to be. In fact, one of the guests (Lance Reddick) presides over the event like a cult leader, complete with a beautiful (and alarmingly young) captive, obviously there against her will. As the three thieves skitter about the house, trying to crack the security system, the party is soon revealed to be a support group for serial killers, and when the host’s son breaks his fast from killing (by brutally murdering one of the three thieves), all hell breaks loose in the mansion when the remaining two thieves must try to escape the house and the homicidal guests, who taste blood in the air.

Writer / director Chris von Hoffmann, who previously made the horrendous apocalyptic cannibal action movie Drifter returns with this somewhat promising offering, which at the very least has an intriguing hook that blends stuff like The Purge, American Psycho, and The Strangers and gives the home invasion movie a new twist. That said, the movie and Hoffmann’s loose grip on the material and concept completely unravels and lets loose in a cavalcade of gonzo violence and desperately feeble attempts at humor. When the movie should have hunkered down and gotten badass, it forgets that it’s set in a more-or-less “real world” and becomes a laughably moronic goof right up till the last shot of the movie that completely undoes the lengths to which the movie worked to get there. Hoffmann’s craft is dull as a butter knife and should he continue making movies in this vein (which appears to be a given after two similar-type pictures in a row), he should restrain himself and study mood, tension, and character in the work of the masters (try Hitchcock, pal), and retool his approach to the sordid material he’s attracted to.

Monster Party was recently released on DVD from RLJE.