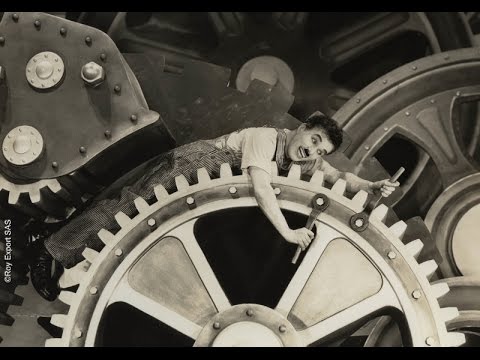 Plot: A factory worker and his homeless companion struggle to survive after both the great depression and modern industrialization.

Review: Before Abbott and Costello, Lewis and Martin, and Ferrell and Rogen, there was Charlie Chaplin. Hailed as one of the greatest comedians of his (or really any) generation, Chaplin was known for playing hard-on-their-luck tramp characters in the silent era of film. While there are doubtlessly comedians who were perceived to be funnier or wittier, no one quite combined the skill, the social commentary, and the outright banality of a Charlie Chaplin film.  Modern Times is considered one of his best films. Selected for preservation by the Library of Congress, it’s a fast, amusing and ultimately satisfying look at a pair of characters who are out-of-touch with the society in which they live.

Chaplin, of course, is the star of the picture, and his tramp character is on point, as always. While I didn’t find any true moments made me laugh so hard that tears squirted from my eyes, there were quite a few funny sequences, mostly involved with Chaplin’s interaction with “modern” machinery. If I had to pick one scene that I think was the best, it would have to be the one where he serves as the guinea pig for a “feeding” machine, which of course, malfunctions to hilarious extremes.  While it’s a ridiculous sequence, it also stands as a statement to Chaplin’s opinion of large corporations, which see no problem in demeaning their staff, if it saves money. Likewise, when the machine malfunctions, the owner of the factory where Chaplin is employed isn’t concerned about the well-being of his distressed employee; no, he merely states that the machine isn’t practical and scurries off.

Then, there’s Paulette Goddard, who plays Chaplin’s partner through much of the film. Orphaned and living on the street, her innocence is a perfect companion to Chaplin, who seems himself an innocent amongst sharks. Their relationship appears genuine and borne out of a general affection they share with one another, and you can’t help but root for them to both to succeed. I won’t spoil what happens if you haven’t happened to see this movie, but let’s just say that through the trials and tribulations they endure, their relationship is one of the few things that last.

Of course, it’s impossible to talk about a Chaplin film without talking about the aspect that involves sound. Even though movies had evolved to this point that the movie could have been a talkie, and Chaplin also considered making this his first sound picture, but ultimately, he decided to make a hybrid movie, with most aspects of the silent era (including exaggerated sound effects and swooping orchestras) accompanied with rare occurrences of actual spoken dialogue – and most interestingly enough, that mostly occurs near the beginning, when we are in the factory and the company executive gives orders to an underling to pull a lever in a giant machine.  It’s an interesting idea of where to place sound for sure, as Chaplin sort of ties in the concept of sound pictures with the future.

Overall, I recommend checking out this film. Chaplin was truly a master of his craft and has a deft ability to combine banal laughs with thought-provoking ideas. This was the last film that Chaplin shot with his beloved tramp character, and it’s a fitting and satisfying conclusion to a legendary role.