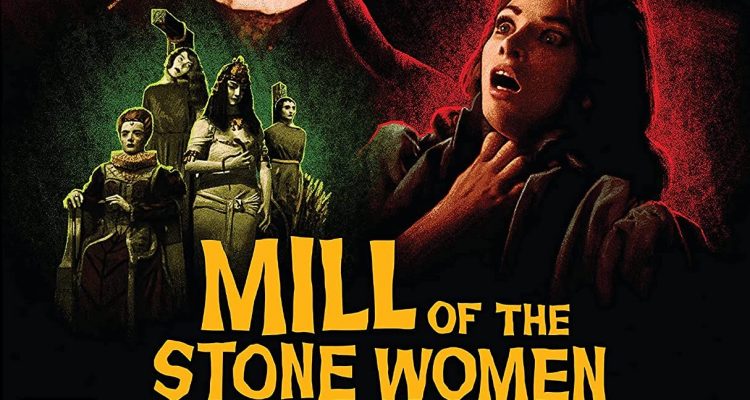 A bridge between Hammer-style horror and Italian giallo, which had yet to become a genre, the Italian-made Mill of the Stone Women is a handsome production in vivid color with assured direction by filmmaker Giorgio Ferroni.

An art student arrives at the abode of a reclusive sculptor to write an article about him, and after spending some time in the strange windmill where he lives, he becomes privy to the artist’s macabre practices … and meets his ghostly, but beautiful daughter who falls desperately in love with him.

A barge delivers an art student named Hans (Pierre Brice) to a small village, where he hopes to research and write about a reclusive, but famous sculptor named Professor Wahl (Hermert Bohme), whose strange, macabre work is renown for its graphic displays and depictions of violence towards women. Hans arrives at the gothic windmill where Wahl lives, and while he’s invited in by Wahl, it is clear that Wahl sees Hans as an annoyance and an unwelcome distraction. Wahl has been working on his famous carousel – a grisly menagerie of sculpted mannequins – that depicts various women is the throes of death, torture, or in extreme anguish, and it is this carousel that has given Wahl a reputation around the world. Hans is only allowed to stay at the windmill for a few hours every day for the next week to do his research, but while there he is approached by Wahl’s gorgeous, but severely disturbed daughter Elfi (Scilla Gabel), who immediately focuses all her attention and energy on Hans and falls desperately, madly, and insanely in love with him, despite his protestations. This infatuation leads to her sudden and shocking death, and while Hans is not to blame, he is stunned when Wahl manages to resurrect her using his ghoulish and perhaps supernatural methods of turning his mannequins into living, breathing, and feeling creatures, or perhaps the mannequins were once human, but what is certain is that Hans finds himself at the center of a nightmare that he may not be able to escape in time before the mad Professor Wahl goes over the edge with his gory art.

A bridge between Hammer-style horror and Italian giallo, which had yet to become a genre, the Italian-made Mill of the Stone Women is a handsome production in vivid color with assured direction by filmmaker Giorgio Ferroni. It feels like the waypoint right in the middle of two worlds of horror filmmaking, and while it feels more like a Hammer-type of film, it certainly reaches out into the darkness and finds a grasp on what would become a standard for the Italian film industry a short while later with filmmakers like Mario Bava and Dario Argento at the forefront of the pack with their colorful styles. Fans of the genre should check this one out, and while it’s not necessarily a classic, it’s a strong entry in a creepy genre that was beginning to outclass everything that had come before it.