Old fashioned in a way that proves Hollywood might still be interested in making romantic comedies after all, Marry Me is as predictable as you’d expect with almost no surprises at all, but it still works, and so what’s to complain about?

A pop star is betrayed on her wedding night, so at her big concert, she marries a stranger on a whim to spite him, but ends up falling in love with the stranger, complicating both of their lives.

Kat Valdez (Jennifer Lopez at 53 playing “north of 35”) is the biggest pop star in the world, and she’s got a massive concert with her fiancé Bastian (Maluma), also a pop star. The big finale of the show is supposed to conclude with their duet “Marry Me,” their new hit single, and to top it off, they’re going to be married in front of millions of people, but at the last second Kat finds out that Bastian has been cheating on her, and so she dumps him and marries a complete stranger in the crowd, a guy she chooses at random, who happens to be a nebbish math teacher named Charlie (Owen Wilson, looking a little weird), who went to the show on a whim to make his friend Parker (Sarah Silverman) happy. Charlie is a divorced, single dad, whose daughter Lou (Chloe Coleman) has stage fright, and for the most part Charlie is pretty okay with his life, but all of a sudden the spotlight is turned on him when he says “okay” to Kat in the wedding ceremony that the whole world watches. Instead of treating it like the joke that it should be, Kat decides to stay married to Charlie to try something different and unexpected (and not what her handlers and everyone else expects), and much to hers and Charlie’s surprise, they end up falling in love with each other, despite the vast differences of their lives. But after a spell, Charlie realizes that it will never work between them, and he calls it quits, but being apart proves too much for them to bear, but it’s Kat’s move to either chase her man down … or move on without him.

Old fashioned in a way that proves Hollywood might still be interested in making romantic comedies after all, Marry Me is as predictable as you’d expect with almost no surprises at all, but it still works, and so what’s to complain about? The mismatched pairing of Wilson and Lopez is a little weird, but she jumps into the role with gusto, while he sort of sleepwalks through it. Some of the songs are catchy (sue me), and there’s still some appeal to these sorts of mushy comedies. I didn’t love it, but I had no trouble sitting through it with my wife, which is exactly why the film is recommended. From director Kat Coiro.

Universal just released a Blu-ray / DVD / Digital Code combo pack of Marry Me, and it comes with quite a few special features, including a gag reel, deleted scenes, a making-of feature, a commentary, several music-spotlight features, and more. 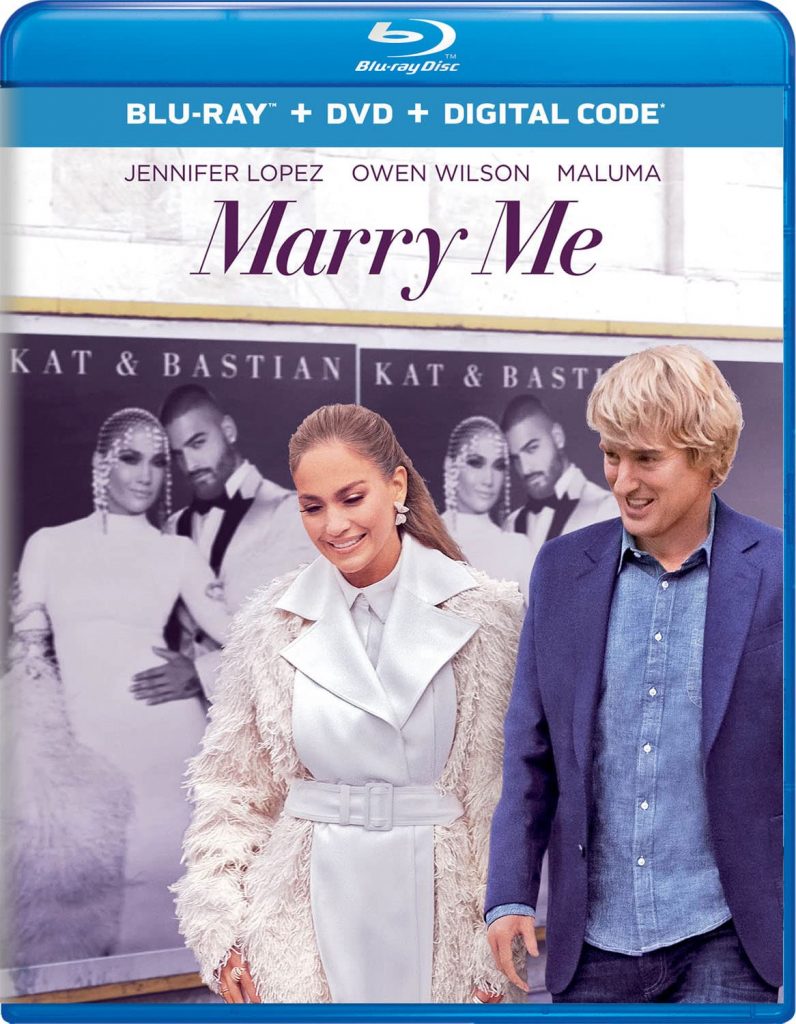