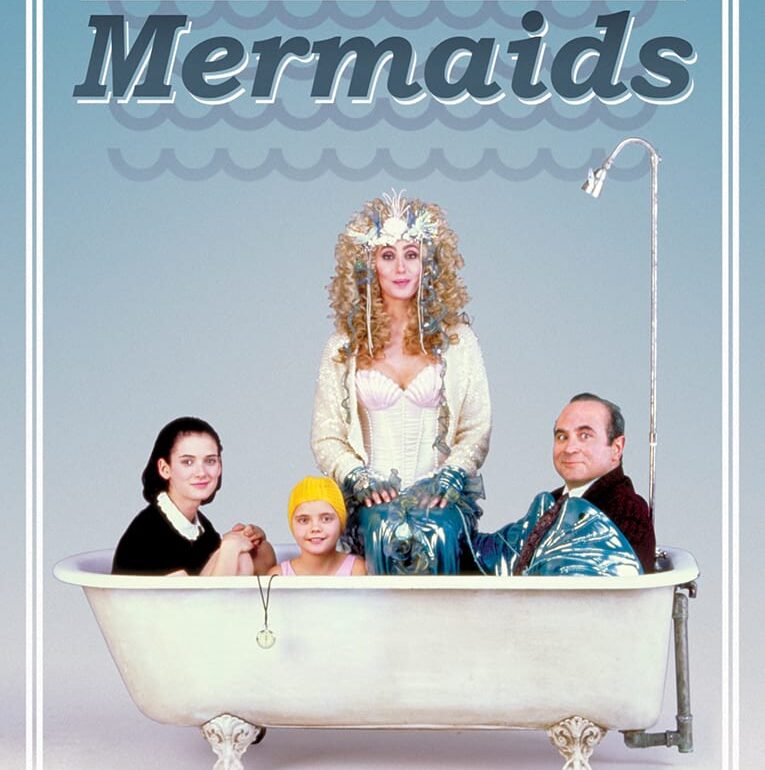 A delightful coming of age drama with a great sense of time and place, Richard Benjamin’s Mermaids (which was based on a book by Patty Dann) casts the leads perfectly, although Cher’s persona and star power almost overpower the film.

Plot: An unconventional single mother relocates with her two daughters to a small Massachusetts town in 1963, where a number of events and relationships both challenge and strengthen their familial bonds.

Review: Rachel Flax (played by Cher) is a very unconventional mother raising two daughters in the 1960’s. They move from town to town at the drop of a hat; Rachel’s legacy seems to be to begin relationships with men, and then leave when things get too complicated, putting her teen daughter Charlotte (Winona Ryder) in an awkward social position, and her youngest Kate (Christina Ricci) doesn’t seem to mind as long as there is a swimming pool somewhere where she can swim. When Rachel meets a local shoe peddler named Lou (a feisty Bob Hoskins), her world is turned upside down when the man turns out to be a pretty great guy who loves her and her daughters, but Rachel’s never had a lover who actually wanted to give more than he got. Meanwhile, Charlotte is going through her first hard crush with the school bus driver, a handsome lug (played by Sixteen Candles‘ Michael Schoeffling), who eventually returns her attention and sends her spiraling into a conflicted love tizzy. Charlotte’s main goal in life until that point has been to become a nun, so the romantic feelings prove a conflict of interest.

A delightful coming of age drama with a great sense of time and place, Richard Benjamin’s Mermaids (which was based on a book by Patty Dann) casts the leads perfectly, although Cher’s persona and star power almost overpower the film. Ryder shines in a complicated role, and along with Great Balls of Fire, she proved that she was a great supporting actress capable of infinite nuance. The soundtrack is full of source songs from the era, and the movie constantly surprised me with its sweet heart.

Olive Films just released Mermaids on Blu-ray, and as I’d never seen the film before this viewing I can’t compare a DVD transfer to this high definition transfer. The picture quality and sound were up to my standards for a catalogue title on Blu-ray, and though there weren’t any special features, the movie is still very much worth owning.