A goofball lark of a movie with Estevez and Sheen coasting with their easy charms, Men at Work is the sort of movie that never gets made anymore, and so it’s fun to watch it as a throwback to the days when I was growing up.

Two garbage men find themselves in big trouble when they find a dead politician in a trashcan.

Garbage men Carl (Charlie Sheen) and James (Emilio Estevez) are partnered up on their route and are best buds, and they have little ambition in life other than to score babes on the beach, catch some waves on their lunch hour, and just skirt on by. When they carelessly toss customers’ trashcans after emptying them, their boss puts them on probation and has them ride with his brother-in-law, a hardass named Louis (Keith David) who is taking notes on every little thing they do wrong. When they’re all on their route, they discover a dead body – that of a local politician – in a waste barrel, which throws Carl and James for a loop because the night before they played a practical joke on the guy by shooting him in the butt with a pellet gun. Thinking they killed him with their gag, they try hiding the body, but there’s so much more going on that they couldn’t possibly know or understand how deep they’re in it. The politician was killed for knowing where a bunch of toxic waste has been dumped (in the ocean nearby), and for threatening to go to the press with a cassette tape he recorded of all the dirty secrets he had, but because Carl and James think they’re responsible for the guy’s death, they – and Louis – scramble to put the pieces together and fix the mess they’ve found themselves in before they end up in trash cans as well. What ends up happening is they unleash a war against the corrupt businessmen behind the toxic waste and all their Hazmat suit-wearing goons, and these men at work will definitely catch some heat as they fumble around trying to survive.

A goofball lark of a movie with Estevez and Sheen coasting with their easy charms, Men at Work is the sort of movie that never gets made anymore, and so it’s fun to watch it as a throwback to the days when I was growing up. This movie was very popular in my neighborhood where I lived, and all the kids used to talk about it, and yet I never watched it until now for this review. It has a really good reggae / hip-hop soundtrack, and the jokes and comedic out-of-reality approach almost make it a spoof, but it has its chuckles in the right place. Estevez also wrote and directed it.

MVD Rewind Collection has just released Men at Work on Blu-ray, and while it has a nice high definition transfer, there aren’t really any special features, aside from the trailer and a fold out poster. 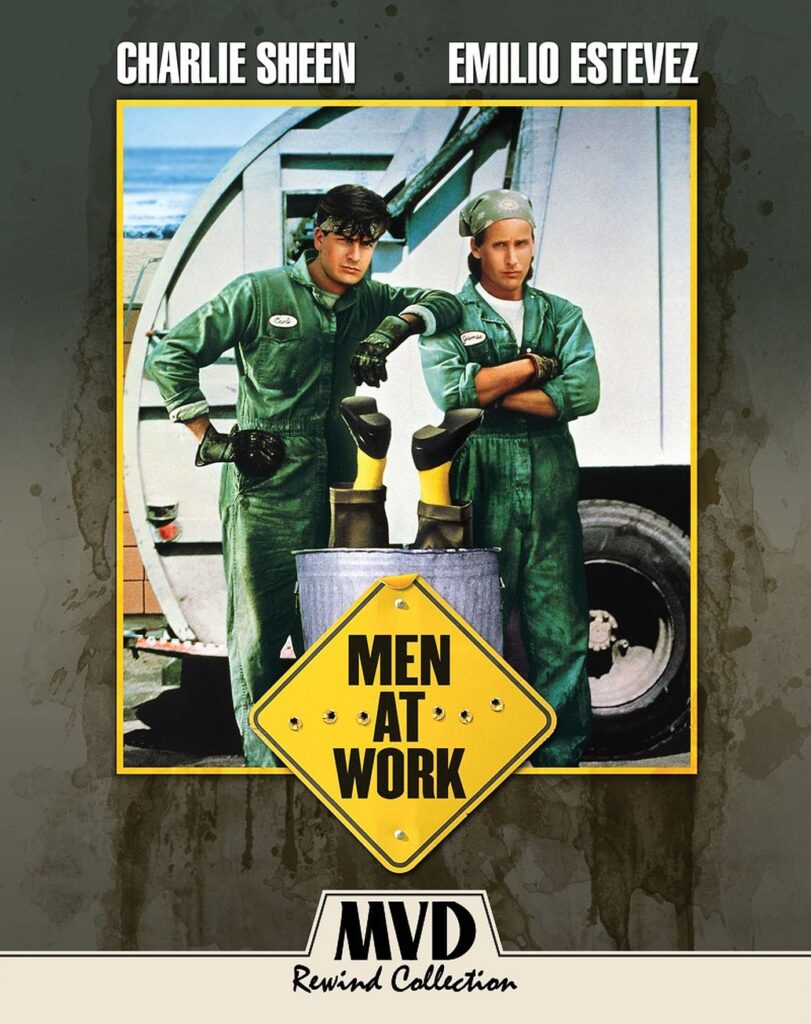