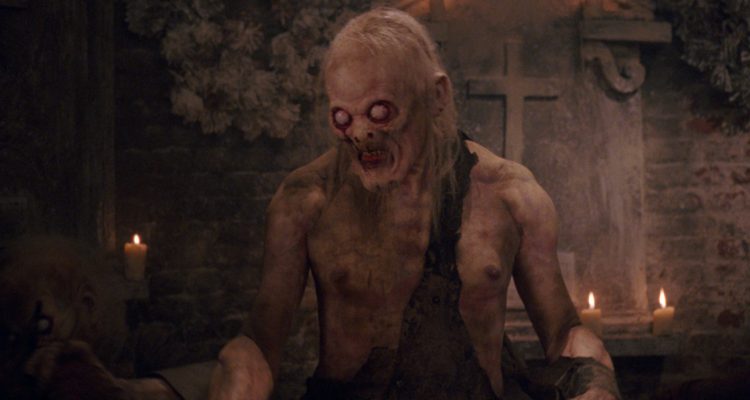 Lurking Fear is a nice melding of the crime genre with the horror. While it’s not particularly “scary,” it does feature some very creepy make-up work and stylish cinematography, and the performances are all perfectly in synch with the material Full Moon was producing and nurturing during the era.

Plot: The town of Leffert’s Corners has been plagued by unearthly beings for decades, and now there is only a few people left, including the local priest and a woman traumatised by the death of her sister. But when John Martense turns up to claim his illicit family fortune, with bad guys in pursuit, the last stand had become a lot more complicated. Supposedly based on the writings of H P Lovecraft.

Review: Courtney Joyner’s Lurking Fear was inspired by a story by H.P. Lovecraft. It’s a Full Moon production shot in Romania, and so it’s at the very least a handsome looking horror film, if not a faithful adaptation of the original story. Joyner is one of the unsung screenwriters of the ’80s and ’90s, with titles like Vietnam, Texas, Prison, Trancers III, and other choice titles like Class of 1999 and Nautilus to his credit, but he’s also an avid film historian, so if you’ve ever watched one of his films you can see the pure joy and richness of a lovingly cultivated film history infused into his work. His low budget Lurking Fear is such a film. It’s the sort of story where the heroes are fringe-benefit rascals, like the just-released-from prison John (Blake Bailey), who throughout his entire incarceration has kept a piece of a map, leading to a fortune in cash. As soon as he’s released, he goes straight for the money, but there are serious ripples in his plan: His associate – a seedy mortician (played by Vincent Schiavelli) – screwed up his side of the bargain by getting tangled with some true villains, lead by a psychotic career criminal (played by Jon Finch), who comes to town with only one goal in mind: get the cash. Turns out that the town (which has virtually been vacated) is infested by a race of subterranean mutated creatures, intent on feeding off the stragglers that still remain. Also in town at this inopportune time are a doctor (played by Jeffrey Combs) and a commando babe looking for revenge (played by the fetching Ashley Laurence), and with all these agendas on the table, chances are there will be some serious collateral damage as the creatures come out to feed.

Shot on film with an interesting cast, on location in Eastern Europe, and utilizing the talents of Romanian craftsmen, Lurking Fear is a nice melding of the crime genre with the horror. While it’s not particularly “scary,” it does feature some very creepy make-up work and stylish cinematography, and the performances are all perfectly in synch with the material Full Moon was producing and nurturing during the era. Joyner makes the most and the best of what he was provided with, and it’s a shame he didn’t make more films after this.

The new Lurking Fear Blu-ray features a remastered 16×9 widescreen transfer, and the picture quality is vastly improved over the crummy full-frame DVDs that were in circulation for years. I’m really digging these new Full Moon Blu-rays; I’m seeing these films in a whole new way now that they’ve been carefully transferred to high definition. The disc is affordably priced, and the special features include a newly recorded (and very entertaining and informative) audio commentary by Joyner.