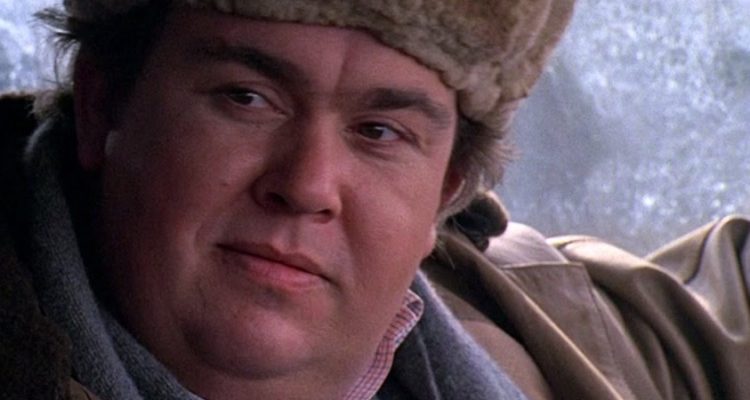 Of all the comedic actors I’ve seen, I think that John Candy definitely has the most loveable on-screen persona. A hulking build with an open and friendly face, John Franklin Candy looked like your prototypical oversized teddy bear. His characters were often good-natured, yet sometimes naïve, and he excelled at playing family men who were just trying to do right by their kin. He generally was paired with other strong, leading men (like Steve Martin, Dan Aykroyd and Tom Hanks) or took supporting roles in ensemble casts (like Home Alone or Once Upon a Crime) but managed to stand out in starring roles as well. Basically, John Candy fit into just about any comedic-type part you threw at him, and he almost always found a way to excel.

When I think of John Candy, it’s impossible not to immediately think of the 1985 comedy Summer Rental. Playing a burnt-out Chicago air traffic controller, he packs up his family and takes them down to sunny Florida for a vacation. Simple enough, right? Sure, but Candy and his family face all sorts of problems, such as severe sunburn, snobby locals and, oh yeah, staying in the wrong house for a few days, only to scare the hell out of the rightful owners when they return home. It seems every ignominy and frustrating circumstance can be thrown at Candy’s character, but he manages to keep a stiff upper lip and good cheer, despite the mounting annoyances. It was this cheerful persona that was the hallmark for most of his career.

I mentioned that Candy had many outstanding partnerships with other strong comedic presences, but strangely, hardly anyone talks about his team up with Eugene Levy in the 1986 film Armed and Dangerous.  Playing disgraced police officer Frank Dooley, he partners with failed lawyer Norman Kane (Levy) to take on new careers as security guards.  Here, was see a more daring John Candy character, who isn’t afraid to dress up in drag to elude the bad guys or stick a switchblade into a monster truck’s wheels to piss off some rude co-eds. He also takes on the imposing Tiny Lister, a move his character from Summer Rental would never dream of. Oh yes, and who can forget the scene where he hilariously lip-reads what Robert Loggia and Kenneth McMillan’s characters are saying.

Some would say that the pinnacle of Candy’s career was co-starring in the seminal John Hughes flick, Planes, Trains and Automobiles. Playing nomadic salesman Del Griffith, he is the perfect foil for Steve Martin’s straight-arrow and grumpy account executive. Endlessly cheerful and seemingly oblivious to Martin’s annoyance with his character, Candy manages to charm people into buying shower curtain rings (of all things) to pay for their breakfast when they’re out of cash, and drives Martin nuts when they’re sharing a room…and no, his hands aren’t between two pillows. While there are plenty of laughs in the movie, it is arguably also one of Candy’s most emotional roles, and I dare anyone to have a dry eye by the ending.

When I think of Candy’s best starring role, another John Hughes comedy, Uncle Buck, comes to mind. Play boorish (but again, good-natured) slob Buck Russell, he is pressed into babysitting service by his brother Bob, and on the surface, there’s no one more ill-equipped for the role than Buck. He makes enormous pancakes that no kid can eat, attacks a drunk clown who is supposed to show up for his nephew’s birthday party and spends a lot of time on the couch with the family dog, sleeping and watching television while eating cereal.  However, Buck uproariously shows his mettle as a family protector, taking on the school principal (and giving her 25 cents to have a rat gnaw that thing off her face) and bouncing a few golf balls off his eldest niece’s creepy boyfriend, Bug. Like most Candy films, Uncle Buck has a ton of heart as well as laughs, and the burly Candy has more than a little to do with that.

On March 4, 1994, John Candy passed away at the age of 43 while making the utterly forgettable western-comedy Wagons East.  It was an early and sad end to what was a terrific career.  I would like to remember him not for this film but for his good-natured characters, like Chet Ripley from The Great Outdoors, who was willing to eat a 96-ounce steak so that his family could eat for free. Or the hapless titular character from Who’s Harry Crumb?, who inadvertently played footsies with Jeffrey Jones under the dining room table. Or even Gus Polinski, the Polka King of the Midwest, from Home Alone. John Candy created many memorable characters throughout the years, and we are all the more fortunate that he cast such a large shadow across the hallowed halls of comedy lore.