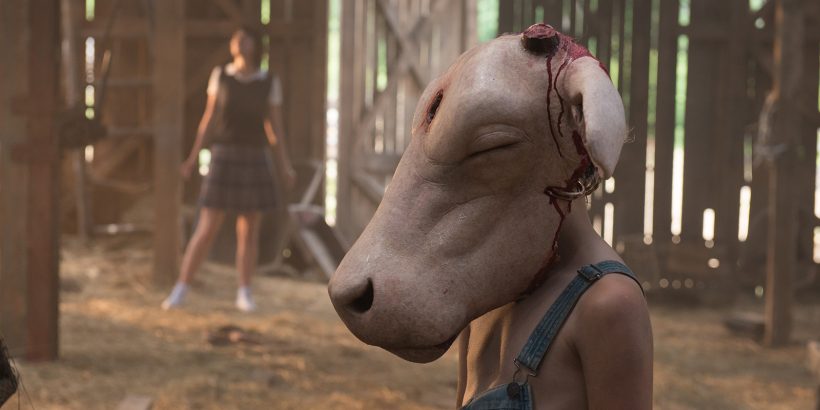 Leatherface has some imaginative kills and graphic violence aplenty but if you’re looking for some interesting backstory then you’ll be sorely disappointed.

Plot: A teenage Leatherface escapes from a mental hospital with three other inmates, kidnapping a young nurse and taking her on a road trip from hell, while being pursued by a lawman out for revenge.

Review: Leatherface has been on my “must-see” list for quite some time as I love the Texas Chainsaw series. Even the entries which everyone else hates I still find something to enjoy. The trailers promised this would be one of the bloodiest in the franchisse but it was also set to be a genuine prequel to the original Texas Chain Saw Massacre. It does have plenty of graphic violence (unlike the original) so gorehounds will find plenty to enjoy but for me it was seriously lacking.

We get introduced to younger versions of iconic characters like Grandpa, Nubbins Sawyer (AKA the Hitchhiker from the original) and more but then the story proceeds to ignore them and gives us a group of crazy youngsters who kidnap a nurse from a mental institution and go on a killer roadtrip.

That’s all well and good but I thought the point of this movie was to maybe give us a bit more backstory into the Sawyer family but sadly we don’t get any. The film mostly goes for cheap gore as our group of crazies leave a trail of carnage in their wake and like I said, there are some entertaining gory moments but it left me cold as I didn’t care about any of the characters or who lived/died.

Overall, Leatherface has some imaginative kills and graphic violence aplenty but if you’re looking for some interesting backstory then you’ll be sorely disappointed.