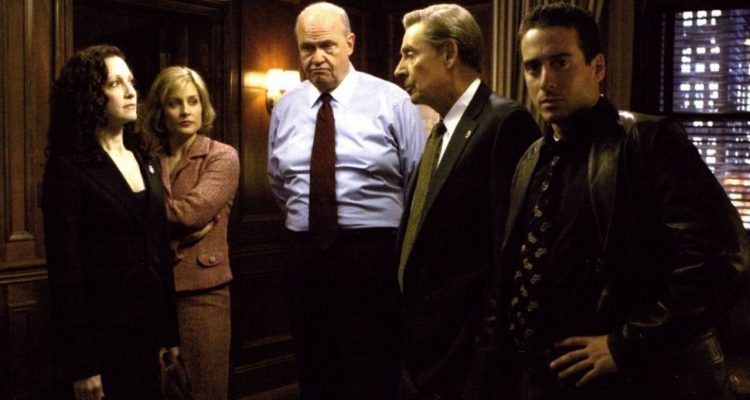 An effective if not always remarkable spin-off from the long-running franchise that is engaging despite some initial restrictions.

Review: The third direct spin-off of the franchise is also the first one to deal directly with just the legal side of the whole procedure. It includes a look at a new District Attorney division, finding the truth in the actual casein contrast to winning, the DA investigators and the jury on select episodes. It features one crossover episode each with both the original show and SVU respectively. Other characters from the franchise appearing include: Lennie Briscoe, Arthur Branch, Jack McCoy, Ed Green, Anita Van Buren, John Munch, Joe Fontana, Casey Novak, Elliot Stabler, Olivia Benson and Dr.s Rodgers, Warner and Olivet. In addition to some minor judges and lawyers guest starring, the biggest (yet pleasant) surprise is seeing the lawyer character Jamie Ross now presiding as a judge.

Aside from sharing the characters of the first two initial shows, it also shares many of the same gripping real-life inspired crimes while adding a clever twist on all the various assaults, hate crimes and scandals. It’s not as brutal as any of the shows are known for but this still has a different side of the legal teams still yet not seen since for this franchise. The way they often open up with the defendant (often a criminal or someone with a scumbag lawyer) prepping their legal argument. It’s sorta similar to how the Criminal Intent spin-off always starts off in the first hour with the criminal’s viewpoint before finally being arrested and engaging in mind-games with the detectives.

Had it had more time, I think it could’ve been more gripping as its own show bit as for now this whole affair is best enjoyed as side episodes of the series but the crossover episodes were a nice touch. The actors are all beyond reasonable in portraying the different voices in the room against the third person perspective and the guest actors are all excellent, including Lorraine Bracco, Peter Coyote, Candice Bergen and Wendell Pierce. I don’t find it as brutally fascinating as later short-lived spin-offs like Conviction and Chicago Justice but it still does the trick. It would’ve been neat had these characters later continued on in the other three main shows but as of now this is just an interesting compliment to the main meal that is this addicting saga. If you find the used DVD and have 9 hours to kill one less busy weekend, eat it up!