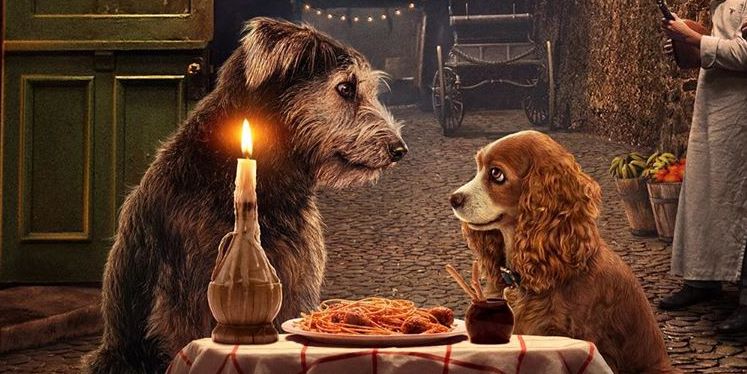 Lady and the Tramp manages to maintain the charm of the original classic despite the setbacks of the CG faces not being as expressive. It’s on Disney+ from this week and it’s set at Christmas so now is perfect time to check it out.

Plot: CGI and live-action re-imagining of the 1955 Disney classic.

Review: Disney+ is launching this Tuesday but we got an exclusive look at some of their upcoming shows and movies; one of those movies was the new live action adaptation of Lady and the Tramp which I was secretly looking forward to. The animated film was always a childhood favourite but with every other Disney classic getting a live action reimagining it was only a matter of time until this got an update.

Lady and the Tramp goes the same route as The Lion King by doing the dogs as CG with a mixture of live action animals, but I far preferred this as a viewing experience. It still suffers from the CG faces not showing the expressions that the original animated ones could so it isn’t quite as warm emotionally but it still manages to have a lot of heart.

The voice cast do their best to make Lady and the Tramp as believable and lovable as possible and for the most part it works. I was immediately engaged and it grabbed me because it was just so darn cute. It still feels contemporary but also like vintage Disney with some wonderful music and gorgeous set design. Justin Theroux makes Butch AKA The Tramp the roguish character he always was and Tessa Thompson does just fine as Lady but the scene stealer for me was the legendary Sam Elliott as Trusty. His cool drawl provides several great moments of humour making him such an appealing character.

Ashley Jensen is the voice of Jackie and I’m delighted they got an actual Scottish person to do the accent and she uses some great colloquialisms which I’m sure will baffle North American audiences.

I heard a while back that the Siamese song wouldn’t be making an appearance for obvious reasons and the new song the cats sing is fine but utterly forgettable.

It’s been a few years since I watched the original animated movie but I believe the story is pretty much the same with a few updates for a modern audience. The script has a few funny one-liners too with Butch and Lady sharing some entertaining banter.

Overall, Lady and the Tramp may suffer from the same issues as The lion King where the CG faces don’t emote as much as the original animated characters but if you’re a dog lover then you’re going to have a ball as it’s a delight for the whole family.