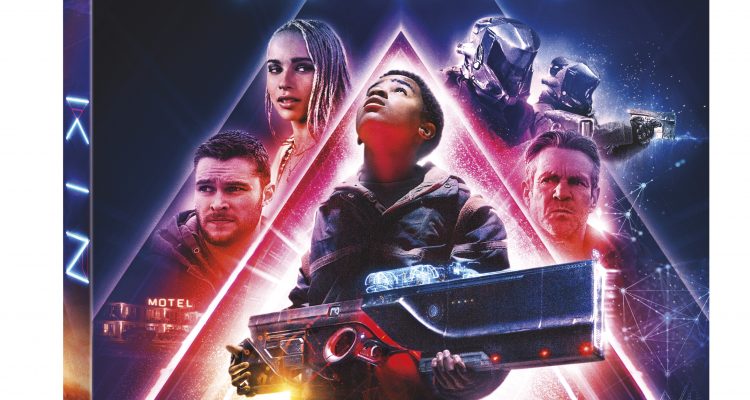 An obvious homage to James Cameron’s first two Terminator movies (there’s even a scene where T2 is acknowledged), Kin operates on a small budget and has some grand implications in the science fiction genre, but it falls short in style and execution, as well as in the character department.

Plot: Chased by a vengeful criminal, the feds and a gang of otherworldly soldiers, a recently released ex-con, and his adopted teenage brother are forced to go on the run with a weapon of mysterious origin as their only protection.

Review: An adopted African American 14-year old kid named Eli (Myles Truitt) is having trouble getting by at his Detroit school, where he’s bullied and made an outcast. His hardened dad (Dennis Quaid) loves him, but is tough on him, and we can see that Eli tries the straight and narrow path, but sometimes he breaks the rules to make some extra side cash, like scrapping at empty buildings around the city. He comes across a bizarre aftermath of a shootout between some guys in strange suits, and he finds a high tech weapon that he quickly learns to operate, despite its … otherworldly properties. He comes home and finds that his brother (his dad’s real son) Jimmy (Jack Reynor) has returned from a 6-year prison sentence, which doesn’t sit well with their father, who knows that Jimmy will soon be up to no good again. Sure enough, Jimmy is deep in debt for prison “protection” to a local thug, played by a scratchy looking James Franco. When the thug and his homies force Jimmy to rob his own father, the scenario goes from bad to worse when his dad is shot and killed, as well as the thug’s brother, which forces Jimmy to go on the lam. He takes young, impressionable Eli with him, and with a bag full of tens of thousands in cash, Jimmy lies to him that their father wants them to go on a road trip to bond with each other, and Eli goes willingly, with his powerful new weapon in his backpack. Relentlessly pursued by both the thug’s vengeful posse and a pair of spaceman bounty hunter-type pursuers, Eli has no idea that the next few days will be a major coming of age period for him as he discovers the truth about what happened to his father, and who he really is and where his destiny lies in the grander scheme of things.

An obvious homage to James Cameron’s first two Terminator movies (there’s even a scene where T2 is acknowledged), Kin operates on a small budget and has some grand implications in the science fiction genre, but it falls short in style and execution, as well as in the character department. I never bought into Eli or Jimmy’s side of things, but I found Franco’s thug character compelling more than the rest. The movie needed an overhaul to be a slam-dunk. From filmmakers Jonathan and Josh Baker.