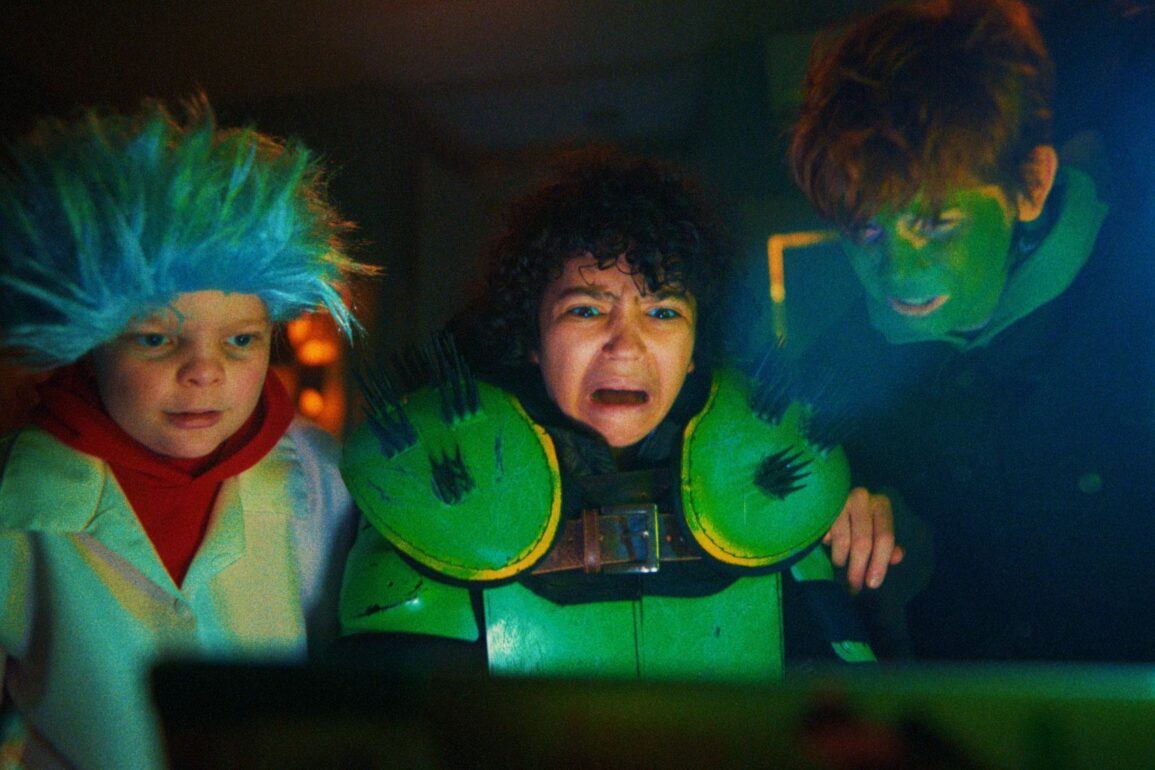 A promising setup and a game cast of interesting looking kids who aren’t annoying to watch, but certainly annoying to listen to with their constant foul, “R”-rated language, Kids vs Aliens is more than a lament for me as it represents both what I love and despise about movies at the same time.

Aliens land on Halloween in a small community, and a group of rascal kids have to go to war with them.

Halloween should be the sweet spot for pre-teen kids, and three best buds Gary (Dominic Mariche), Jack (Asher Grayson), and Miles (Ben Tector) are pretty creative and outgoing with their filmed wrestling matches in Gary’s barn, and lucky for them they have Gary’s older sister Samantha (Phoebe Rex) to sort of shepherd them and be their mascot, and she’s really pretty to boot, so good for them all! A local lothario who’s actually a hateful, spiteful loser and coward at heart named Billy (Calem MacDonald) and his two cronies lurk around the neighborhood and are a constant thorn in Gary and his crew’s sides by ruining their art projects or crashing their wrestling matches with wicked barbs and pithy sarcasm, and when Billy finally notices Samantha for the beauty that she is, he sets his sights on notching her for his belt, which makes him Gary’s mortal enemy because it’s obvious to everyone but Samantha that’s he a complete and utter piece of trash. Billy manages to convince Samantha to host a massive Halloween party for his friends while her parents are away for the weekend, and while knowing better than to cave into peer pressure, she goes against her better judgment and agrees. Big mistake. Aliens have just landed nearby (the prologue features their frightening landing and obliteration of some fishermen out at sea) and invade the Halloween party and begin abducting teens – including Gary and his buddies and Billy and his loser friends – leaving only Samantha to pick up the slack and attempt a rescue mission, which involves her donning a wetsuit and tracking the aliens to their lair in a cave where they perform unholy transformation rituals, but she finds a powerful weapon in a rad sword that she can use to even the odds against the alien horde!

A promising setup and a game cast of interesting looking kids who aren’t annoying to watch, but certainly annoying to listen to with their constant foul, “R”-rated language, Kids vs Aliens is more than a lament for me as it represents both what I love and despise about movies at the same time. I love a good kid’s adventure flick like The Goonies, Explorers, Russkies, Stand By Me, or even the more modern It and Stranger Things. But I despise the more modern and jaded sensibility of the younger generation’s penchant for relentless profanity, casual sexual material (remember that terrible movie Good Boys?), and filmmakers who treat childhood innocence as if it meant nothing. I don’t mind some scary violence, gore, and the threat to childhood with villains you love to hate, but Kids vs Aliens isn’t really for kids, even though it should be. It’s much more for the post-millennial generation raised on iPhones, easy access to instant porn, and Netflix’s approach to streaming ready-made and microwaved product on a menu rather than a shelf. This movie should’ve been a PG-13 adventure fantasy, but instead it’s a pretty rancid and jaded piece of work that feels like it’s been through too many recycled retreads of half-remembered better movies that knew where their heart was and how to share it properly with a broader, more appreciative audience. Director Jason Eisener did the equally repugnant Hobo With a Shotgun, which came from the same over-charred place of refried grindhouse mentality. If he’d scaled back the shit and pressed deeper into innocence for Kids vs Aliens, he might’ve had something special.

RLJE has just released Kids vs Aliens to some theaters. 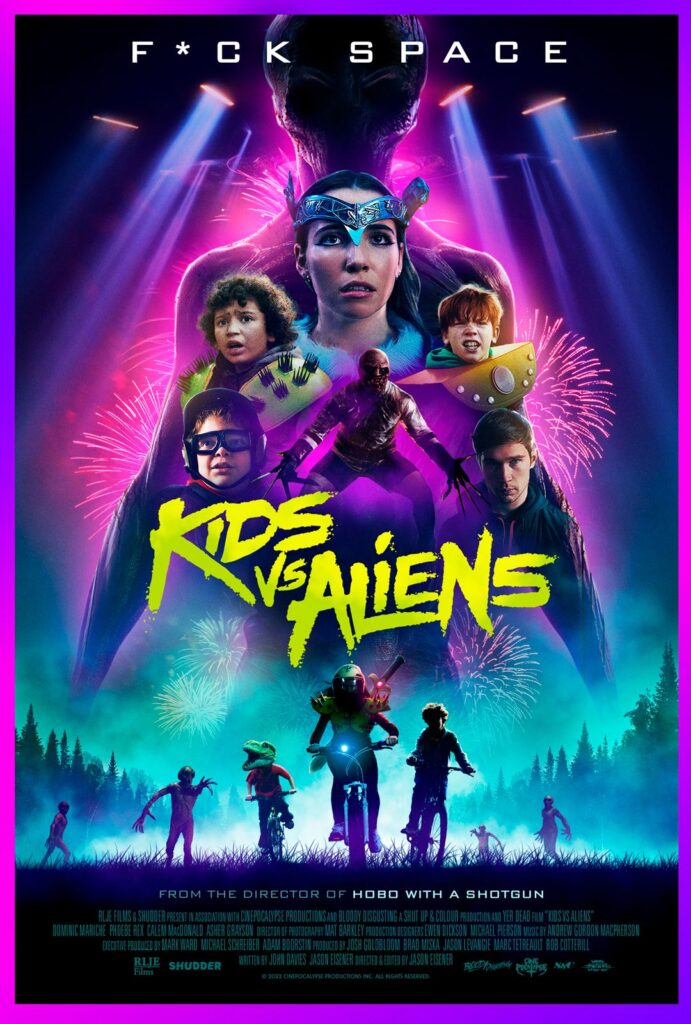