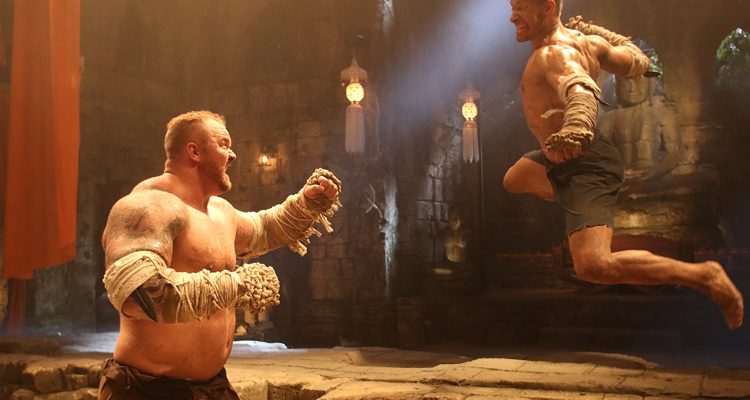 Plot: One year after avenging his brother’s murder, MMA champion Kurt Sloane finds himself imprisoned by a powerful gangster in Thailand. To win back his freedom, he must train for a fight against a 400-pound killer in an underground death match.

Review: The master and apprentice pair of Jean-Claude Van Damme (Kickboxer, Bloodsport) and Alain Moussi (Street Fighter: Resurrection) make a return to the martial arts arena and the iconic cult action film franchise in Kickboxer: Retaliation, a sequel to 2016’s reboot Kickboxer: Vengeance.  Dimitri Logothetis (The New Adventures of Robin Hood, Dark Realm) writes and takes the director reins from John Stockwell in the previous installment to create this sequel that works as a standalone story every bit as much as a follow-up to Kickboxer: Vengeance, with plenty of new characters and a new set of challenges.

This time around, Kurt Sloane (Alain Moussi) finds himself imprisoned for the murder of the previous installment’s antagonist, Tong Po, and offered a lucrative deal by sinister fight promoter and crime boss Thomas Tang More (Christopher Lambert, the Highlander series) to fight his champion, the freakish superhuman Mongkut (Hafþór Júlíus Björnsson, Game of Thrones).  More ups the ante by kidnapping Sloane’s wife Liu (Sara Malakul Lane, Sharktopus) while he trains in prison, discovering he still has much to learn about fighting via inmate Briggs (former boxing heavyweight champion Mike Tyson) and being reunited with his previous mentor Durand (Van Damme) who has recently become blind.  Several training sequences, chases and fights ensue in exotic locales on the road to the final confrontation.  Several other professional MMA fighters, kickboxers and athletes make appearances throughout the film, including Mauricio “Shogun” Rua, Wanderlei Silva, Roy Nelson, Renzo Gracie, Babalu Sobral, Rico Verhoeven and even Brazilian football legend Ronaldinho, among others.

While Kickboxer: Vengeance was a fun novelty and a return to the franchise, this sequel to the reboot works very well on its own and improves on many of the previous movie’s characters and developments.  Van Damme’s screen presence largely stole the show in Vengeance, to the point where he often overshadowed Moussi.  Here, however, Moussi’s Sloane comes into his own, finds himself humbled more than once all over again, and shines in every flashy fight sequence.  Lambert hams it up brilliantly in his villain role, and Björnsson’s Mongkut is among the most intimidating “monster antagonist” opponents since Ralf Moeller’s Brakus in the 1993 cult classic Best of the Best II.  Fans of the original set of films will recognize both thematic and stylistic nods to Mark DiSalle’s original and even two of the Albert Pyun sequels, all while fitting into this more unique entry to the modern franchise update.  The cinematography, dark yet colorful, works in tandem with the set locations pretty seamlessly.  In particular, one scene involving blue lighting and a pair of scantily clad, heavily tattooed female assassins is one of the most memorable in action films of the 21st century.

The Adam Dorn soundtrack ranges from catchy Thai style instrumentation to more generic and forgettable techno fare, and there are a few scenes where the sequencing of events becomes an issue (a blind Durand being taken to “see” Mongkut’s skills, for instance), as well as a highly questionable chain of events in the finale, but not much of that matters in the context of a movie like this.  It is easy to wonder if a few adjustments to the plot elements and characters could have made for this to be a story all its own, but as it is, it’s just fine.  In an era of “fan movies” thinly disguised as blockbusters, Kickboxer: Retaliation is a professionally made action flick for diehard fans.  This one is a major improvement over an already decent previous installment, and it looks like a third one is in the works.  If Kickboxer: Retaliation can be the rule rather than the exception, it bodes well for a possible resurgence of the genre for a new generation of audiences.