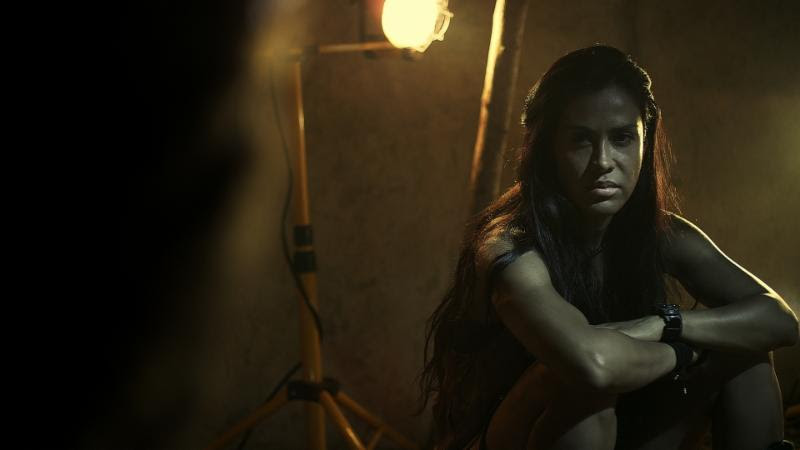 Curse of the Mayans (which is mostly in Spanish, with subtitles, by the way) isn’t going to reinvent the wheel, but it’s a cut above other movies of its type. I’m glad I saw it.

Plot: Dr. Alan Green an American Archelogist leads Danielle Noble an her team of cave divers on an expedition searching the Mayan ancient records. Instead of finding glory they will find hell hidden in the underwater caves of Xibalba.

Review: An expert diver in Mexico named Danielle (Carla Ortiz) is hired by a wealthy scientist named Alan Green (Steve Wilcox) to lead a cave-diving expedition deep in the wilderness of Mexico. Green’s objective is nothing short of incredible: He’s looking for the cradle of civilization and a Mayan secret that will change the world. Danielle’s team – including her adventurer ex-husband Many (Mark Tacher) – find themselves so deep in the underwater cave that they see things no man has seen in thousands of years, and they accidentally unleash an ancient alien race that is hell bent on escaping their prison and tearing the world apart. If the explorers don’t seal the cave soon, the creatures will destroy the world. Thanks a lot, Dr. Green!

A surprisingly solid little Raiders of the Rip-Offs-type adventure with a creature feature twist, Curse of the Mayans is compelling for three-fourths of the way in, but when the creatures show up it becomes a by-the-numbers stalk-and-assimilate thriller, which we’ve seen so many times before. A few years back there was a found footage explorer movie called The Pyramid that Curse of the Mayans ends up feeling like, which is a shame because the build up and the characters are all pretty interesting. I was especially impressed by the two leads, played by Ortiz and Wilcox, who bring a strong maturity level to their otherwise standard roles. These aren’t teenagers or young adults; they’re adults, and they act like it, and every time they were on screen, I paid attention. The movie is a little creepy with good cinematography, and I could feel the danger they faced in South America. There’s a long scene where the excavation crew encounters a bunch of Mexican drug dealers, and the situation goes south very quickly, and the way the scene played out was pretty fantastic. It’s easily the best scene in the whole movie, and that scene alone made the movie worth watching. Curse of the Mayans (which is mostly in Spanish, with subtitles, by the way) isn’t going to reinvent the wheel, but it’s a cut above other movies of its type. I’m glad I saw it. From director Joaquin Rodriguez.