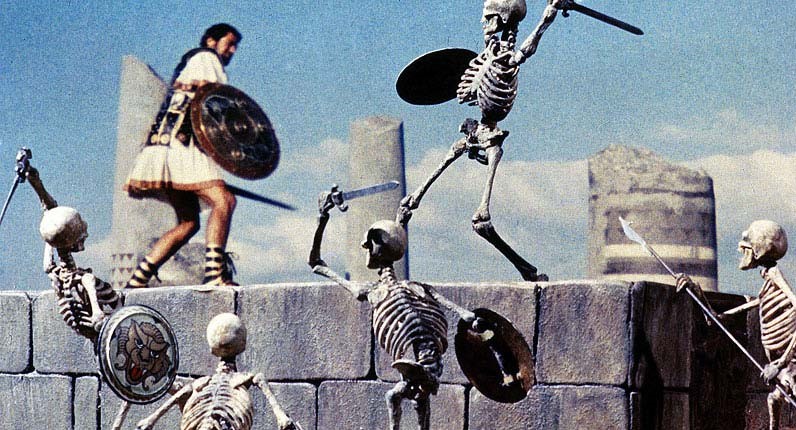 Jason and the Argonauts (1963) Review

Its legendary status is well earned; this is a fun adventure romp with a great score, fantastic visuals, and some nice action set pieces.

Plot: Jason recruits Greece’s mightiest warriors to help him sail to the other edge of the Earth in a quest to find the mythical golden fleece.

Review: Ray Harryhausen is a revered name, not just in the world of visual effects, but in movie-making in general. As has been pointed out, it is rare for what equates to a movie technician having such a profound impact on the movie, that they rise above the importance of the director or writer. Such is the influence that Harryhausen had on the films he made, though, and that is never more evident than Jason and the Argonauts.

The story for Jason and the Argonauts is taken out of Greek mythology, with some “artistic licencing” thrown in. It’s not Shakespeare, but it serves the purpose of moving the narrative along and, most importantly, getting to some of Mr. Harryhausen’s incredible creations.  I know that the modern audience has been spoiled on images created through a computer and thrown out on the screen; the advancements with movie technology have been amazing, and if done right, you can barely tell the difference between the actual human performer and the one created in an electronic box. That being said, there is something about good old-fashioned physical effects, and while those weaned on modern effects may sneer at Harryhausen’s stop-motion animation technique, there is a charm about the creatures that he created. As one friend pointed out, it’s not just that he made impressive sculpts of mythological creatures – they all had a personality.

While my favourite Harryhausen creations are still found in Clash of the Titans (specifically Medusa and Pegasus), Talos strikes quite an impressive and imposing figure, causing nothing but grief for the Argonauts. Likewise, the Harpies and the Hydra are spectacular (especially considering animating the seven heads of the Hydra must have been a pain in the ass).  The skeleton scene is famous for a reason and is definitely the best action sequence in the film.  My favourite was the crashing rocks, though. Amidst all the monster madness, there’s something to be said about an impassible section of rock that can smash your ship to pieces, leading to a truly desperate Hail Mary that leads to an awesome resolution.

That’s not to say the movie doesn’t have its warts.  The love story feels very contrived, and the acting at times is mugging at its worst (particularly the painful series of closeups with King Aeëtes during the skeleton battle that is a master class in over-acting).  These are small gripes, though, in what is an exceptionally fun movie.  It’s helped by Bernard Hermann’s terrific score (which oddly features no string instruments, but hits the right notes of adventure and foreboding), beautiful visuals and a generally likable cast.  I really liked the Gods’ scenes, especially, with the smoky visuals depicting that the characters living in the clouds, and the petty and ridiculous bickering between Zeus and Hera (which, if anyone has taken a Mythology or Philosophy course, knows is bang-on).

So, if you haven’t given yourself the pleasure of seeing Jason and the Argonauts, I highly recommend you do so. In today’s trying times, there is no better reason to treat yourself to almost two hours of high adventure and visual thrills.