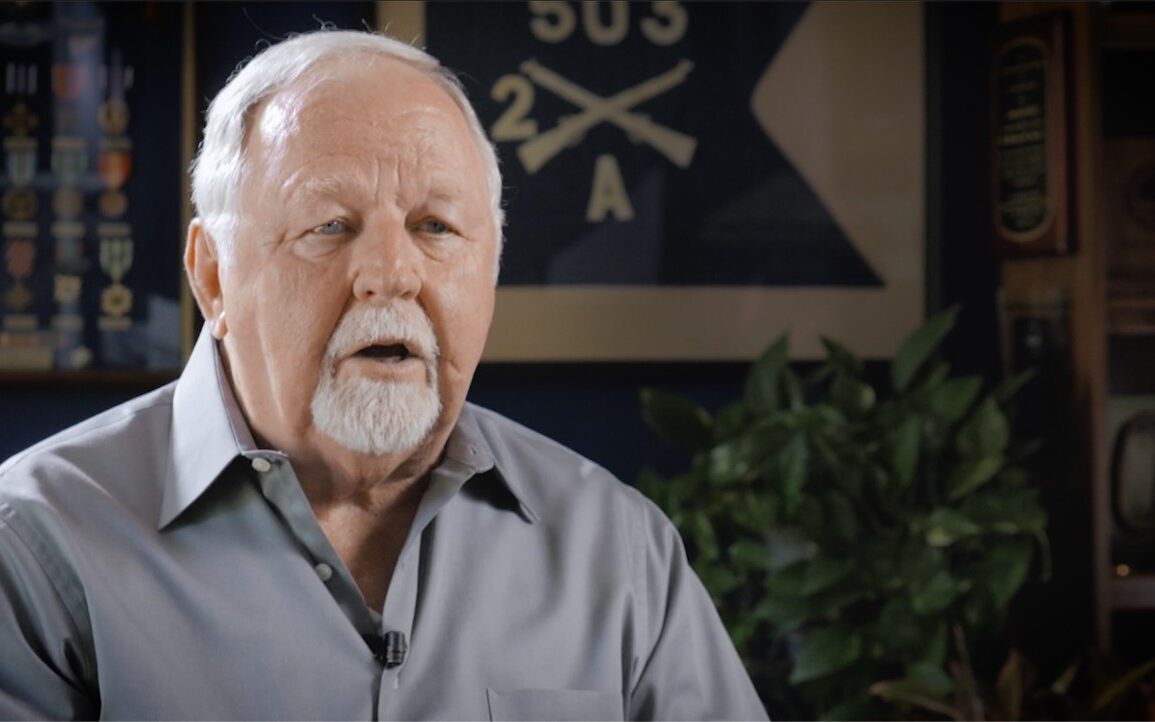 My Father’s Brothers, a true account of an army airborne company outnumbered in the jungle during the Vietnam War, is a confronting but beautiful new movie about one pivotal day in American history that affected the lives of 140 soldiers

On June 29, 1966, surrounded and outnumbered 10-to-1 in the dense Vietnam jungle, an army platoon is savagely attacked while they wait for reinforcements from their company. 50 years later, survivors tell their story of tragedy, resourcefulness and heroism. Some volunteered for the army as teenagers. Others were drafted. Some went back to Vietnam years later in hopes of finding closure and peace. All share a bond that cannot be broken.

Shawn Kelley, whose father was one of these men, talks to us about the film (now available on digital and DVD).

The word hero probably gets thrown around too much —  these men, including your father, were undoubtedly just that though.

I sure think so. But if you were to ask any of veterans in this film if they are heroes, they would say, “no.” Then they’d point to the rest of the Airborne company and say, “but my brothers are.”

What did you know about this event before you decided to tackle a film on the subject?

Growing up, I knew my father had been an important battle during his first tour of Vietnam. I knew one of his men earned the Medal of Honor. But that was about it. He didn’t talk about the war, and when asked, he would say very little. It wasn’t until recently that I started to ask the right questions.

When I started interviewing him for the film, I learned more than I ever knew before about his time in combat. But when I started interviewing the other veterans in the film, I was blown away. They really opened up to me – I was shocked to find out what they went through. I think my dad only wanted to tell me so much, because I am his son – he wanted to protect me, in a way, from the horrific details. But why did the other veterans open up so much to me? I met them all the night before I interviewed them at a 173rd Airborne Reunion at Fort Benning. Thinking back now, it must have been because they were at a reunion and were comfortable being with their brothers. And because I was Jack Kelley’s son, and they trusted him.

Did you have a lot of resources at hand?

You know that adage, ‘ignorance is bliss?’ Well, it applies to first-time filmmakers. I was a creative director in the advertising world, so I knew just enough about filmmaking to be dangerous. When a roadblock would present itself, I had the mindset that I would just figure it out. A boot-strap mentality. Fortunately, I also had some wonderfully talented filmmaker friends that brought a lot of passion to this film. I didn’t know that filmmaking was so damn hard when I started this, but I must tell you, it has been the most important project I’ve worked in my career. Bringing these veterans’ story to life has been an honor. 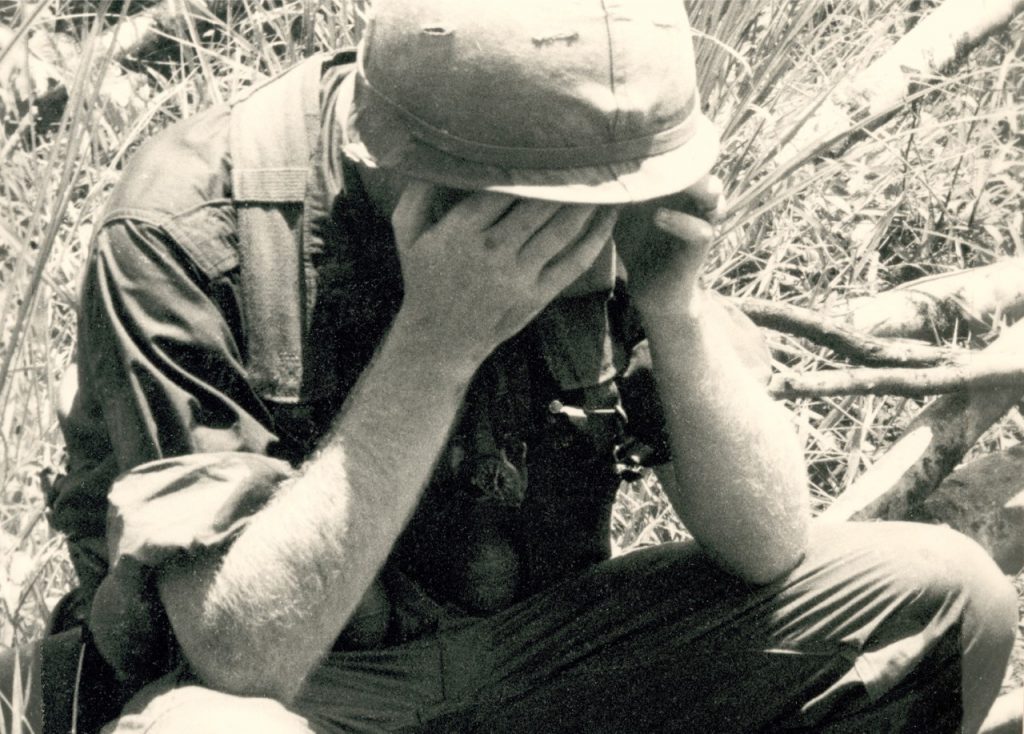 And in your interviews and digging through the archives, for info, did you learn anything new you didn’t know previously?

Absolutely. The paratrooper company had four platoons. Some of the veterans I interviewed were in the same platoon, but I was able to get different viewpoints of the battle from guys that were not only in the platoon that was initially attacked, but from the other platoons that were trying to rescue them. They were spread too far apart, and the jungle was too thick. My dad and I spent time in the National Archives in College Park, Maryland searching for not only applicable b-roll, but also military after action reports on file. After 50 years, I wanted to make sure we had all the facts.

Were you in in the field yourself?

By “in the field,” I’m not sure if you mean “in the military” or “gathering research,” so I’ll answer both

I was not in the military; I was a military brat. But growing up with my dad in the army for 20 years, with him earning the silver star, bronze star (seven times) and the purple heart, and with him serving with the 173rd Airborne, the Big Red One, the 82nd Airborne and the Fifth Special Forces Group, I have an appreciation, respect, and empathy for those who serve our country. And after finishing this project, my empathy and respect for our veterans has gone through the roof.

As for research..Yes, not only did I conduct the interviews, but I also worked with my dad and the other veterans to make sure facts were as accurate as possible. I also did most of the searching for relevant content to help bring this story to life in a way that was respectful and meaningful.

And your father – what kind of a man was he? How did this event change not only him but those around you?

My dad has always been driven. He was a Citadel graduate and went into the army as a second lieutenant. Later he volunteered for Vietnam to get more experience as an officer. He will tell you that he did not volunteer for his second tour. He worked at the Joints Chiefs in DC and the National Emergency Airborne Command Post (he carried the football). He retired after 20 years as a Lt. Col. and the deputy commander of the Fifth Special Forces Group. Along the way in the army, he picked up two master’s degrees, one in management, one in education. After his time in the service, he became a minister. He is one of the most honest and funniest men I’ve ever known in my life. For many years, he has been driven to help people that need help. His time in Vietnam shaped who he is today. He, and my family, are very lucky. Many veterans aren’t so fortunate after their experience in combat.

What would you like people to take away from the movie?

You’re in advertising and branding. When did you decide to cross over from shorts to feature directing? When did you know it was time?

It wasn’t planned, it just happened. I bought a new camera system and asked my dad if I could document some of his experiences about his time in Vietnam – to preserve some of his memories. A few weeks after he agreed to do that, he invited me to his Airborne unit’s reunion, which coincidentally was the 50th anniversary of the June 29, 1966 battle. I thought to myself, “this could be an incredible story…” I borrowed some equipment from a director friend of mine, packed up my car, and headed to the reunion at Fort Benning. And then my world changed.

Where did you learn your craft? Schooling? Books? On-the-job?

Yes, to all! It started in college – I had a design degree and took some photography courses. But the storytelling really came from my time in advertising. Granted, those stories were shorter – sixty seconds compared to 73 minutes – but that’s where my sense of pacing and timing came from. For the technical side, I read a lot and took a number of courses. But ‘doing’ is the greatest teacher. And I was so fortunate to have talented filmmaking mentors and team members along the way – they were invaluable.

This has been an amazing journey. My dad and I are closer than ever before. And I now have several warriors that I’m proud to call friends.