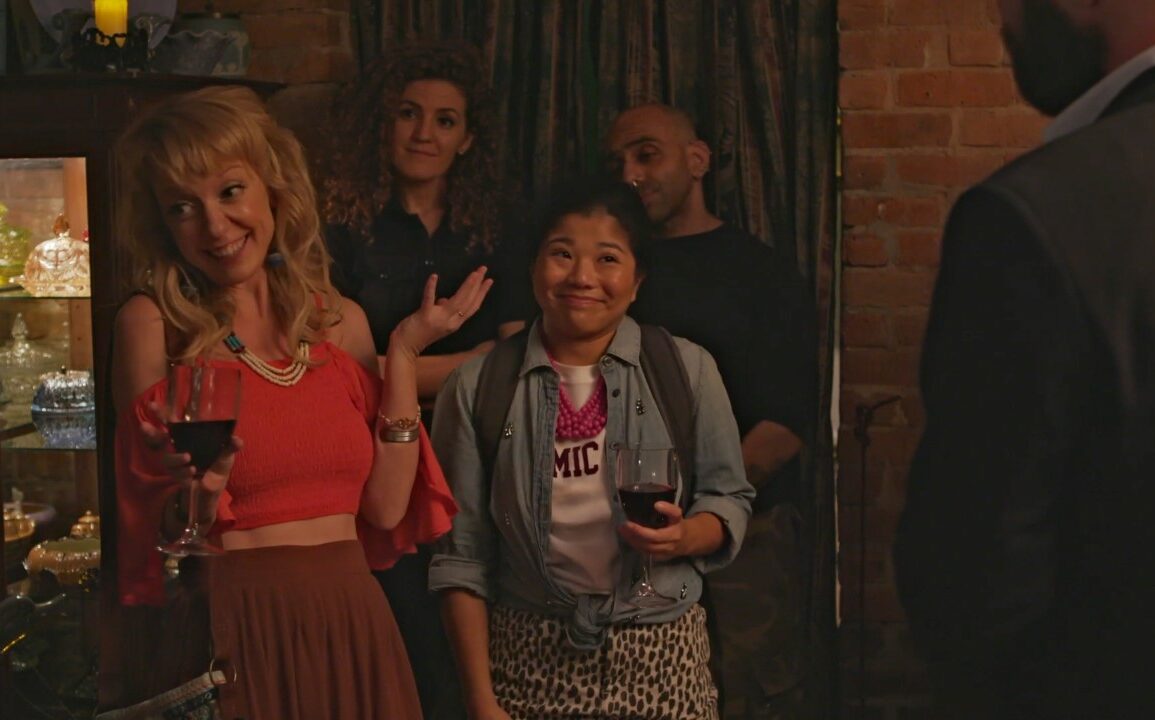 Rachel Kay Barclay, writer, producer and star of the new online series Human Telegraphs gives us the breakdown on the filming in New York, goals for the shortform series, and playing a ‘quirky’ New Yorker!

What a joy – it really is one of those shows that ‘we need more of right now’, isn’t it?

Wow, thank you for the wonderful compliment! As a writer it was definitely my goal to create and write narratives for Human Telegraphs that were light, fun, and that explored the humanity in people — and all of the things that unite us and draw us together as a part of the experience of being flawed and human in an imperfect, yet often comical, world.

Was that part of the appeal – making a positive, joyful and sweet show to break up the miserable times of late we’ve all had?

Well, I actually created and wrote the show back in 2017, before a lot of the challenging issues we are now facing began. We filmed the show at the end of 2017 as well. It just took a while to get through post-production, partly due to the pandemic.

It does feel like the right kind of tone and messaging for these challenging times though, so perhaps our delay in post-production worked out for the best; now we’re able to share this quirky version of NYC and these larger-than-life characters with the world when many may just need to feel good about life, themselves, and each other again.

Who hatched the idea?

I created the show premise and wrote all of the characters and narratives. That being said, my co-producers, Kayla Conroy and Fern Lim, were an instrumental part of the creation process, especially since the characters Margot and Trisha are based off of them! They also helped me brainstorm different message delivery ideas. I don’t remember how many of the ideas I actually ended up using, but the brainstorming sessions themselves were a great way to situate myself more deeply into the world of Human Telegraphs.

Was it always intended that the three of you would star, as well as serve behind-the-camera roles too?

Yes! We wanted to create an artistic vehicle to showcase our talents and we wanted to have artistic control over the project, so it made sense that all three of us would produce—  that I would write,  Kayla would direct, and that Fern would be the show’s art director. All of these behind-the-scenes roles spoke to our personal strengths as well.

How similar are you to your role?

Lily is a comical, exaggerated version of some of my quirks and some aspects of my personality. I think a lot of the comedy comes from us (Fern, Kayla, and me) not taking ourselves too seriously and finding moments to laugh at ourselves while playing our characters.

Was it easy to get locations?

While Kayla worked on this the most as director, I do remember there were some locations that were more challenging to secure than others, specifically the mansion we shot in for episodes 7 and 8. We ended up securing a beautiful mansion near the West Village in the end, which was a super dreamy spot to film in.

A huge challenge for our overall shoot was the amount of locations we needed to film in and our ability to perform big company moves for all of our cast, crew, and equipment to reach those locations, which spanned across Brooklyn, Manhattan, and Queens. You’re always crunched for time on Indie shoots and we tried to avoid wasting time in NYC traffic as much as possible.

The film is premiering at a couple of festivals – and in Manhattan, which is pretty special. How rewarding is that?

It feels extremely special and like everything is coming full circle, since we created and filmed the show there. We actually just had our World Premiere at the Big Apple Film Festival in Times Square. It was fantastic to be able to celebrate our Premiere in the city where it all began and where we have forged so many memories as a creative team!

We also recently found out we won Best Web Series at the New York International Film Awards, which also feels exciting coming from our hometown.  And we are screening Human Telegraphs this upcoming weekend at NYC Web Fest, an international film festival that celebrates series from around the world. So we’re super pumped about that too!

Do you hope the show becomes so successful that a network picks it up? Is that the plan?

Yes, our goal is to transition Human Telegraphs to a 30-minute episodic format, and to create it in partnership with a major streaming platform, so fingers crossed!

Thanks for giving us a laugh and putting a smile on our dial!

Thank you so much for this wonderful interview! And for all of your kind thoughts on Human Telegraphs! This has been fun!