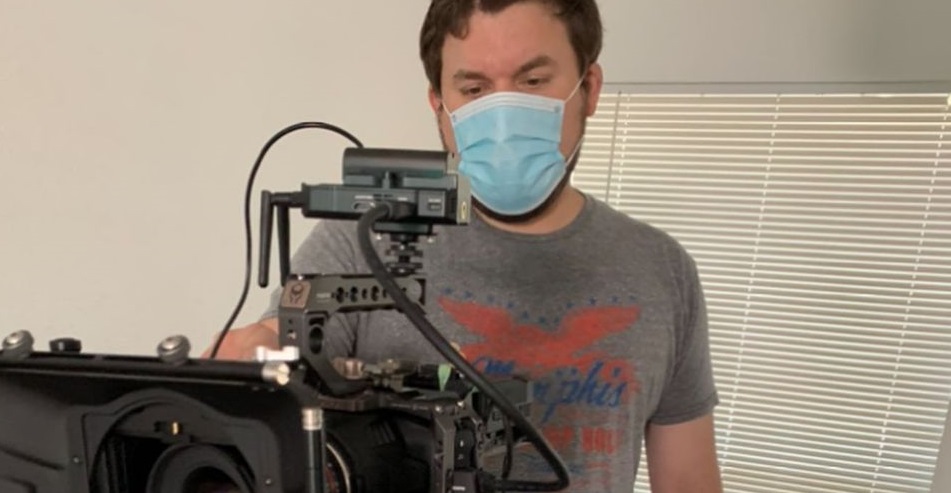 As if getting a film up isn’t hard enough in itself, LOVE AND DANGEROUS TIMES helmer Jon Garcia decided to film his right in the middle of the Coronavirus pandemic!

Congrats on not only getting a film made – but producing one in the middle of a terrible pandemic!

Thank you, there were definitely a slew of obstacles we had to navigate but all together we were lucky we had our Grip/Gaffer/1st AD/second AD/UPM/ Sound recordist/craft services person Steve Avalon Gardner, we have just been calling him “crew.” We couldn’t have finished without him.

Was there ever any doubt that it could work?

Yes, there were many doubts. Luckily both Ian and I have production companies and had most of the necessary gear we needed. When it came to location logistics I would worry when we were filming in my building because we did not want to disturb my neighbors when moving lights and furniture around. We were filming in a very small space, a one room 329 square foot efficiency. We were also concerned about filming on the empty streets when most people were quarantined at home, we always felt like someone was going to come up to us and tell us to stop. We did write the screenplay pretty quickly, only spending the month of March dialing it it so we hoped we hadn’t rushed through but we were editing as we went along the 22 day shoot which allowed us to have clarity on the story we were telling. The script and our story was ever-changing however as the world was learning more about the virus in real time.

I believe you’re in Portland?

Is that were most of your features are produced?

Most all of features have been made in Portland, Oregon with the exception of my horror film “The Hours Till Daylight,” which was partially filmed in Austin, Bastrop, Corpus Christi, Texas. 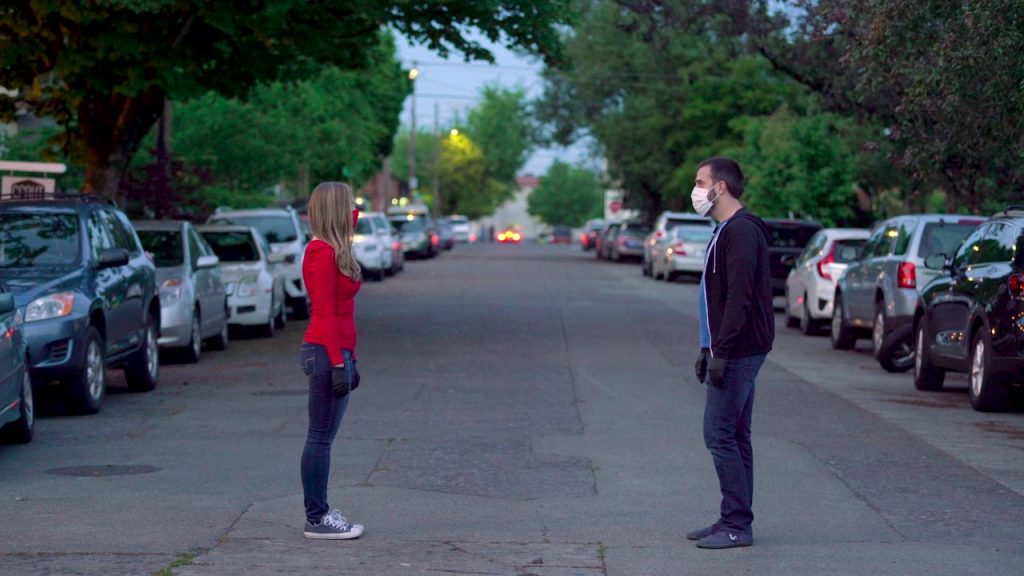 Yes, there are many talented filmmakers here in: Tara Johnson-Medinger, Alicia Rose, Ian Stout, Brian Padian, Scott Ballard, Eva Moss, Rollyn Stafford, Erin Galey, Robin Vada, Jace Daniel and so many others. It’s also a place where you will find extremely talented unknown actors. Regarding locations, It’s 45 minutes from snow, an hour and change from ocean, it has beautiful lush trees and a ton of beautiful spots to film. In recent years there has been a surge of bigger TV shows coming to PDX, so yes it’s a good and talented community.

And were your collaborators on Love in Dangerous Times, Ian Stout and Tiffany Groben, familiar to you before you cast them?

I only knew of Tiffany but had heard good things. I did see her in a play a year before we started filming LIDT and I thought she was a very vulnerable and generous actor.

I’ve known Ian for years and we’ve been friends for a long time and we’d been in the some of the same acting classes and I’d hired him as sound operator in one of my previous features.

What would you say made the actors that perfect picks for their respective roles?

I think there was only a certain short list of people that we could have surrounded ourselves with to make a film during a pandemic and this was that group. We weren’t 100 percent positive until we were off and running but it didn’t take long for us to figure out that we’d found the right folks to make a film under these circumstances.

We were open about our fears of making a movie during the pandemic from the beginning and we set our boundaries early and talked about what we were comfortable with and not comfortable with. As a group we all seemed to avoid conflict without letting things build up, we tried to talk about any foreseen issues before they became problems, knowing that the pressures of the filmmaking process would be followed by the pressures of living life in a pandemic once we left set. It was like being stuck in a science fiction movie while making a science fiction movie, there was no emotional break. There was a lot of love on set and there needed to be.

Being that the film was rushed into production, did you encourage a lot of improvisation from the actors?

There was definitely some improvisation, but some of the improvisation sounds scripted and some scripted dialogue is actually improved which I think is interesting.

Did the film change much, due to current events, as it went on?

Yes, as we learned more about the virus, our story kept evolving. We were definitely putting the fears we had about the state of things into the production during that time. We filmed mostly chronological, which was helpful. For the beginning of the film we had to think back to how things were a month prior but as we worked the story into it’s present we found that we had to adjust some things to fit newly discovered facts about the virus and our reactions to them.

What was the primary motivation for making the movie when you did, sir?

Honestly, for me, I tend to delve into work for solace and I realize that is not always the healthiest of habits, but for someone who is single and thousands of miles away from family, I think the creation of this film was a way to help me process the onset of the pandemic and the multitude of fears that come as a result of it. We also wanted to create something relatable for the times. It’s not just for single people looking for love but for all folks who are putting on the mask and trying to live their lives in spite of the state of things.