Overall, one can do far worse than spending an hour and a half exploring Instant Karma

Something fantastic happens to Jeff and Samantha: Karma heaps gifts upon them, but is it a blessing … or a curse?

Jeff (played by Stew Jetson) has hit his personal rock bottom as the film opens. He has been laid off from his new computer job, and he’s driving for U-LIFT (…and that’s how indie filmmakers avoid being sued by similarly-named companies, boys and girls), he has to deal with an overbearing mother – whom he refers to as “condescending,” and it’s hard to argue with that assessment – at least at first. Then…his car, his ONE way to make a (not-so-good) living, breaks down. This poor dude cannot catch a break.

And yet…the viewer is rooting for Jeff – he reveals his generous, selfless nature early in the film, in a couple of ways, thus endearing himself to the viewer.

(Technical note – today’s indie filmmakers are so blessed to be able to get fantastic – and comparatively inexpensive – production value due to the use of drones. There are several sweeping overhead drone shots that really make one forget the budget limitations. These shots get the film “out of the car,” where, by necessity, so much of the film takes place. This keeps the film from feeling too stagey and claustrophobic. Now…back to the review…)

The film asks the existential question – at what point do seemingly altruistic deeds twist into becoming selfish? And…what about the unforeseen ripples, good or bad, caused by our good deeds? The film sensitively and movingly explores these questions, in ways that feel realistic and possible.

Now, the film takes a left-of-center dark turn in Act III, and this is the one aspect of the film that feels less than organic, at least to me. I was just settling into the sweetness of the story, curious as to where fate, etc was taking the characters … when I felt almost like I stepped into another film.

But overall, one can do far worse than spending an hour and a half exploring Instant Karma. And…the film leaves the viewer to ponder some important questions. Isn’t that one of the purposes of art?

INSTANT KARMA is now available on:

The DVD will be available via Amazon.com, Bestbuy.com, Walmart.com, and Barnesandnoble.com by late July. 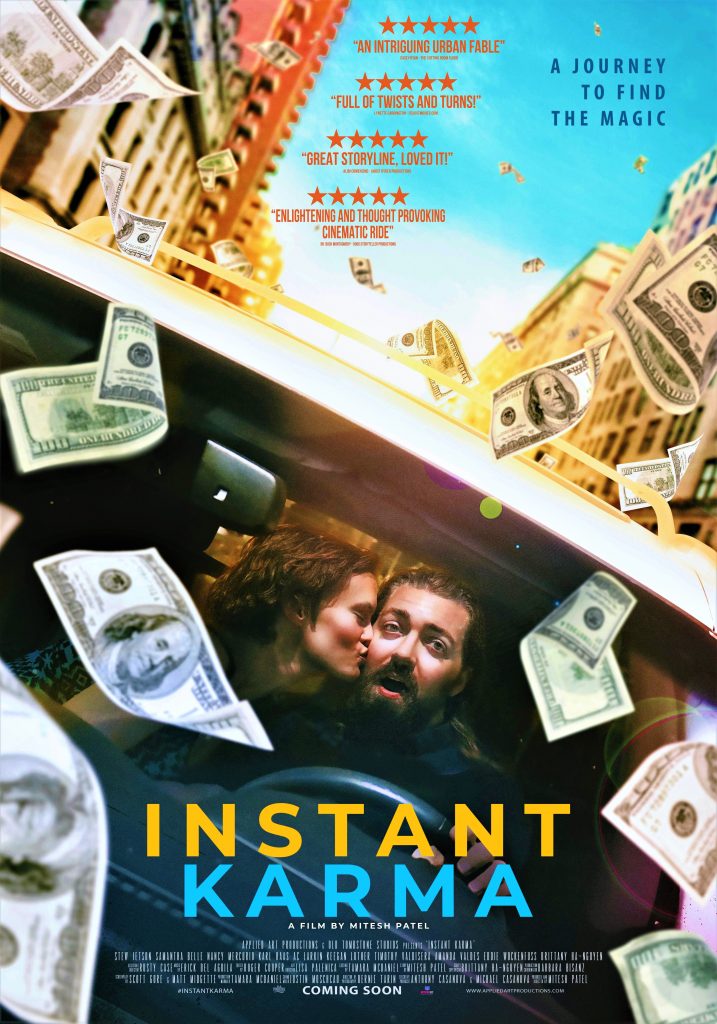